“The Government Inspector” inspects us all 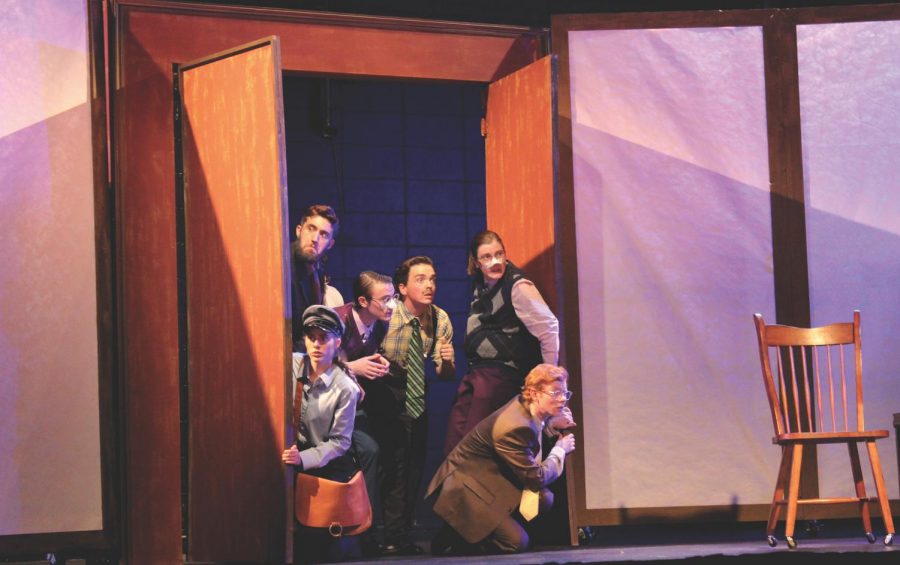 “The Government Inspector” was written by Russian dramatist Nikolai Gogol in 1836, but it remains timely today.

Saturating the stage with mirth, Westmont Theatre’s production of Nikolai Gogol’s satirical play “The Government Inspector” left a humorous yet haunting sting. The show takes place in a small town in Russia, and the cast consists of the most prominent members of society, including a skittish school principal, an exuberant atheist judge, and of course, the well-dressed and perfectly-moral town mayor. Gogol’s critique exposes the corruption of governmental systems in even the most unassuming of places, proving relevant not just to 19th century St. Petersburg, but also to many currently-thriving political hierarchies. Between the laughter and merriment lingers a note of caution, a slight air of relative discomfort, and a whispering of encouragement from director Mitchell Thomas: “So tonight, we gasp, laugh, cringe and cheer! Tomorrow, let’s get to work to make this play less relevant to the future.”

Gogol’s narrative follows a wealthy and irresponsible young man known as Hlestakov (Luke Spicer) to the small Russian town, where the townspeople await an official government inspector sent from the Czar himself. Along the way, the townspeople mistake Hlestakov as the inspector and begin to cater to his every desire, not realizing, as he plays along, that he is the epitome of frivolous desire and fancy. He is anything but an official government inspector.

Interspersed between witty banter and magnificent hilarity, the mystery of the inspector still lingers on stage, but as the cast so powerfully delivers line after line of politically charged content, the mystery fades to the edges of the stage and pure artistry takes over. The audience is captivated by the characters’ charisma, especially as the twin-like Dobchinsky (Sam Stroming) and Bobchinsky (Ben Thomas) gallivant across the town seeking free soup and adventure. The iconic duo cleverly contrasts the rest of the town, and although they are sometimes seen as foolish and incompetent by their neighbors, they are the most honest and authentic members of the community. Although multiple townspeople claim them to be “stuck in their own world,” their loyalty goes overlooked as the magnitude of their humorous mannerisms shroud the political corruptness of the town. Stroming and Thomas magnetically embrace their roles and truly become the most loved characters; not a moment of their onstage presence goes without at least a chuckle or two.

In a complex dance interweaving political corruption and foolishness, the mayor (Justin Sharp) continues his tainted history of bribery to convince the extravagant Hlestakov to spare the town’s reputation. One by one, the townspeople join in the mayor’s schemes, and before too long, each and every person is involved in a con in some way or another. By the end of the production, the audience finds themselves unsure if the proper thing to do is to laugh hysterically, or marinate in uncomfortable silence.

as that of 19th-century Russia, but also many modern-day systems. Gogol’s powerful representation of the corruptive nature of man warns viewers to not fall onto that same path, and claims that it may only be possible to accurately critique flawed systems under the spotlight of satire.