Why Batman is the best superhero 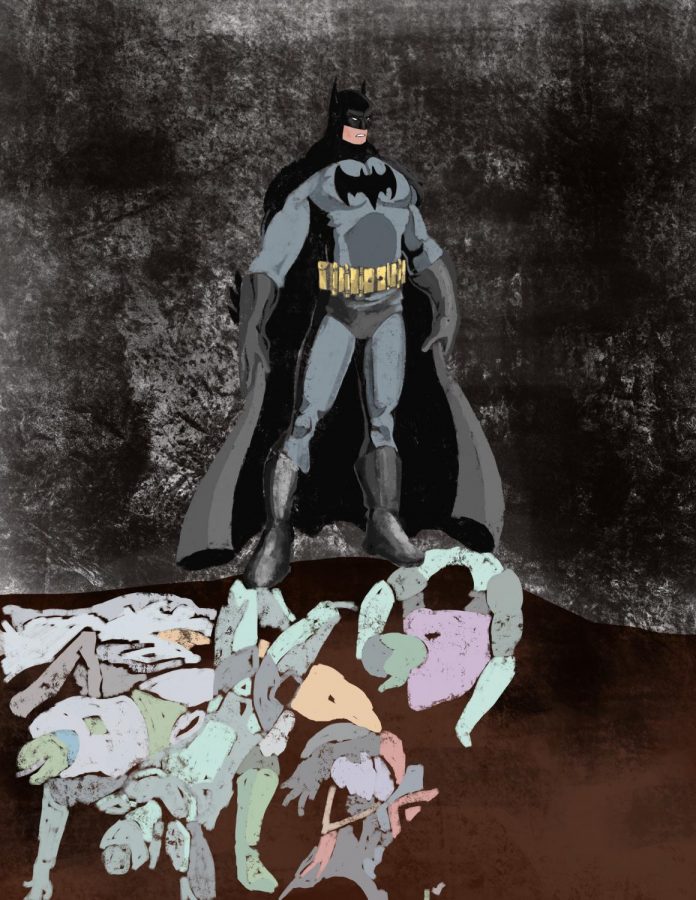 With almost as many adaptations and incarnations as single adaptations of other superhero narratives, Batman proves time and time again to be the greatest superhero put to comics, TV or the big screen.

Bruce Wayne’s appeal largely comes from his relatability as a normal human being, having no superpowers of his own to rely on in his crusade against crime. Unlike many of his Justice League counterparts, or Marvel’s own set of supers, Batman has to utilize his natural abilities of deductive reasoning, years of constant physical training, and his own strength of will to save the day.

As audience members, we constantly witness the human in Bruce Wayne getting continually beat down, both physically and emotionally. There is no one weakness, no kryptonite that spells specific doom. Instead, Batman can be hurt by anyone and anything, but always perseveres to rise above his own shortcomings.

A common critique leveled against Bruce Wayne has to do with his economic status as he belongs to the wealthiest of the 1% and comes from one of the richest families in his respective fictional universe. However, this criticism, while certainly not unwarranted given the many examples of staunch classist snobbery we have in our own society, cannot be placed fairly upon Bruce himself.

As a billionaire, Bruce constantly uses his financial resources for good, in both Gotham and the larger world. In most of the media that portrays Batman, WayneTech Industries, Bruce’s company, is responsible for countless fundraising and community outreach programs that seek to better the lives of the less fortunate members of Gotham society.

Only after Bruce has given away all he possibly can in order to ensure a better life for others does he don the persona of Batman. Batman exists primarily to go beyond the limits of Wayne’s money to better society and preserve justice in a city dominated by psychopathic egomaniac criminals.

In anticipation of the critique that many of the Gotham supervillains would not exist apart from Batman’s presence, I offer Season Two Episode Nine, “The Trial” of “Batman: The Animated Series.” This episode, as its title suggests, features the supervillains of Gotham society who capture Batman and subsequently put him on trial. Despite their own biases, the villains cannot help but come to the honest conclusion that they themselves are responsible for their own wicked activities.

To a greater extent, most of these villains share something in common with the very hero they fight against. Both Batman and his rogues gallery have fundamental trauma that serves as the motivation for their actions. The villains represent those who are unable to get the help they need or unwilling to change in order to move past their trauma. Bruce Wayne, however, despite the horrific experience of witnessing his parents’ murder, is able to come to terms with his trauma to become a hero.

Of course, a ready comparison can be made between the Dark Knight’s Bruce Wayne and Iron Man’s Tony Stark, given that the two are billionaires who use their riches to make themselves powerful heroes. However, this view can readily be broken down when one looks at the rather obvious differences between the two.

For instance, Tony Stark is a rich playboy through-and-through who doesn’t bother to separate his identity from his superpowered persona. Bruce Wayne, on the other hand, carefully hides and separates his life as the Caped Crusader from his false face as the nonchalant billionaire jerk. Knowing that revealing his identity as Batman would jeopardize the safety of his loved ones, Bruce lives a difficult double life, constantly sacrificing his own happiness for the greater good. Rather than pursuing any attempt for a normal, fulfilling life, Bruce chooses instead to let go of his own personal desires in order to be the hero Gotham so desperately needs.

Another key difference that puts Batman above Iron Man is the radical split in Bruce and Tony’s personal motivations to take up the superhero mantle. Tony Stark is primarily motivated by his desire for self-improvement and rapid innovation. He becomes Iron Man largely to clean up the international messes he was partially responsible for as head of Stark Industries. Before Stark became Iron Man, his laziness and own responsibility allowed Stark Industries to be infiltrated  by those who used its vast riches to develop weapons of mass destruction. Bruce Wayne, however, has been motivated by a desire for justice ever since he was a child, after he was forced to watch the murder of his parents. He dons the cape and cowl not because of any desire to fuel his own ego, but because he believes wholeheartedly in making the world a better place, which almost always happens at his own expense.

Batman, time and time again, rises above his inner demons to conquer evil for the sake of good. Despite the murder that led to his creation, the Dark Knight holds fast to a vow to never take a life, unwilling to continue the violence that destroyed his young innocence. Because of this embrace of one’s inner darkness and inner shadow, Batman becomes a character many relate and look up to.

At the end of the day, Batman’s humanity and self-sacrificial crusade for justice makes him the greatest superhero of all time, a figure that will persist throughout many interpretations and cultural adaptations.