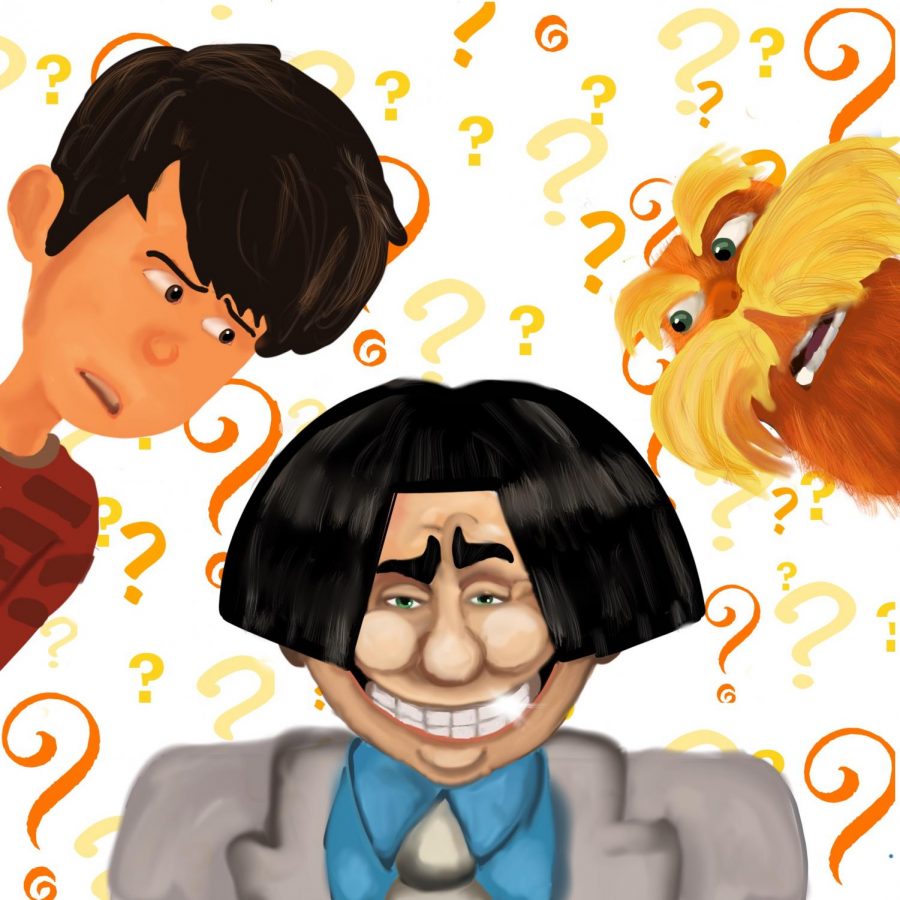 With his black bowl cut and his discourteous demeanor, Aloysius O’Hare is undoubtedly the bad guy, right? Wrong! This may come to you as a shock, but O’Hare from “Dr. Seuss’ The Lorax” isn’t a villain. Villains fight to cultivate cruelty or immorality, yet O’Hare fights the Once-ler’s overzealous and exploitative venture into deforestation, transforming Thneedville into a thriving utopia where every citizen can’t help but sing with joy.

Every street exudes equality until Ted, the lovestruck tweenager, comes along and decides to destroy the plastic paradise in an effort to acquire Taylor Swift’s affections — I could understand if it was Beyoncé. The town turning against O’Hare makes no sense. O’Hare hopes to preserve Thneedville society in which the only present suffering is a twelve-year-old’s crush on a high schooler.

How Ba-a-a-ad can he be? Turns out, good Ol’ Oncie is pretty bad. Good thing O’Hare and his air breeze by and save the day. The Truffula trees the Once-ler needs for the thneeds take a turn for the worse when the Once-ler refuses to plant new trees and runs out of resources. With no trees, the forest dies, taking all the wildlife and the air with it. Without O’Hare’s air, people cough and gag due to the smog.

Selling air is the only way to make sure O’Hare can continue to make fresh air for the people of Thneedville to stay healthy and preserve their paradise. The money O’Hare makes goes straight back into the factory to make more clean air.

Now you might be thinking that there’s no way the people of Thneedville are happy buying air, but O’Hare sets the story straight in his introduction. He sings about people buying his air, even though it’s free. The people roaming the streets, singing and living their best lives never had to pay a cent for air in the first place. They walk about breathing fresh air without paying for it. Coughing and gagging only overtake people outside the city’s walls, but people don’t have a reason to leave O’Hare’s paradise anyway. They get to sing and dance every morning in the corporatocracy that cultivates a flourishing community filled with equality and joy.

As the opening song suggests, the people live in paradise. They even go as far as to say that they can manufacture dreams. You dream of a sunny beach day in the winter? Well, they have a beach open all the time. What about skiing in the summer? There’s a snowy slope for that, too. People even drive around in massive Hot Wheels taken straight out of our childhoods.

Beyond boasting sun and snow, O’Hare’s utopia holds equality in high regard. Every street, house, and lawn looks the same. Each person gets the same opportunity for happiness as everyone else. No one looks up into the night sky dreaming of a better tomorrow, because O’Hare already gave the people of Thneedville a better tomorrow.

Now, I know what you’re thinking: but what about the trees? There’s no way to replace the natural beauty trees bring to this world. Well, at that, I’d show you the brand new Oakomatic 5000. It meets all your tree needs! No dirt, no leaves, no problems. For only eight small payments of $29.99, you can enjoy all four seasons at the press of a button. The first 500 people to order online get an extra season. DISCO!

Now would a bad guy give away trees basically for free? I don’t think so. Only heroes would be so generous, and I’m sure you know how much of a hero O’Hare is: he saved Thneedville from the Once-ler and created a paradise full of equality, joy, and dreams.

Disclaimer: Trees have been known to catch fire spontaneously during winter. Keep out of reach of small children, animals and most humans. O’Hare Industries is not responsible for any property damages while the product is in use. For best results, pair with O’Hare Industries’ double-A batteries. Remote sold separately.