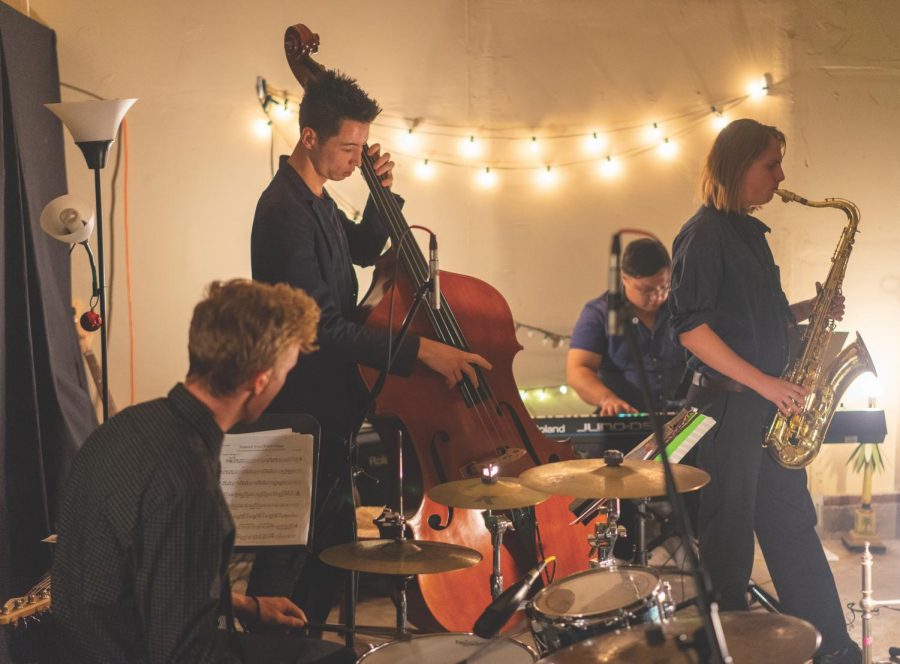 An estimated 120 people arrived on Friday night to crowd the couches and flood the driveway of a Santa Barbara house for the latest musical phenomenon — an open garage concert featuring a blossoming jazz quartet known as The Dumpster Cats.

Recent Westmont graduate Jay Real is one of the founding members of the quartet, along with current senior John Butler. He commented that starting the band was originally Butler’s idea, after the two of them stumbled upon a Latin jazz club one night during the Westmont College Choir Tour in May and became incredibly inspired. “With this idea,” Real noted, “when we arrived back in town, he [Butler] took the initiative to start a group text to get a rehearsal together. We met in the rehearsal room at the music building, and gave it a shot; we liked working together but things were for sure still experimental back then; it was late May.” In addition to Jay Real on keys and John Butler on percussion, the quartet also consists of Tim Beccue on bass and Simon Blondell on saxophone. The four members knew each other before creating the ensemble, already knowing enough about each other and their individual musicianship to be confident they’d work well together collectively.

Aside from exciting recognizable video game themes, Friday night’s setlist highlighted original compositions as well as arrangements of classic jazz pieces, showcasing the versatility of the new up-and-coming band. The Dumpster Cats instigate a refreshing new sound: an intermingling of the classical and modern, a fusing of layered textures in a delectable aroma of pure jazz.

While the quartet may have small beginnings, it has big dreams. When asked about his vision for the group, Real mentioned that the group began by playing together in the rehearsal room on Westmont College’s campus, not necessarily expecting to hold concerts. After having gained traction in the community and played a few gigs, their views shifted, leading to their interest in hosting concerts of their own, such as Friday’s, which was held in Real and Beccue’s garage.

“I wasn’t really expecting to be a quartet that held concerts, so that was for sure a huge change. I was hoping that we could do a few small events and maybe a gig every now and then, but the vision really changed after our first concert in July,” said Real. “I mainly wanted to get a feel for what it was like to play with the guys, but that first concert put a lot of things into perspective for us — such as wanting to do more concerts! I think our love for performance has been a huge surprise; but it’s one I welcome with open arms.”

The Dumpster Cats plan on continuing in their musical endeavors, hoping to soon play downtown at the SoHo Restaurant, along with other venues that make wider space available to a more expansive audience. Ultimately, their goal is to host monthly shows, but jazz enthusiasts can certainly anticipate a Christmas-themed concert this upcoming December. Real hopes to convey to listeners that “our main goal is to give everyone a good experience, and to introduce them to jazz in a way where everyone can have a good time.” He encourages supporters to follow their Instagram page @thedumpstercats, where they’ll continually provide updates on concerts and venues.