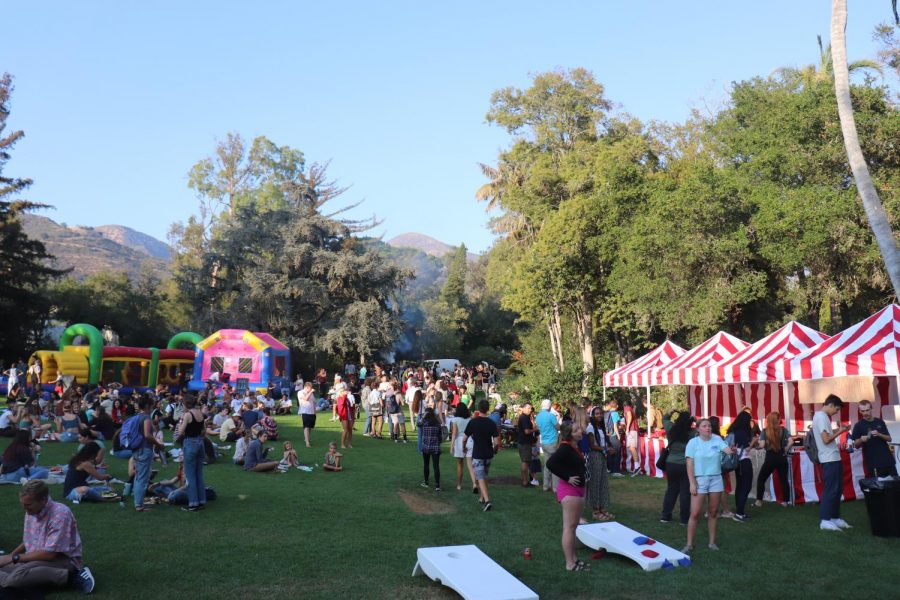 On Sept. 7, 2021, Westmont students explored new interests at the Community Picnic. Over 30 clubs filled Kerrwood Lawn with their tables covered in snacks. Tons of clubs — from Friendship Bracelet Club to Polo Club — ensured that each student could find their niche.

Many new clubs debuted at the picnic and diversified the opportunities for their peers. The clubs were a showcase of the creativity and uniqueness of Westmont students and the ways they take action in their community. As second-year Simeon Michelson exclaimed, “I didn’t even know that we had this many clubs.”

Besides the clubs, there was a barbecue spread, bounce house, photo booth and games. Students tried their luck at ring-toss and bowling, played with props at the photo booth, and spread out on the lawn to eat together.

The bounce house sparked a lot of competition and a few bruises as students raced through. Champions dove out of the end of the bounce house, but Westmont missed out on a spectacular performance from Sofia Pela who said, “I will not be partaking in the bounce house because I don’t want to make everybody jealous of my skills.”

For half of the students at Westmont, this was their first community picnic. Many eager first-years connected with upperclassmen pursuing the same interests as them and found unique spaces to grow and connect. As stated by first-year Morgan Edwards, “Coming out of COVID, I’ve been waiting for this, … so I’m not overwhelmed by the people, but I’m just really happy to be here.”

Second-years had a different perspective, as they remember their masked and restricted Westmont and Zoom orientations. For many, it still feels like they’re in their first-year experience. Second-year Grace Williams explained, “I’ve never been to the Kerrwood Community Picnic before because of COVID, but it was really nice seeing the Westmont community come together like this. One of the things that surprised me was my excitement and enthusiasm for joining new clubs, including NSTEP. I’m not a dancer but I’m excited to see where it leads.”

The number of people present at these events can stir up anxiety for many students who, after a year of tight restrictions, are overwhelmed by large crowds and the sheer amount of options available. Second-year Simeon Michelson offered his perspective, saying, “I felt overwhelmed last year so it’s even more this year, but it’s fun to get to present yourself again to the new freshmen.”

Despite being somewhat overwhelmed, Michelson also expressed appreciation for what the event accomplished. Michelson pointed out that, if through Westmont clubs, students found opportunities to “keep doing something that’s been home to them, [then] they can find that home at college.”