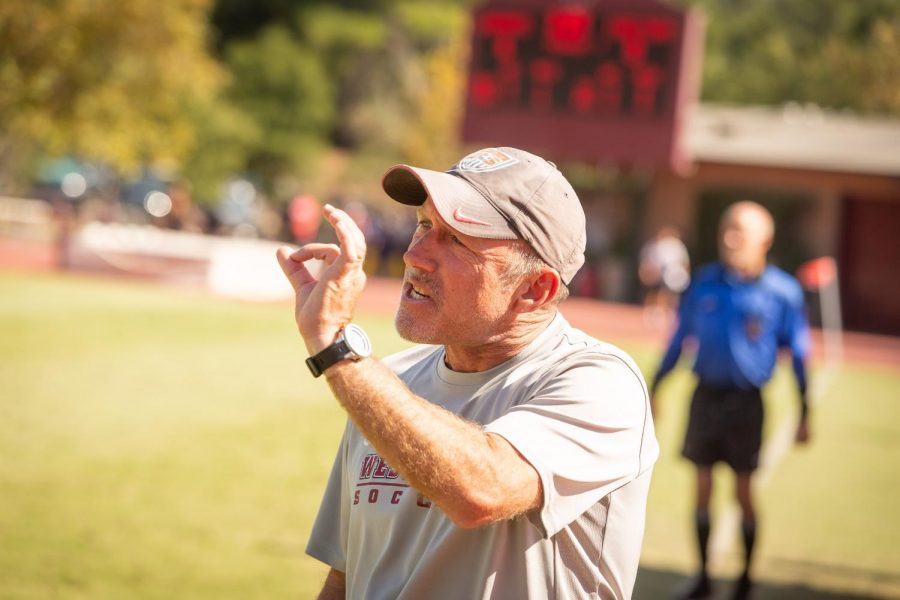 As the school year commences, the Sports Section of the Horizon will take a deeper look into the coaches that lead Westmont athletics. This week, we will highlight the men’s soccer coach, Dave Wolf.

Westmont’s men’s soccer Head Coach and kinesiology associate professor, Dave Wolf, had a traditional “Midwest” upbringing in Wheaton, Illinois, in the 1960s. This upbringing included enjoying the freedom to roam the streets and neighborhoods with his friends and experiencing “play,” no organized practices or adults present, just kids playing, which is where he believes much of his development as a person and an athlete was formed.

His father Herbert Wolf, an Old Testament professor at Wheaton College, played an important role in his theological beliefs growing up. He was heavily influenced by the example his father set. Coach Wolf said, “I would point to my father’s daily commitment to start every day, without exception, in prayer and reading God’s word. That discipline in my own life continues to be foundational for me.”

Much like many athletes in their journeys into the world of sports, Wolf started out as a triple sport athlete and competed in soccer, basketball, and baseball. He stuck with all three up until his senior year of high school, when he then chose to narrow his focus on soccer in hopes of pursuing a professional playing career. This worked in his favor, as he went on to play Division III soccer at Wheaton College and then professionally in both the Major Indoor League with the Chicago Sting and the National Professional League with the Detroit Rockers, Indiana Kick, Memphis Storm, Illinois Thunder, and Chicago Power.

Reflecting on major events that shaped him into the person we know and love today, Coach Wolf referred to the most impactful conversation he had with one of his college coaches, Bret Hall. This five-minute conversation, in which his coach proceeded to “call him out” on issues that had become blindspots to him in regards to how he treated his teammates, allowed him to contemplate his actions and granted him the opportunity to change his life for the better.

Wolf also speaks very highly of his wife Jill and how she has positively contributed to his life and their move from Wheaton to Westmont. “She took a chance on me and had the courage for this big life adventure of leaving the Midwest for Santa Barbara. I wouldn’t have lasted one season without her.”

As he has been at Westmont for 31 years now, the college has played a major role in his life and the game of soccer continues to feature as part of that experience. All in all, the community, colleagues, and his players over the years have beneficially impacted him and made his experience here an enjoyable one thus far.