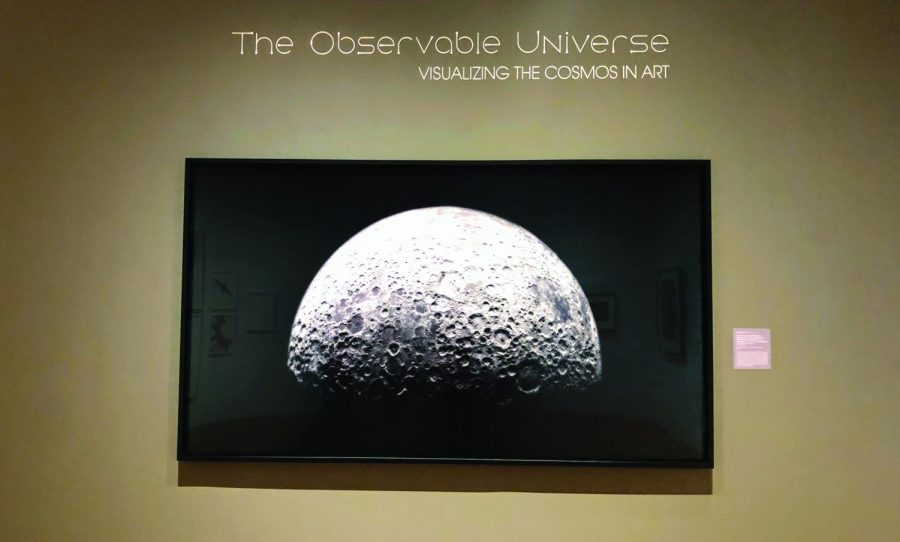 “The Observable Universe: Visualizing the Cosmos in Art” will be on display at the Santa Barbara Museum of Art until February 2020.

The cosmos: a whirlwind of chaos and beauty, defined only by what humankind is able to observe, understood only as the incomprehensible. Though our universe remains just out of reach of our understanding, scientists and theorists are hopeful that this is merely a temporary condition. For now, humanity discerns the abstract through the medium of art. From the time of the ancient Greeks with the discoveries of Plato and Aristotle and theories of perfection, to modern theories of an infinite universe and strings and the multiverse, humanity’s knowledge is grounded in what is observable and developed from the unobservable. Scientific knowledge continues to expand, as does art in its expression of scientific endeavors.

Art encompasses all facets of human existence, especially imperfection, beauty, and the search for understanding. The Santa Barbara Museum of Art encapsulates the endless pursuit of knowledge through the recent exhibition “The Observable Universe: Visualizing the Cosmos in Art,” which displays a myriad of intricately constructed visuals of the observable universe from the vantage point of Earth. The exhibit opened to the public on Sunday, Sept. 29, and will continue on display through Feb. 16, 2020.

Each piece of art displayed is a photograph, interpretive painting, or three-dimensional representation of some aspect of space. Whether the piece is a collection of digital images of a Google search on the full moon, or a 1981 photograph of Saturn’s moon Enceladus, or even a seemingly random fiberglass sphere dangling in the corner of the room, they all serve the same purpose: to astound, to intrigue, and to inspire.

Many of the works of art have been gifted to the Museum or purchased for the Museum’s collection, making them available for public viewing. Others are on loan for a specified length of time. Some of the most astounding pieces include “Southern Lunar Hemisphere,” a photograph taken from the Apollo 15 by Alfred Worden in 1971, and an untitled offset color lithograph by Ann McCoy from 1978. Like “Southern Lunar Hemisphere,” there are many photographs and straightforward representations and captured images of the world beyond our Earth.

Also displayed are many interpretive and experimental works, in which artists explore the impact of scientific observation and progression on humanity, and the reflection of humankind in the world beyond our reach. One example of this is “Portrait of Jim and Vivian” by Fred Tomaselli, a simple diagram of stars and constellations in the night sky. Instead of being labeled with the scientifically-given names, the stars are identified as various drugs, ranging from “tylenol” and “caffeine” to “sodium pentothal” and “nicotine.” Tomaselli’s intrigue about the connectedness of stimulants and depressors causes viewers to think more profoundly about the intricate web of not only the expansive universe, but also the state of mental and physical health, in a dualistic tangible yet abstract manner.

In addition to the current display of cosmological works, the Santa Barbara Museum of Art also offers gallery tours taking place throughout October, November, and December, and will be holding a conversational lecture entitled “Space and Wonder” on Oct. 17.