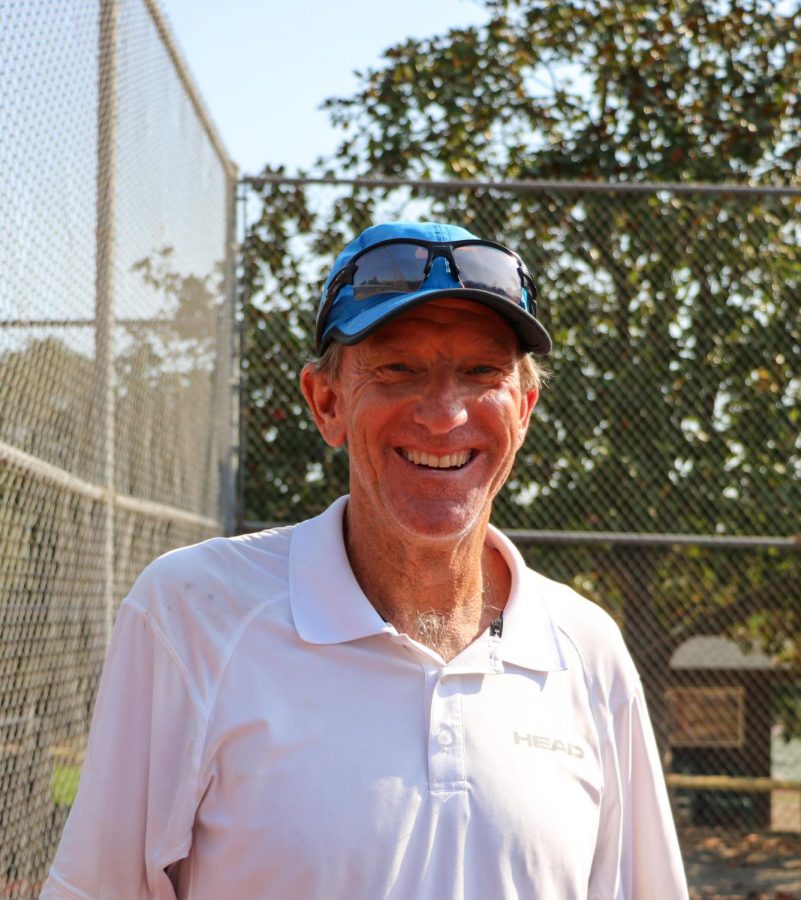 Coach Mark Basham is all smiles as he coaches his players.

Growing up in Santa Barbara during the 1960s, Westmont men’s tennis coach Mark Basham enjoyed playing sports, watching movies, and spending time with friends. He started playing tennis at the age of seven, when his parents joined Knowlwood Tennis Club — a family-oriented tennis club popular for its junior and adult programs. According to Basham, “Tennis became very popular in the 1970s when I was a junior player, and I was fortunate to have an excellent tennis coach, professional Jerry Hatchet, during my years learning the game.”

Furthering his academic and athletic careers, Basham continued playing tennis at UCLA, where he helped his team win the National Collegiate Athletic Association (NCAA) tennis championship in 1984. It was a momentous highlight for Basham as he won the deciding doubles match against Stanford University. Coincidentally, his father was actually a captain of Stanford’s tennis team in the late 1940s when he was a student there.

Apart from collegiate sports, Basham admitted “The academics were challenging, and I believe I would have done better in a smaller college. [Nonetheless], I am thankful for some of the close friendships that I made in college.”

When asked how tennis has impacted his life, Basham not only accredited the sport for allowing him to travel around the world, but also for allowing him to meet his future wife Sharon. They met at the SB Tennis Club, where Basham gave her tennis lessons.

Despite not growing up in a Christian family, Basham still felt connected to God as he prayed about his own fears and concerns. Fast-forward to 1993, Basham surrendered his life to Christ at the age of 31. A few years later at a Santa Barbara Community Church Retreat, he got baptized and affirmed that it was a “very symbolic act that helped grow [his] faith.”

Basham expressed, “I am very thankful that I joined SB Community Church for the wonderful teaching and fellowship all these years.” Wanting to nurture the faith of his players, Basham often tells his team that their faith comes first, encouraging them to take advantage of Westmont’s many opportunities to grow spiritually.

As he incorporates his faith with his coaching, Basham relies on God to help coach Westmont’s men’s tennis team:

“The influence that college coaches can have on their athletes is a powerful thing and needs to be taken seriously by depending on listening to the Lord for wisdom and guidance.”

Although Coach Basham always wants his players to give 100% when practicing and competing, he reminds them that studies take priority over athletics. At the same time, Basham does well to remind his players “never to take for granted the opportunity they have to represent Westmont and each other in hopefully very positive ways.”