Surfing takes on a new wave at Westmont 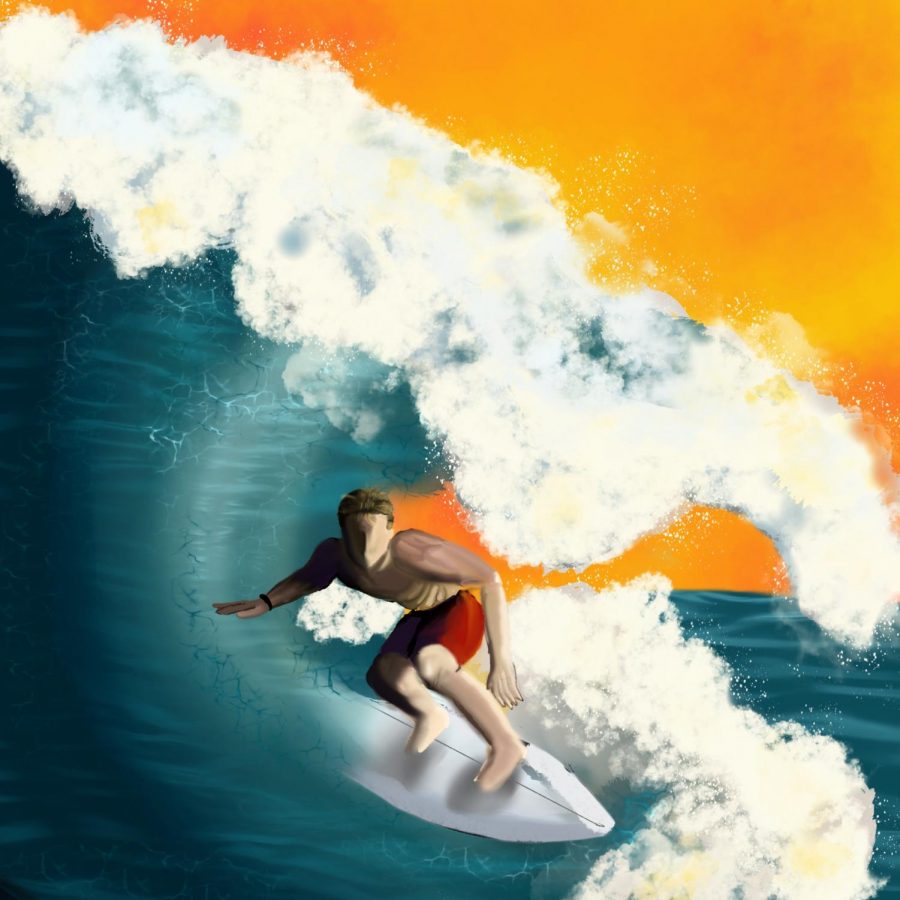 Surfing is a popular way to enjoy the water here in Santa Barbara!

First-year Cole Anderson is an easy guy to spot on campus, usually with a skateboard in hand and his beach-blonde, stereotypical surfer look. A buddy of his, first-year Andrew Bradshaw, describes Cole as “high-spirited.” Most people describe surfers as easygoing and laid-back, but the best group of people to ask about the ways of the waves would be the surfers themselves at Westmont.

Anderson described the water as a euphoric experience and explained how that has influenced his life. He said, “The ocean makes you slow down, be patient between sets, and sometimes not get any good rides for an entire session, but it teaches you to enjoy and embrace the presence of God when you’re out there.”

Many become captivated by the waves through the childhood classic “Surf’s Up,” or even the inspiring story of Bethany Hamilton, who became a surfing legend despite losing her left arm. Second-year Ciboney Hellenbrand, who has surfed since she was seven years old, gave some background for her inspiration:

“My mom signed me up for Ventura Makos Surf Camp and I really, really liked it. The people there were super nice and helped me get over some fears I had, and then I just kinda kept doing it from there. It’s kinda like riding a bike, where no matter how many times you quit you still know how to do it.”

Even so, the passion — or addiction, as some call it — is unique to each and every person who picks up a board. A common question amongst the non-surfing population is how long it might take to get the hang of riding the waves. For some, it takes a couple of years of solid practice to become steady. Others pick up techniques and tricks a lot quicker, but to each their own. Surfer-influencer Naima Green says, “You need only three things: your body, a surfboard, and a wave.”

Now, the important part! The various surf spots scattered throughout Santa Barbara make any ocean-dweller, as they like to say, “stoked.” Hellenbrand recommends Leadbetter Beach, a 15-minute drive from Westmont, not for beginners but for a more seasoned surfer.

Anderson approves of Rincon Beach, 18 miles down in Ventura. Rincon is the best in the wintertime, so for a year-round beach, check out Devereux Beach in Isla Vista!

While at the beach, you may want to learn some new slang to fit in a little better. “Kook” is a term for a beginner surfer who is totally lost. Ex: “Look at that kook trying to stand up on his board.” Second, “throwing” is when a wave is barreling or really strong. It can also be used as an adjective for something that is powerful. Ex: “Wow, that chicken parmesan from the DC was throwing.” Finally, to “shred” means to make something look easy because of a high skill level. Ex: “I absolutely shredded that test.”

Whether you’re just starting out or you’ve lost count of the times you’ve gone to the beach, Westmont’s surf culture is full of people excited to offer fellowship and hospitality to help make the ocean your new home.