How can we best honor her legacy? 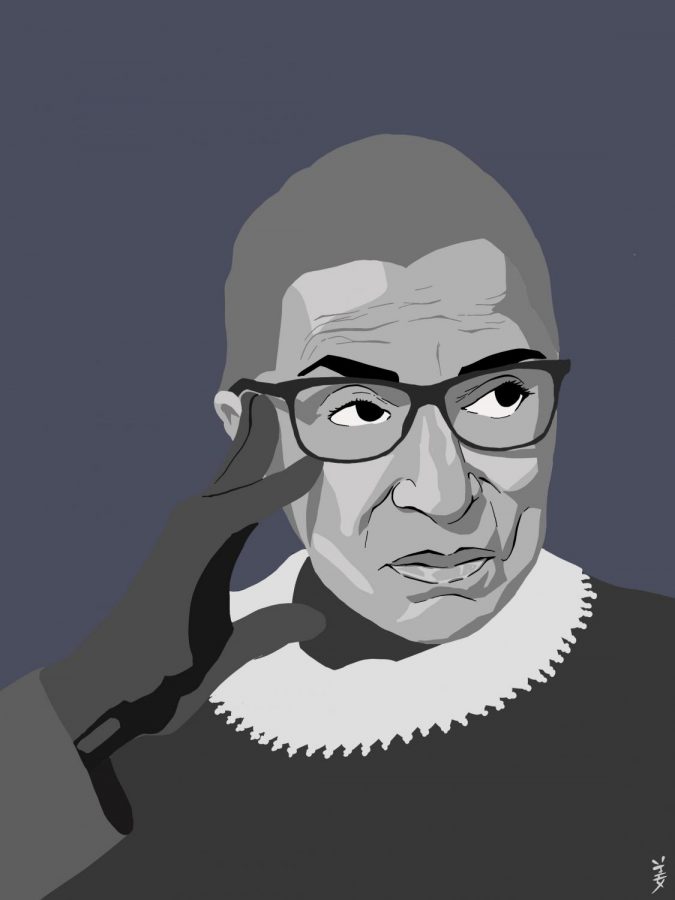 Roughly a year ago, the world lost one of the greatest women to have ever lived. After battling cancer for years and tirelessly advocating for women’s rights, Supreme Court Justice Ruth Bader Ginsburg, the Notorious RBG, passed away on Sept. 18, 2020. In the wake of her death, women all over the country feared the future as conservative lawmakers have long sought to overturn Roe v. Wade, which would limit a woman’s right to choose to abort or to give birth.

So, Ruth Bader Ginsburg. What’s the big deal? She served on the Supreme Court for almost 30 years and was only the second woman to be nominated to the court.

Before that, she helped found the Women’s Rights Project at American Civil Liberties Union (ACLU), which combated gender discrimination at every legal level. While working for ACLU, she argued six gender discrimination cases before the Supreme Court, five of which she won – an astounding record.

Women across the political spectrum owe a lot to Bader Ginsburg, as she relentlessly argued for equal treatment under the law.

In addition, RBG held a long-standing respect for women and their autonomy. Ranging from financial independence to reproductive rights, she adamantly asserted that women are strong and capable individuals who deserve dignity.

Back in 1972, as the ACLU took on the case of Struck v. Secretary of Defense, RBG wrote, “The decision whether or not to bear a child is central to a woman’s life, to her well-being and dignity. It is a decision she must make for herself. When Government controls that decision for her, she is being treated as less than a fully adult human responsible for her own choices.” In this instance, abortion legislation was seen as a way of controlling and coercing women into doing things they would originally not intend to do.

Ruth’s legacy remains relevant today because of her stance on reproductive rights and women’s autonomy. Women were afraid in the wake of her death for good reason. They feared a conservative court that would prioritize conception over humanity and work to overturn a case that has protected marginalized women and their right to choose for the past 50 years.

In a debate that has become highly politicized, we cannot be tempted to reduce such a gray and messy issue to a polarizing black-and-white. Banning abortions as early as six weeks, per the Texas Heartbeat Bill, does virtually nothing to impede women from getting abortions. Studies from around the world have shown that limiting access to and criminalizing abortion do not reduce abortion rates. Instead, they drive women in desperation to undergo illegal and often downright dangerous procedures, putting their own lives at risk.

An article in the New York Times highlights how an Oklahoma abortion clinic is already overwhelmed by Texans who have raced across the border. Realistically, many do not know they are pregnant by the time six weeks has passed, and this bill does not acknowledge the varied and difficult circumstances of the women facing abortions.

I am not advocating for abortion; pro-choice does not equate pro-abortion. As Christians, we can see abortion and we can grieve that this is a reality in our fallen world. Then we can go about educating women on matters of reproductive health, ranging from ensuring that sex education is a part of all school systems to making contraceptives widely available to empower women to take control of their sexuality. We can advocate for comprehensive health care, paid maternity leave and universally affordable childcare.

Ultimately, we cannot pick and choose where we value life. If we, as Christians, take such a vehement stance against abortion, how we engage with politics in every area must reflect our commitment to all life. We must advocate tirelessly for orphans and those in the foster care system. We cannot overlook the crisis of immigrants at the border and people without citizenship in our nation. We cannot forget about the millions of people incarcerated unduly and excessively, nor the folks who identify as LGBTQ+ and have been greatly hurt by the church.

Bader Ginsburg repeatedly and eloquently contended that the government should give women the respect and dignity they deserve, trusting their abilities to make their own decisions. As followers of Christ, we are called to love unconditionally, not letting the burden of caring for the least of these fall solely on the government’s shoulders.