The Met Gala: Actions are stronger than words

Pithy phrases will only go so far. 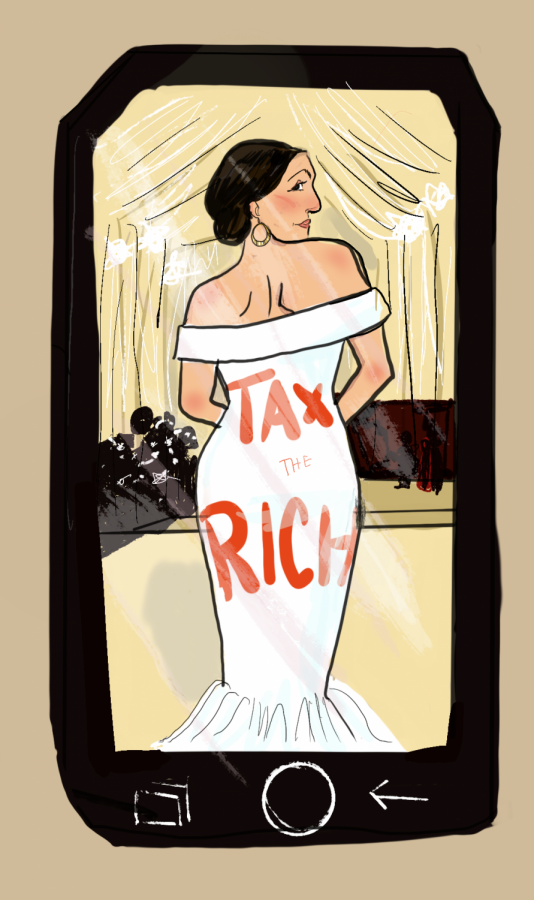 This year, on Sept. 13, the Metropolitan Museum of Art hosted its annual gala. With its theme “In America: A Lexicon of Fashion,” the event saw more than a few conversation-starting outfits. However, Rep. Alexandria Ocasio Cortez (AOC) wore perhaps the most Twitter-rant-inspiring dress of them all, a white dress that displayed in prominent, red text the words “Tax the Rich.”

The poignant message brought about two responses. One supports AOC’s use of her platform to draw attention to the wealth disparity in America. The other is outraged that a representative, who now makes $174,000 a year, would dare criticize the wealthy while attending an event that costs, on average, $30,000 a ticket.

Neither of these sides seemed concerned about the problem Rep. AOC addressed. It seems that the fire for engagement was rather a  desire to talk about the dress itself. Conversation soon turned highly personal and even invasive as internet and social media engagers desperately endeavored to protect Rep. AOC or point out her hypocrisy. Now, days after the event, it’s hard to think about those red words on AOC’s dress without hearing the different opinions or the sheer anger that followed.

Trends such as this, where an issue gets overshadowed by the personal details of the person drawing attention to it, are the problem. When an issue itself and the people suffering are put on the backburner and the majority of the conversation focuses on the messengers, we neglect to give the issue the time and attention it needs to heal effectively. Truthfully, we can’t help others through the political statements made by famous people.

So how can we help? Take the wealth disparity AOC brought up. How can we help the people affected? Well, for the average person, this isn’t a typical concern. Around 52% of Americans are in the middle class and thus have the slight luxury to overlook large social and economic issues.

Living in America already provides one with more resources than are available in many other countries. Yet even if you are middle-class, you may still try to make ends meet or just have the freedom to live your life. You may not think you have time to prioritize researching social issues like poverty.

However, many Americans do place a high priority on their media time. Here, the issue comes to a head. If you wanted to help the poor but didn’t have time to look into economic policy, the message on AOC’s dress at the Met Gala could be one of your only sources of knowledge on the issue. As you try to find ways to help by searching the internet, you’d be bombarded with more opinions on people than effective options to help the poor. You tried to attain some clear data to help the poor, and instead waded into a pool of muddy water.

We can no longer let the spotlight be stolen from the problems that so desperately need attention. It is time to begin filtering and clearing the water. While there are many ways to filter the streams of conversation, we can begin by entreating those in the public eye to humbly relinquish their megaphones and pick up their shovels instead.

If you are a politician, don’t argue with your political enemies on Twitter and TikTok about how to help people, just do it. Go meet with the poor and see what they need. Then, when you have really heard from the poor, invite your political enemies over for dinner and talk to them about how you can create a policy to reach an effective solution based on the knowledge you have gained.

Especially as Christians, we should embrace active and effective solutions. How does Jesus ask us to help? Well, to the rich young ruler, He says, “If you want to be perfect, go, sell your possessions and give to the poor, and you will have treasure in heaven. Then come, follow me” (Matthew 19:21). Jesus tells us to act, to go and give to the poor. In order to do this, we will have to sacrifice what we have, from our time to our possessions. Sadly, wearing a white dress with red letters on it or posting a Twitter rant costs very little.

In the end, no matter how beneficial it may be to their causes, we will doubtfully see AOC or any politician let their actions speak for themselves. Politics is a game of optics now, and silence on any issue could be a terminal error for them.

While we can’t control them, we can control ourselves. We can be the ones who lead by example and pick up our shovels to solve a problem before picking up our megaphones to speak about it. Moreover, we can heed the words of author Mark Twain, who warns, “Actions speak louder than words, but not nearly as often.” Let our actions speak louder and more often than our words. We can be people with words that bring the love of Jesus, and actions that bring the change He desires.