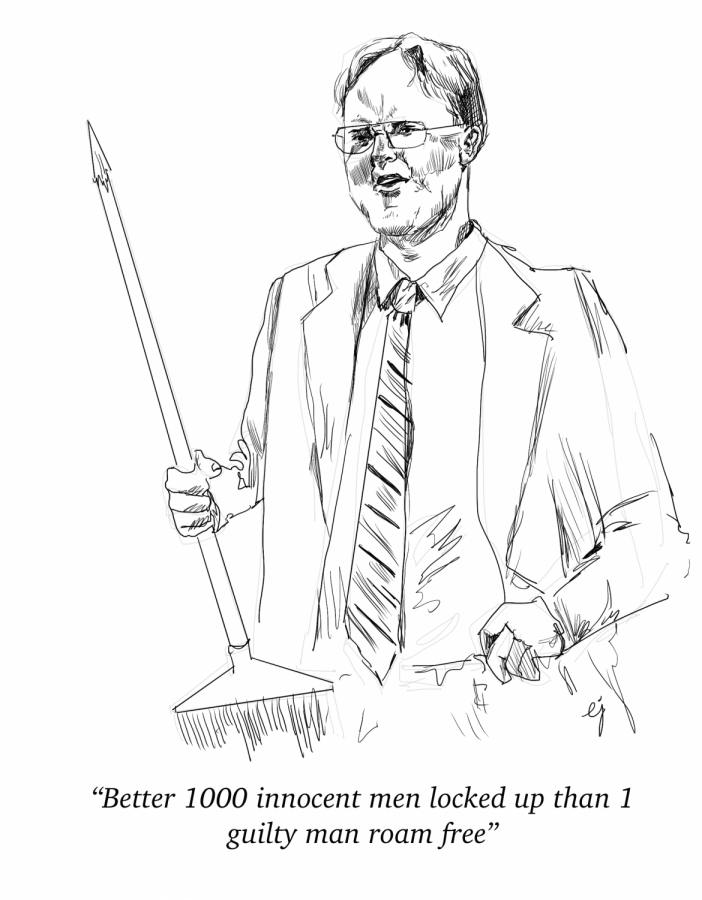 Cancel culture harms the innocent too

Dwight Schrute once said, “Better 1,000 innocent men be locked up than one guilty man roam free.” Obviously, this scene is supposed to be ironic, but lately, Dwight has not been far off the mark. Increasingly, the arena of social justice has moved to social media, where people can cancel each other for all manner of sins. Too often, the innocent get caught in the crossfire.

Here, I define cancel culture as unique to social media; people have been ostracized from communities for years for real or perceived wrongdoings, but social media enables complete strangers to pass judgement on the actions of others from across the globe. These interactions  — global groups of people exerting negative pressure via social media posts on wrongdoers — characterize cancel culture today.

People generally categorize cancel culture in one of two ways: either it’s indicative of a series of petty, politically motivated witch hunts designed to ruin the lives of innocent Americans or it’s a benevolent, grassroots uprising of citizens dedicated to calling out the wrongdoings of the powerful and privileged.

The truth is somewhere in the middle. I am confident everyone can think of at least one person who deserves to be canceled to the end that they are removed from a position of power. That being said, I contend that canceling does not hold the privileged accountable for their actions so much as enable people to pass uncompromising judgements on decontextualized people and their actions. In as much as this is true, canceling is a problematic practice that should not be encouraged.

Defenders of cancel culture frame canceling as a tool for the underprivileged to dispense justice and hold the privileged accountable. I intend to show that canceling is a poor tool to achieve these ends.

First, let’s look at whether cancel culture is able to distribute justice. Justice is defined here as “the quality of being just; fairness” and “the principle of moral rightness; decency.” The problem here is that the world does not subscribe to a singular moral code and everyone has a different definition of fairness. Things that seem absolutely morally wrong to some can seem absolutely justified to others — just look at issues like abortion or immigration!

Social media is an amalgamation of these differing views, such that justice is not dispensed equally. One example is the difference between Kevin Hart and Dave Chappelle. Both men are popular Black comedians with some problematic humor in their pasts. Hart was canceled on social media and did not host the Oscars in 2019. Chappelle has only faced censure in the past week.

The level of justice dispensed also differs: take Hilaria Baldwin and Prince Andrew. Hilaria Baldwin was accused of faking her Spanish heritage by adopting a Spanish accent. It’s an open secret that Prince Andrew engaged in the child sex ring cultivated by Jeffrey Epstein. Though they were accused of different offenses of varying degrees of seriousness, both faced a cancellation focused on humiliation through satire and memes. Neither faced any physical consequences. In contrast, Tucker Carlson, who was accused of racism like Baldwin, faced threats of serious harm in his cancellation, such that what started on social media ended with a group of protesters breaking down Carlson’s front door.

Additionally, justice through cancellation assumes that everyone has access to accurate information about the perpetrators’ actions. This assumption is rarely true and the spread of disinformation frequently leads to the cancellation of people who didn’t deserve it. Take the case of Ellie Kemper, who was accused of participating in a pageant run by an organization tied to the Ku Klux Klan. A week later, such claims were debunked, but only after Kemper had apologized and been the target of Twitter mockery for several days. Or look at Daniel Elder, who was accused of being a racist after denouncing white protesters who burned down a courthouse in Tennessee.

Often, it’s unclear whether the method of cancellation is even just, especially when it involves a heaping helping of mockery and ad hominem attacks. Take Kirstie Alley, who was canceled after posting a pro-Trump tweet. The focus of the cancelers wasn’t Alley’s tweet — it was her irrelevance, her ugliness, her lack of humor, and her stupidity. Adopting this kind of “ends justify the means” approach is dangerous and certainly isn’t the way to secure justice.

Having established that cancel culture is, at best, an imprecise, unequal tool of justice, I want to examine whether cancellation functions as a tool of accountability.

I want to begin by making a distinction between accountability and judgement. Accountability has relational connotations — you are accountable to someone or something. The relational aspect of accountability points to the possibility of redemption — you accept the consequences of your actions, but are not beyond salvation.

Judgement, on the other hand, is defined as “a formal utterance of an authoritative opinion.” Judgement is one and done. It does not require a relationship and it does not present the opportunity for redemption.

Cancel culture doesn’t hold people accountable — it pronounces judgement. That raises all sorts of questions about whether anyone on social media is qualified to pronounce judgement on another person, no matter how heinous they may seem.

I also want to point out that cancel culture is not confined to condemning the wealthy, powerful and privileged. The internet is littered with cases of normal, fallible people, who have no power over anyone and no resources to defend themselves, being canceled, fired from their jobs, even run out of their communities. Take the cases of Marlon Anderson, Aaron Calvin, Tanner Cross, Amy Cooper, Daniel Elder, Matthew Lohmeier and Nick Sandmann. You might think each of these people got what they deserved, but the fact remains that they didn’t hold positions of power that made them accountable to anyone, not even by association. They were judged, found wanting and bullied off the internet.

If cancel culture were a tool of accountability, cancelers would be held accountable for when they got it wrong, when they went too far, or when they crossed the line from canceling to cyberbullying. This does not happen — cancelers can slip back into the ether and pretend they weren’t involved. This lack of accountability on the side of the cancelers functions as a grant of absolute power; they can say whatever they want to whomever they want without consequences.

At this point, I’m sure at least half of you are convinced I am defending the actions of people like Peter Meehan or Ryan Adams — I am not. But I advocate for boycotting over cancel culture as a better way to call out wrongdoing. It minimizes harm, judges wrongful actions and prioritizes the voices of victims.

Social media boycotting involves unfollowing and unfriending people you feel should be judged. It means retweeting and liking the statements of victims and sending them a DM about how much you appreciate them sharing their story. If you are not a direct victim of the person being judged, do not post your own words or say hateful things, no matter how much they deserve it. Put your money where your mouth is and withdraw your support.

Withdrawing support and money as a way of signaling a lack of satisfaction is a far more effective way of getting the attention of powerful figures compared to posting something mean. Even better, it eliminates the need for ad hominem attacks. If you feel you absolutely have to say something, repost what the victim has said — someone who was embedded in the context of the situation and was directly harmed by the person in question.

Social media has given you power to determine who is innocent and who is guilty. Use that power wisely and choose not to cancel.