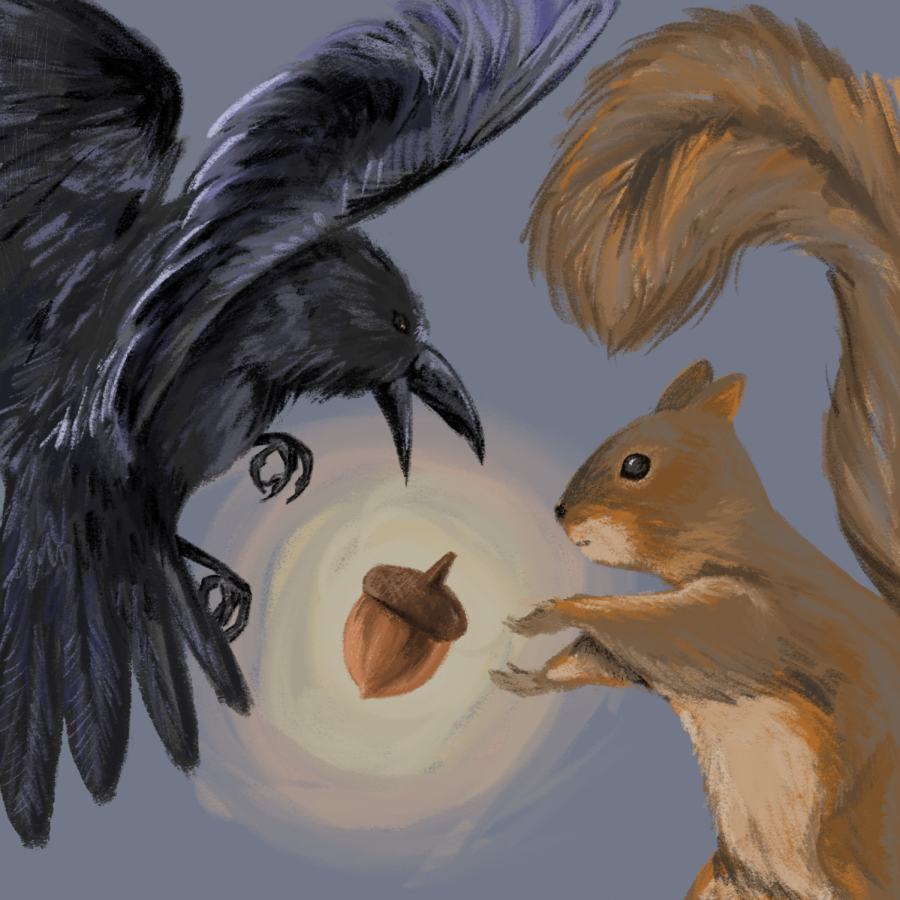 It is common knowledge that the deep-seated rivalry between the Squirrels and the Crows has lasted for generations. However, this animosity came to a head this past weekend when the Crows’ scheduled Homecoming Nutball game lined up with their first game of the season against the Squirrels.

Before the game, the right-wing forward for the Crows shared just how high the stakes were: “If we don’t win this, the Squirrels will never let us live it down.”

When asked if she was nervous, the Crow simply let loose a cocky caw of laughter and flew back to her teammates. The murder ruffled feathers and sharpened beaks high up in the tree designated as the Crows’ rest area.

The coach for the Crows is a wizened member of the community; confident in their victory, he shared, “These Squirrels don’t have a chance. Our strategy is our best kept secret and has been passed down for as long as we’ve been here.”

When asked about his training approach and the development of these strategies, he responded, “I obviously can’t let on too much, but I can summarize our basic strategy in one word: chaos.”

Then he, too, screeched a grand caw and took off. It seems the players picked up that behavior from their coach.

In a short time, the games began.

The Crows took on the offensive, swooping from their defensive position high in the trees to dart into a huddle of Squirrels. They scattered and the Crows took off with the nut.

This went on for a good hour or two, until the Crows had successfully scattered the Squirrels’ nut storage all over campus. Then, the second half of the games began. The Squirrels scampered about campus, searching for their precious nuts while the Crows waited for more opportunities to ambush and prevent their rivals from recovering too many points.

The Squirrels dodged in and around trees and scampered up trunks in their attempts to throw the Crows off their trail. One Squirrel found a whole stash of nuts hidden by a not-so-bright Crow and scored a major lead for the Squirrels.

However, the Crows, with their loud caws and knack for creating general mayhem, managed to pull away a victory!

After the game, the Squirrel’s midfield defender shared her thoughts on the rivalry, “The Crows think this is some kind of game? No, they just need to stop stealing our nuts! It’s not funny. We’re just trying to prepare for winter.”

When informed that the Crows called this their “Homecoming game” and had dubbed the sport “Nutball,” she huffed and twitched her tail, promising that “we will get back at them one day, but first we have to organize and rearrange the nuts.”

One older Squirrel that mainly sat on the sidelines for the Nutball game, offered a bit of keen observation: “The Squirrels can try to embrace the Crows’ chaos, but they get too wrapped up in their assignments and extracurriculars and to-do lists so all they focus on is nuts … and they eventually go nuts, too.”

With great fervor and no signs of stopping, the Crows proudly celebrated and announced their victory as they soared through the campus trees. Feel free to join their victory infinity loop, especially if you followed the tips from last week’s issue and are now friends with the victorious murder! Oh, and if you spot a Squirrel scampering away in shame, don’t hesitate to offer a nut in consolation.