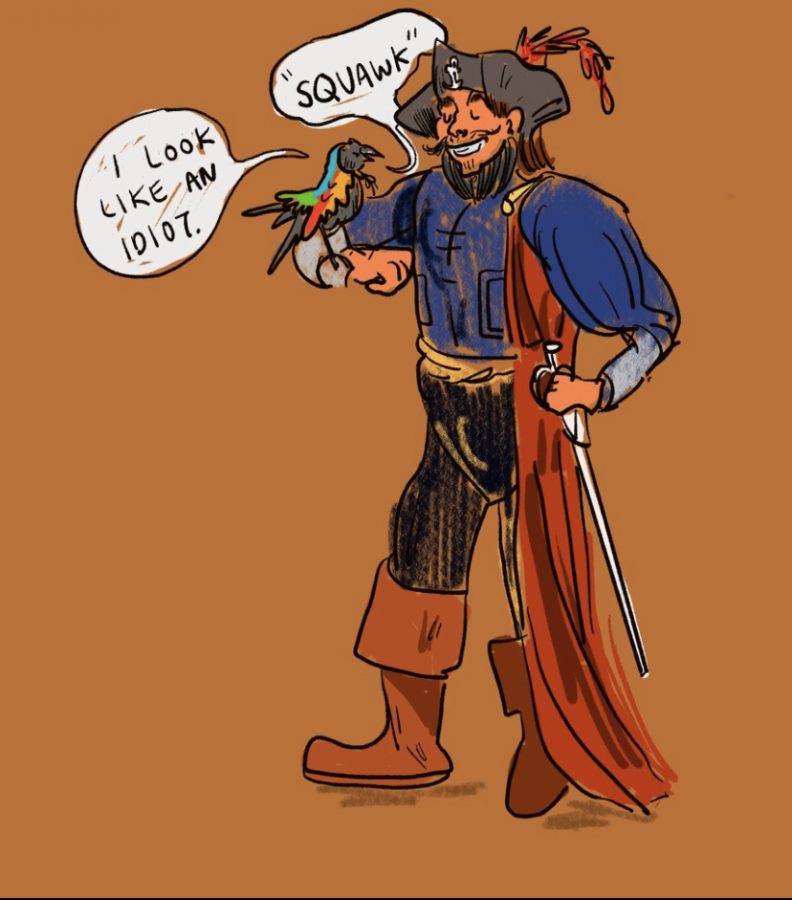 Student and Crow show off their pirate Halloween costumes

For those of you who followed the Capstone’s advice from our first issue of the Crow Column, you’re in for another treat! The bonding strategy we suggested has been a resounding success, as evidenced by the piles of thank-you letters and gifts taking up half of our office space. Now that student-crow relations are on their way towards developing a beautiful community, the next bonding event couldn’t come at a better time!

If you don’t already have Halloween plans — or if you do, they should be canceled immediately — take advantage of this holiday to spend some quality time with your CBF, aka Crow Best Friend. This may not come as a surprise, but the crows are particularly fond of the Halloween season! They love to fly around and take pieces of candy and shiny wrappers from doorsteps and candy pails, all while in homemade costumes that preserve their anonymity. With a new human friend in tow, your crow would love nothing more than to have you join in on their escapades.

Make sure to coordinate your costume with your crow buddy! At the Capstone, we know Westmont students generally lack this kind of creativity, so we came up with a list of costumes that have been major hits in previous years.

You, the human, can be a pirate! This costume continues the theme as you plunder for candy, and your crow can wear a colorful mini-boa and tiny eyepatch as your shoulder parrot. This costume is great for those who wish to feed into the kleptomaniac tendencies of your CBF.

If your CBF happens to be on the Crows’ nutball team, dress up in jerseys and go as a pair of athletes. Feel free to keep a handful of nuts in your candy bag for fellow trick-or-treaters.

Another idea is to go the beloved-animated-movies route! You can be Simba and your crow can be Zazu from “The Lion King,” or your crow can be Blu and you can be Linda from “Rio.” Or, take inspiration from the classic Dreamworks film “How to Train Your Dragon” and be the Hiccup to your CBF’s Toothless.

Don your wizard’s robe and grab your wand as you dress up as Harry Potter and give your crow a light sprinkling of flour or powdered sugar so they can be Hedwig.

Some crows don’t like the extra weight that comes with dressing up; if that is the case with your CBF, there are plenty of options where you can dress up with your crow as themselves! A classic witch perfectly fills this role, complete with a pointy hat, trusty broom and a trickster crow.

The next option is to be the Grim Reaper. This costume is best for overachievers who have sought to become friends with as many crows as possible. If you have an army of black-winged birds at your back whenever you’re on campus, this costume is perfect for you! All you need is a scythe — preferably fake — a mysterious black cloak and a horde of crows to follow in your wake. Alternatively, you could be a plague doctor, adopting your crow mask in place of the scythe, though make sure not to skimp on the ominous murder trailing behind you.

We hope you greatly enjoy this Halloween season, and while these costumes are bound to have a resounding success, we must request that you hold off on sending gifts and thank-you letters for help in finding your CBF, as we are running out of space in the office.