The band is challenging the student population on the definition of worship. 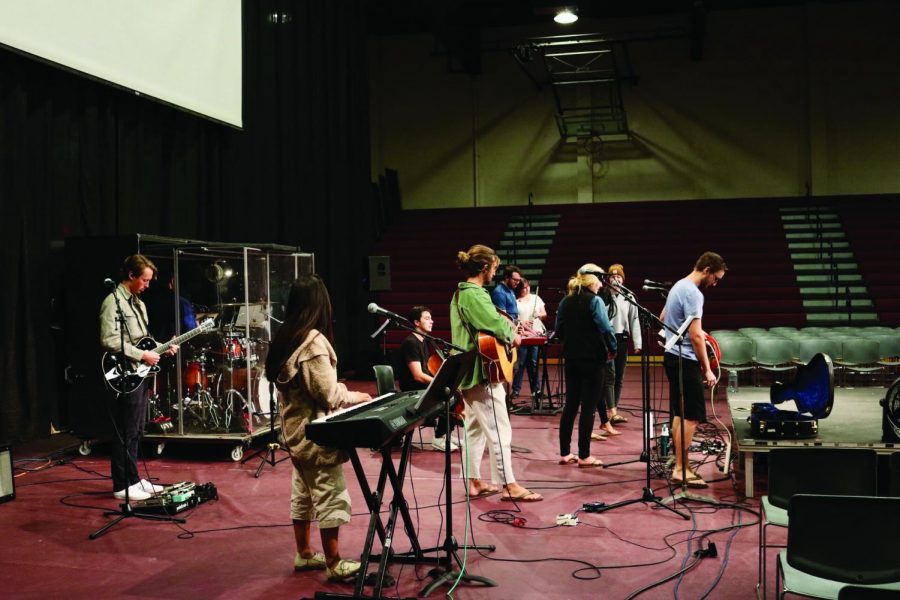 The Westmont Chapel Band, led by Eben Drost, guides worship three times a week. This year they’ve set goals for themselves to transform how Westmont worships.

The Chapel Band breaks the service into four sections. “We gather, we listen, we respond, and we are sent,” said Drost, the Worship Team Director. He continued by saying, “This basic pattern of worship is common in history and has biblical foundations.”

Through deep-seated prayer and contemplation,  Drost and the Chapel Team have already been able to accomplish some of these goals. Different art forms include spoken word by students and graphics on the main screen. And Drost has indeed given the Music Directors more artistic liberty to choose songs and which member of the team will be singing the song.

Drost said, “I trust them and I believe they have insights that I don’t. They’re more on the ground with the student community. I believe that it’s true that each person has strengths, weaknesses, and blind spots, so I value communal discernment in planning.”

One particular student is Renee Chan. Fourth-year and returner to the Chapel Band, Renee Chan brings joy, but also the mind of a dancer, explained Drost.

He continued by saying, “Renee is a dancer, she thinks of how to engage in worship with our bodies, which is more natural for her to think about. It has helped me in letting go of my control over choosing all the music. I also really want to invest in key leaders on the team who will be leading worship their whole lives. I want to multiply our impact on the church.”

Chan, one of the Music Directors, shared, “I’m wired to think creatively, so the Spirit gives me vision whenever I sit down to plan a week of chapel. It’s similar to when I choreograph a dance and every move I create has purpose and meaning behind it. Each song I choose comes prophetically from the Lord, and my hope is that Westmont would experience love, hope, and freedom when we set our eyes on Jesus and worship Him.”

Drost said, “The introduction of non-English songs has provoked joy for some, and discomfort for others.” But Drost hopes that this third goal of introducing new songs will help them to gain empathy and practice solidarity with the global church.

“The introduction of non-English songs has provoked joy for some, and discomfort for others.”

I think we need to think carefully and biblically about what worship is. Is it just about how I feel? Should it always make us comfortable? David insisted that he would not ‘offer to the LORD my God burnt offerings that cost me nothing’ (2 Sam 24:24). And we have to take seriously that in the scriptures, there is a close association between acceptable worship and wider issues of justice. The practice of multilingual worship has biblical foundations in places like Acts 2 and Revelation 7. It can shape us to be better disciples in the 21st century as it cultivates empathy and expands our perspectives. And we can rejoice when singing in other languages as a blessing to the members of our community who grew up speaking those languages,” explained Drost.

Kayla Abeyta, a fourth-year and Music Director, added, “Of course it’s uncomfortable when all we know is Western worship. However, when engaging with God and sitting with other people who speak different languages and have different experiences, it’s crucial that we cross that bridge with them because when we do, we experience a part of God’s heart that we are unfamiliar with, a part of God’s heart that needs to be seen.”

Abeyta is very intentional with how the music is chosen. “Sometimes music speaks more to people than the sermon does. It’s another form or extension of the sermon and a ministry of the word.”

She added that sometimes, “Worship doesn’t just have to be just us raising our hands in joy. It can be more honest in how we worship, whether it’s in sorrow, lament, or even anger.”

Intentionality and prayer is also used to choose of whom the next Chapel Band will consist. Drost said, “I really believe that everyone that is on the team is for a reason and that God brought this team together. It’s been my experience that the upperclassmen, especially the seniors, blaze the trail and then the next class steps up to the challenge.”

Both Abeyta and Chan are returners to the Chapel band, but third-year Matthew Metz, brings a fresh new perspective. Metz said, “Being on Chapel Band is a ton of encouragement, it’s a space that is not necessarily safe, but challenges us to step up in a new way. A space where I am encouraged and challenged at the same time to grow into the responsibility of being an instrumentalist.”

By continuing to challenge themselves and the student body to grow, the Chapel Band has become a staple to the Westmont campus.

And as this year chugs along, the Chapel Band will continue to cultivate a worship environment that will challenge the student population in their definition of what worship is and how we can grow alongside the Lord.