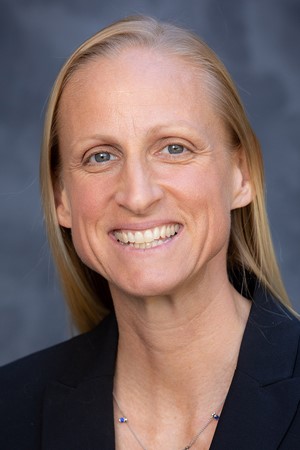 Women’s basketball head coach and associate athletic director, Kirsten Moore, grew up in the small town of Larkspur, California alongside three siblings. Her parents stressed the importance of work ethic and honesty, something that has greatly influenced her coaching style.

Moore had a very sport-oriented upbringing, seeing as her parents decided to raise her and her three siblings without access to television. Moore stated, “Looking back, I am super grateful that we didn’t have a television, because it developed a super healthy dynamic where we all really enjoy being together and we invested our time in things that have had a lasting impact.”

The first word Coach Moore ever spoke was “ball” and, ever since then, sports have played a crucial role in her life. From playing games with her older brother to playing sports at school, she was always doing something active.

Of all the sports, Moore said she “always had a different level of passion for basketball.” She continued, “I loved the opportunity to go work on the game by myself to improve, but that in order to be successful, it was a team game that required the best out of a group of people and not just myself individually.”

Her passion for the sport led her to play Division I basketball at the University of Oregon during her college years. Though she first joined the team as a walk-on, Moore earned a scholarship by the second half of her playing career. Every year she played for the Oregon Ducks, the team won the NCAA tournament. She also became team captain and earned Academic All-PAC-10 — now the PAC-12 — honors twice. Coach Moore claims that playing collegiate basketball was the most challenging thing she had done up to that point in her life, but “the ways it grew [her] were definitely worth it and [she] loved being a Duck.”

Her coaching career has taken her to many well-known universities here on the West Coast. After graduating from the University of Oregon in 1998, she was brought on to be an assistant coach for its women’s basketball team. She remained there for three years and had great success, winning two PAC-10 championships and making three trips to the NCAA tournament. She then continued her career in the PAC-10 as an assistant coach at the University of California, Berkeley, where she stayed for four years.

Although faith was not a focal point of her life until adulthood, Coach Moore expressed that “the opportunity to integrate faith and biblical principles into the culture of our team” was the leading factor that led her to working at Westmont College. She continued, “I never would have thought my entire career would be centered around basketball, but it is amazing how God took a passion that I had and merged that with talents in order to mentor and have a positive impact on young women’s lives.”

Overall, Moore has been a considerable asset to the athletic coaching staff at Westmont in creating a competitive and Christ-centered team. As she enters her 17th season at Westmont, the women’s basketball team looks forward to a competitive season and hopes to win another NAIA National Championship title under her guidance.