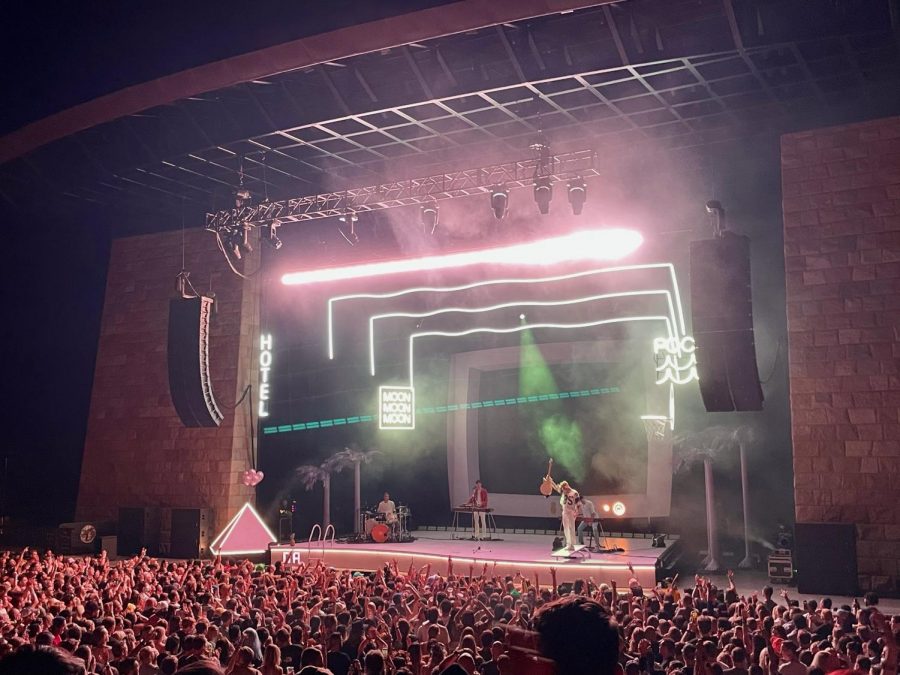 If you're not familiar with Glass Animals, or the term dream-pop for that matter, Kat Smith thinks you should be.

“Go make an album and call it Dreamland.”

The iconic final line of the titular song of Glass Animals’ latest album, “Dreamland,” was chanted loudly by the fans who filled the seats of the Santa Barbara Bowl last Thursday, Oct. 28. Hordes of attendees in colorful bedazzled jumpsuits flooded up the hill as smoky strobe lights flashed in the warm evening air, creating a fittingly dream-pop atmosphere.

The concert itself was a work of art. Home videos played during the band’s nostalgic tune “Youth.” Psychedelic pool logos and a diving board adorned the stage.

The setup was vibrant and the band brought the energy. Dave Bayley, Joe Seaward, Ed Irwin-Singer and Drew MacFarlane formed Glass Animals in Oxford in 2010. Since then, their notoriety exponentially increased and their tours in Europe and the United States consistently sold out.

When the Bowl released the concert date in July, tickets sold out in under five minutes. After a second night was added, tickets still sold for upwards of $150.

And Glass Animals delivered. Junior Siena Keck was one of numerous Westmont students in attendance that evening. Keck stated, “It was such an energetic and electric crowd, everyone was dancing and there was a really fun mix of different people.”

Junior Isabelle Hugoniot explained, “This was an amazing first concert back post-COVID. I had high expectations and I was still totally blown away.”

The British psychedelic rock band dazzled fans in Santa Barbara before continuing its “Dreamland” tour in San Francisco at “Outside Lands,” the city’s renowned music festival held in Golden Gate Park this past weekend.

Whether you’re a seasoned devotee or a newer addition to the Glass Animals fan club, take any chance to see the band live. You won’t be disappointed.