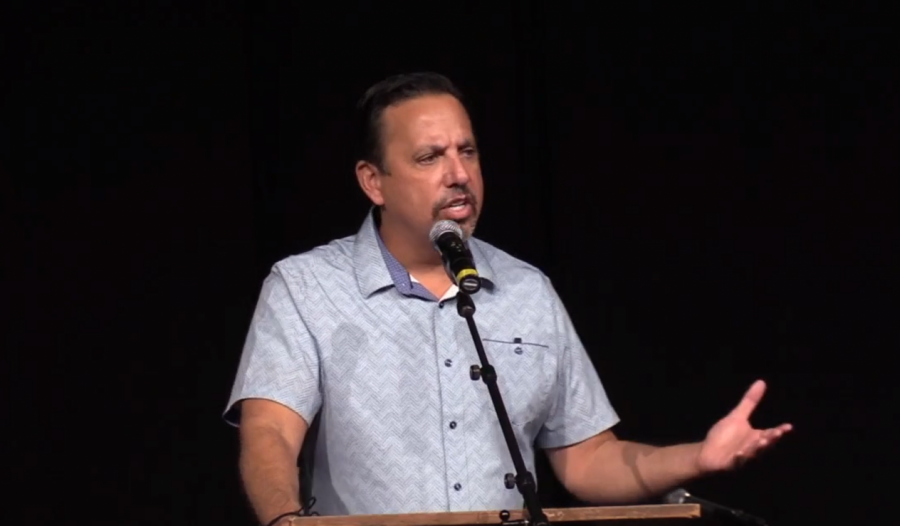 Three consecutive Wednesdays in October saw Westmont students watching a three-part series, “Brain, Heart, World: Discovering the Harmful Effects of Pornography,” in chapel. The series generated widespread discussions, not only on pornography, but on trauma, trigger warnings and chapel content in general.

When asked about his inspiration for showing the videos, Scott Lisea explained that in more than thirty years working with students, he has had “countless conversations” regarding pornography, noticing a “rapid increase” in the number of students struggling with it. He especially noted their “depression, discouragement and shame” resulting from that struggle.

Lisea called the documentary “an effective tool to resource students, particularly from a different angle.” Lisea explained how the series “doesn’t shame [or] start with, ‘Stop doing this. You’re bad! It’s bad!’ It starts with, ‘This is harmful to you, and it is harming real people. I bet you care about that.'”

Jake Hughes, who briefly shared part of his story in chapel following the showing of the second video, has been one of those “countless students” who discussed with Lisea his personal history of engaging with pornography.

“I was pretty excited that they were sharing this [documentary],” Hughes said. “I think that the topic of pornography and sex in general is not talked about a lot in the church or at Westmont.” He agreed with Lisea by adding, “I think they did a good job saying they’re not trying to shame anyone.”

Hans Khoe, a current senior and the vice president of Westmont College Student Association, agreed that “child sex trafficking … is such an important issue that not enough people know about,” though he admitted, “I’ve never thought about it being presented through chapel.”

For Hughes, watching the series encouraged and helped him. “It’s very comforting to hear about how the brain can change and heal itself,” he explained. “As someone in that process, that’s a comforting thing, for sure.” Another big takeaway came from hearing the many personal stories and “knowing that I’m not alone.”

Hughes said he hoped the chapel videos would ideally lead to new “groups for guys and girls focused on helping each other overcome pornography,” especially by being “a conversation-starter.” He has seen this latter hope come true since the beginning of the chapel series. “I’ve had lots of good conversations that have come out of it … shining light on such a dark issue.”

After seeing the videos, however, student body discussions went beyond the topic of pornography. In response to complaints from students, Lisea made a statement in chapel before the third video was shown, explaining that he had not given trigger warnings because “trauma gets its strength from being avoided.”

Drawing on both his experience and the opinions and research of experts, Lisea asserted, “at best, [trigger warnings are] not helpful and, at worst, they’re harmful because they’re reemphasizing…a narrative that’s not true about you.” This statement drew much more attention than the actual content shown, according to several students.

Khoe said he received negative feedback when talking with students. He observed, “Most want to talk more about mental health in chapel rather than topics that can be the root of their trauma.”

“I haven’t heard a single person talk about the actual videos that were discussed,” said sophomore Becky Huff. “All I’ve heard is about trigger warnings and trauma, and I think that says a lot.”

When asked about trigger warnings, Hughes acknowledged, “The stuff is super heavy … It’s really heavy to walk out and go to my class like it’s a normal day.” He noted, however, that he personally knows that Lisea “has the good of the entire campus in mind, and he doesn’t intend to trigger anybody.”

Huff disagreed with the statement that trigger warnings are harmful. “I really feel like [warnings] are important …There’s a lot of stuff in my life that happened a while ago…[but] still really affects me every day. So if I were to see a video about that topic, I would want a little heads up to just brace myself for what was about to follow.”

She explained, “Trauma shouldn’t be our entire identity … but people deal with trauma in different ways, so the mentality of, ‘you need to face it and get over it’—I think that’s just too broad.”

She added, “I agree that all of these topics should be talked about and dealt with, because they are going on every day … But I really think a little extra sensitivity would go a long way [in helping] the student body to actually hear the rest of the message.”

Katie Ticas, a sophomore Spiritual Formation Coordinator, disagreed with broaching these “big issues” at all in the weekly chapel setting. “I feel like chapel is not the place for them — it’s not the place to talk about a terrorism video or even pornography … [T]he elective chapels … could be a good option for [handling those topics].”

Ticas said she believed the broad range of chapel topics and extensive “diversity of thought” among chapel speakers has not been helpful in general. “Nothing really feels unified,” she said. She wants chapel to be mainly “a place where we can talk about Jesus and the Gospel…[and hear] more Biblically-based messages.”

She specifically critiqued one part of Pastor Lisea’s statement: “He said [he faced his trauma] when he was watching a movie with his wife in the comfort of his home, and that’s a really distinct thing from being forced to face your trauma in chapel on a Monday morning when you don’t know.”

Ticas pointed out that many students don’t have the opportunity to talk through their trauma during or after chapel, either because they have class or they don’t have a trusted person to confide in at that moment. “So, even if there’s lots of evidence that it’s good to face your trauma,” she concluded, “I think it’s really important to acknowledge the environment you’re going to face it in.”

Lisea acknowledged this difficulty students face. “Some dialogue with … students,” he said, “is helping me realize that we need to find some middle ground as [they] navigate their days after chapels that have had an intense effect upon them.”

He also observed that what hurts one student may help another. “We discuss hard things often,” he said, “including race, poverty, health issues, death, injustice and now unhealthy sexuality. Broaching these discussions will not go perfectly. We will all need to learn how to do so faithfully and carefully … [helping while] leaving room for people who are overwhelmed.”

Whether students like Hughes and Khoe appreciate chapel’s engagement with heavy topics or whether, like Huff and Ticas, they would change parts of this approach, students continue to dialogue with Lisea concerning his approach to both pornography and to chapel itself.

Speaking to his approach in chapel, Lisea emphasized, “Christ first in all things, including Him stepping into the hard parts of our stories and bringing life.”