With President Beebe saying White Jesus is here to stay, student activists are tired of protesting. 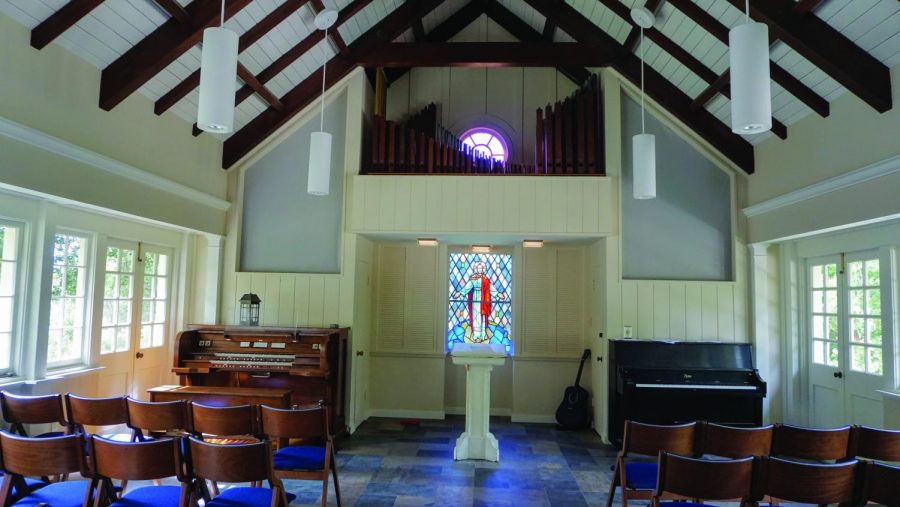 The stained glass window was orginially installed in 1961.

Early one morning, fourth-year Kayla Abeyta went to play the piano in the prayer chapel. Expecting, as she walked in, to see White Jesus, His arms outstretched and feet planted in North America, she was surprised to find that the chapel was brighter than usual. On that morning in late May, the stained glass window was not there, and the light poured in through the empty frame.

Abeyta snapped a photo and posted it with no caption. With students gone for break, she wondered if the college had taken the opportunity to quietly relocate the controversial image. “I had a mixture of surprise and relief that the student voice was finally being listened to,” she said. But the window would be back—a Westmont alum informed Abeyta that it was just being repaired.

Originally installed in 1961, the stained glass window has been the focal point of a year-long, campus-wide discussion of race and theology. But to the extent that the goal of last year’s conversation was to decide the fate of the window, the college now has an answer. President Gayle Beebe, asked directly about White Jesus during a Q-and-A session with student leaders just before the semester began, addressed the issue with an air of finality. “I’m glad that we fixed the window,” Beebe said. “I’m glad we put it back in.”

White Jesus was first questioned last year, when three students—Brendan Fong, Emily Mata and Olivia Stowell—sent a letter to the college’s administration asking that the window be removed and created an online petition to that effect. The topic resonated all year: some 200 people filled the Global Leadership Center to hear a panel of four professors discuss the image, five professors wrote opinion articles in The Horizon on the topic, and students began wearing shirts with red print, reading “Jesus wasn’t White.” The petition now bears 216 signatures.

The college’s administration didn’t address the issue publicly until the end of the year, but The Horizon reported that the student activists did meet privately with members of the administration. “We met with representatives of student life and shared some of our concerns,” Fong told the Horizon in March.

At the Q-and-A session, Beebe gave several reasons for his decision to keep the image. Referring to the window’s place in the Nancy Voskuyl Prayer Chapel, he said, “It’s a memorial chapel and so I wanted it kept whole.” But the president also discussed the racial dimension to the controversy. In the 1960s, Westmont “was easily over 90 percent White, and so I think it would probably fit the college at the time,” Beebe said. “[The image] would have come of age during a time where the college was predominantly white, and we just need to move beyond that.”

Beebe had already announced his solution to the controversy during the last chapel of last year, when he told an audience that starting in the fall, “we are going to be looking at a wider array of images of Christ.” Three weeks ago with the student leaders, he repeated this message. “In this coming year, I really hope that we add images of Christ on campus that are reflective of the diversity in our community and in our world,” he said. “I’d like to see us do that.”

But today, exactly 20 weeks after the plan was first announced, this process remains in its beginning stages. According to Vice President for Student Life Edee Schulze, the college is currently forming an “advisory group” which will begin creating a new Center for Diversity and Global Engagement. Referring to the president’s hope to add more images of Jesus, Schulze said, “Dr. Beebe and I have talked about it, and we are considering this with the overall plans for the Center.”

The fate of the window may be settled, but the questions behind it remain. The reasons the president raised for why he chose to keep the image leave the concerns of the student activists unaddressed. Fourth-year Emily Mata, one of the authors of the letter that started the conversation, is not impressed. “I just keep laughing because it’s so funny to me,” she told the Horizon. “It’s just like nobody was listening to us when we said anything about why we care that there is a White Jesus there.”

When it comes to Beebe’s comment that, because Westmont was mostly White in 1961, the window “fit the college” at the time it was installed, Mata believes little has changed. “It doesn’t just fit the college at the time; you could say that today,” she said. According to Mata, that era should be something the college would want to leave behind. “If you want to hold on to that part of your history, then sure, go ahead.”

Though the memory of Nancy Voskuyl has often been invoked to support keeping the window, students have long pointed out inconsistencies in the reasoning that casts White Jesus as part of the chapel, and the chapel as a memorial which shouldn’t be altered. “They changed the pews—we loved those pews!” Mata said, referring to past changes to the chapel. “The chapel has undergone renovations before. If the banisters were old, they would change the banisters.”

Ruth Mulligan, a Westmont alum and the oldest sister of Ms. Voskuyl, has been following the discussion of race at Westmont. “It’s an important conversation,” she told the Horizon, “one that we’re having all over our country—it’s very timely.” But she stressed that she and her sister Jane Jackson have had no interest in deciding the fate of the window either way. “We don’t want to interject ourselves into the conversation that Westmont is having, in terms of the decision that is made.”

The plan to keep White Jesus and add more images has not escaped criticism either. “It’s disappointing but not surprising,” said Mata. “The White Jesus—no matter how many other Jesuses you put in there—will still hold the central place, and he will still be the first Jesus that existed there.” Westmont’s website describes the chapel as “the only building on campus which clearly, in both form and function, indicates that we are a Christian college.”

Last year’s leaders are tired. Of the three students who led the efforts in protesting White Jesus, Stowell graduated, and the two who remain, Fong and Mata, are not planning further action. “It used up so much of my energy and my mental space,” Mata explained. “Me and Brendan [Fong] both have a personal and academic need to withdraw from investing so much into changing Westmont as an institution. We’re trying to take more time for ourselves.”

Many have found the conversation prompted by the objections to White Jesus to be helpful. Campus Pastor Scott Lisea, who was in his first year in the position, engaged from the beginning. In an interview, Lisea, who identifies as Latino, said, “Last year has started a really wonderful reawakening for me. I’ve had my own journey of appreciating the skin God put me in.”

At first, Lisea had been critical of the student activists, suggesting in an all-student email that they were “shortcutting good dialogue.” But he apologized for his remarks during chapel that week.

Lisea grew up economically disadvantaged and has worked extensively across cultural boundaries in an “interpersonal” manner, but last year he began thinking about larger forces surrounding diversity. “I didn’t have a framework for seeing the bigger picture,” he says. “I went after it, reading everything I could to be able to help shepherd the conversation at the school. There are large systems in play.”

Because of the participation of people like Lisea, Westmont has had a long conversation about race and diversity, but ultimately, the North American White Jesus that started the whole thing will continue to occupy the prayer chapel.

“They got what they wanted,” Mata admitted. “They got us to stop because they wore us down.”