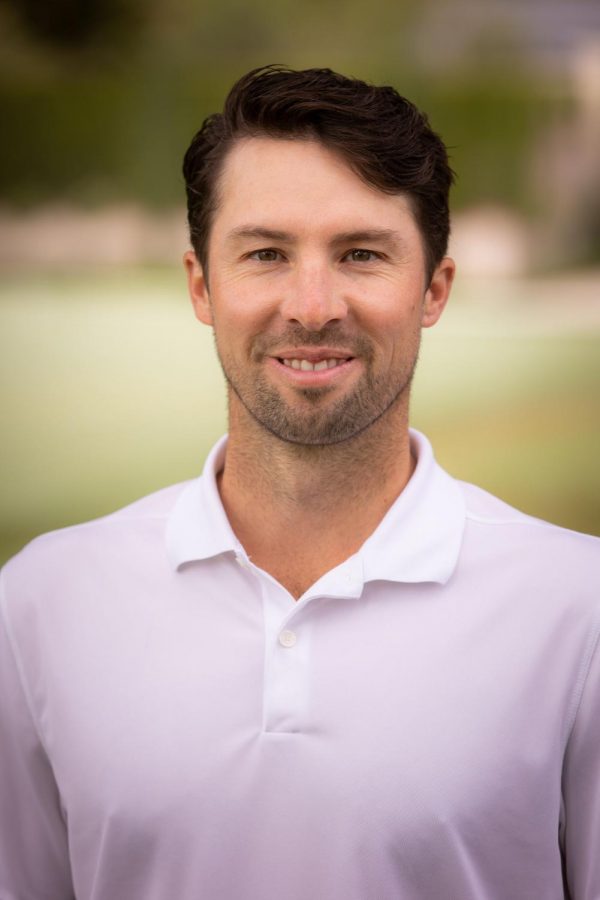 From playing collegiate football and soccer, to coaching multiple sports, to playing the role of a dead body in the show “Grey’s Anatomy,” Coach Joshua Ault brings a wealth of experience to his role as the coach of Westmont’s men’s and women’s golf teams. In explaining the various twists and turns in his life, Coach Ault emphasizes the importance of trusting God, taking leaps of faith, and daring to say “yes” when a door opens.

Coach Ault grew up outside Little Rock, Arkansas, with his parents and older brother. His childhood home sat on an acre of land off a country dirt road, just a bike ride away from his cousins. The rural atmosphere welcomed long bike rides, exploring and plenty of time in nature. Ault recalled, “It was an adventure every day.” This lifestyle also allowed plenty of time to invest in athletics.

Though he is now a golf coach, Ault played many sports throughout his childhood. The first was baseball, which he picked up around age five. In high school, he continued his involvement in multiple sports like soccer, tennis, football and golf. While he excelled at soccer and football, golf held a special place in his heart.

Ault’s first exposure to golf was the clubs and balls hanging on the wall in his grandfather’s house. He played golf throughout his childhood, something he attributes to his grandfather. “He’s the one who introduced me to the game … I became interested in the sport through him, totally just for fun.”

Ault remembers going to the golf course with his brother and three cousins for golf lessons with his grandfather. While these outings often included chaos and competition, they paved the way for Ault to enter a youth golf league before trying out for the high school golf team.

Although he loved golf, Coach Ault played football in college. After spending a year and a half as a walk-on kicker for the University of Arkansas, Ault felt compelled to leave the school. He felt that “God was moving [his] heart” to pursue a different interest.

So, at 19 years old, Ault quit the team, dropped out of school and moved to Hollywood to become an actor. During this time, he worked in commercials, films and even portrayed a dead body in ABC’s show “Grey’s Anatomy.” This transition into acting, which he describes as “a big leap of faith,” set him up for the next stage in his life: coaching.

While working towards economic stability through acting, Coach Ault began to coach soccer. This led to coaching jobs for various sports at the high school level, before he took a job as the men’s assistant soccer coach at Occidental College.

Ault continued to act and simultaneously pursue a career playing professional soccer. After a few years of coaching, Ault took a soccer scholarship to play for Providence Christian College as a 33-year-old. A chance golf lesson with the college president opened the door for Ault to start a golf program at Providence, which he did while finishing his degree and playing soccer.

While at Providence, he “was an athlete, student and coach at the same time.” After Providence, Ault took another leap of faith to leave Los Angeles and become the new golf coach at Westmont, a job he started in the spring of 2021.

Coach Ault compares golf to life by saying that, in both life and golf, “there’s a requirement for being consistent, but you have to take calculated chances.” He incorporates this idea into his coaching style and strives to support his athletes in faith, life and sport alike.

Coach Ault has been a great addition to the coaching staff here at Westmont, and we are excited to see where this season takes him and his players.