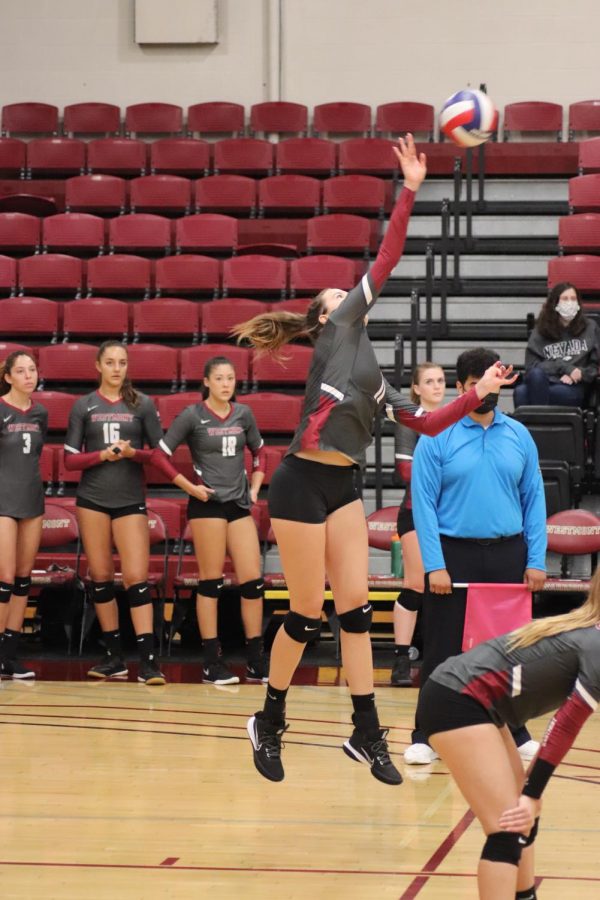 As their successful regular season comes to a close, the women’s volleyball team looks towards the NAIA Championship tournament with excitement and determination.

The team has competed in various tournaments and competitions since mid-August. While the team is “grateful [to] have made it this far,” second-year defensive specialist Lilian Reininga mentioned, “they are looking forward to continuing the season and aren’t ready to be done yet.”

“Our ultimate goal will be to make it to the final site in Sioux City, Iowa,” added third-year Lexi Malone.

The athletes are very excited to continue their success in the postseason. A positive and inviting team culture makes the team feel familial, something Reininga emphasized. “We all mesh very well and we all get along on and off the court. We have such a good time and are supportive of each other and will always be there for one another.”

Malone echoed this sentiment: “I feel so blessed to have teammates that are truly my best friends and it makes playing volleyball that much more fun with them.”

Qualifying for the championship tournament is no small feat. The Warriors feel full of pride and joy for achieving this accomplishment, but look to stay humble as the season continues. The Warriors are aware they have to work for their wins. This mindset allows them to not underestimate any team while still playing their hardest. When the players get nervous, Malone often reminds her teammates that “it’s just volleyball, [and] we’ve been playing it for years.”

Preparation for the coming tournament includes focus and determination. Malone emphasized the importance of “[getting] out of our heads and [performing] like I know we can.”

Since the start of the season, Reininga said that her teammates have had “confidence, envision [themselves] doing things well, and playing not for [themselves] but for each other.” These traits prepared them to be where they are today. Other phases of the preparation process include watching films of the competition and visualization practices.

While this is an exciting time for the Warriors, it also brings feelings of sadness and sentimentality as the end of the season nears. Regardless of the outcome, it will mean saying goodbye to five seniors who are graduating this year. Reininga commented that this reality causes the team to “value each game [and appreciate] the time [they] get to spend together.”

The opening round of the tournament will take place this Saturday, Nov. 20, at Oregon Tech University in Klamath Falls, Oregon.