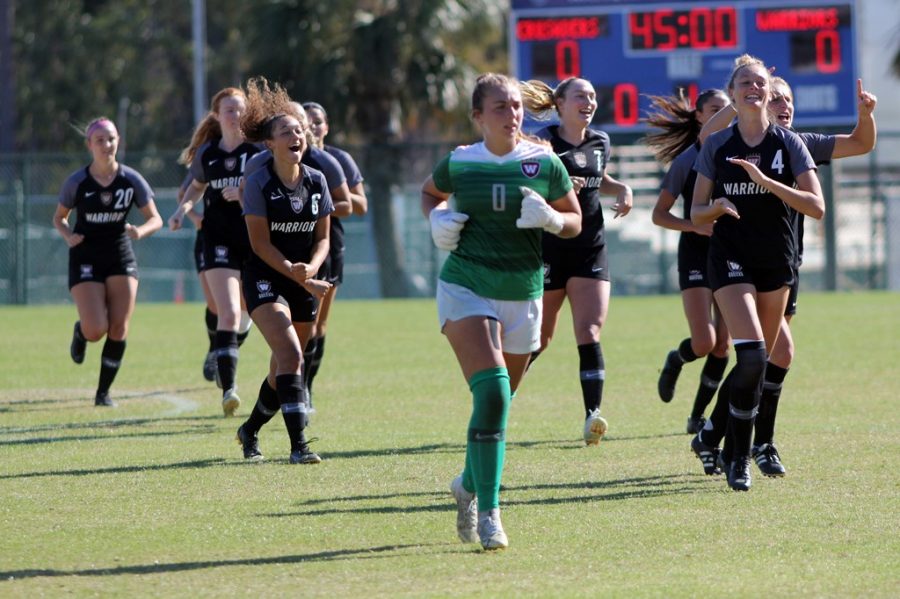 Going into the 2021 season, the women’s soccer team had one thing on their minds: winning. So far, this has been their story.

The women finished their regular season 6-2, with a .875 win percentage. In addition to this winning season came a Golden State Athletic Conference (GSAC) Tournament run that resulted in the championship title.

Third-year forward Grace Duckens shared the team’s reaction when they won the GSAC Championship Tournament: “We were a perfect mixture of proud and humbled. We knew that we still had a lot more work to do, but we also knew we had put in so much work to get to where we were. We deserved the success we got this season, but we weren’t satisfied yet.”

Due to this achievement, the women flew to Orange Beach, Alabama, to compete in the National Association of Intercollegiate Athletics (NAIA) Championship Tournament. The Westmont women’s soccer program has won the NAIA Championship Tournament four times in school history and hopes to win a fifth title this season.

When asked about the goal for the NAIA Championship Tournament, third-year defender Sadie Hill shared her personal objectives as well as those of the team: “We never want to have any regrets.” She explained, “At the end of the day, we can’t fully control the outcome of a game, but we can control our work rate and grit, and if both of those are high, you can never walk off the field disappointed. This has been our goal every practice and every game and has really driven us to a lot of success this season.”

Duckens also shared that one of the main goals throughout the tournament has been unity. “We knew that we were fitter than our opponents, we knew we had the talent, but we also knew that that would get us nowhere if we weren’t connected and working as one unit.” She continued, “When you see this team play, you see that we’ve accomplished this goal; no matter the strength or prestige of our opponent we go into every game together as one body. I think that’s why we’ve had so much success this year.”

The women have pushed hard this year to make it far in the NAIA tournament. With one win already in the books, the players are excited for their next opponent. A major contributor to their accomplishments is their off-field motivation. Duckens mentioned that her personal motivators are her coaches and fellow teammates. She said, “[The coaching staff and players] know that I’ve grown so much as a player and a person over the last three seasons, and I wanted to prove to them that I was committed to this team and to succeeding this season. I wanted to leave this season with no doubt in anyone’s mind that I came to play this year.”

Hill also mentioned a special and unique aspect that keeps the team moving. “One of our coaches, Lauren Dorr [Matthias], is about to have her baby boy, which has been a huge motivation for us. She has pushed us so hard this year and has been a role model that has energized us every day!”

The women competed against William Carrey University in the tournament quarterfinals on Dec. 2. Unfortunately, the team lost 3-1. The Warriors had an amazing season and the Westmont student body is excited to see how the next season goes!