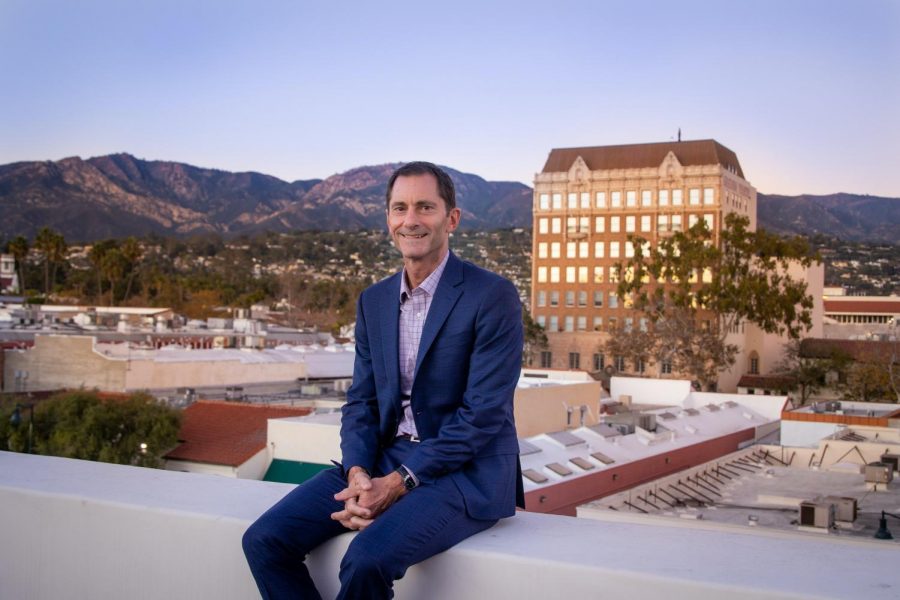 Rick Ostrander on one of Westmont's downtown buildings

Dr. Rick Ostrander — director of the Westmont Downtown program and assistant to the president for global education, innovation and new program development — offered the Horizon an exclusive interview regarding a topic some students and community members may not know much about: Westmont Downtown and Westmont’s off-campus programs.

Rick Ostrander (RO): There are two programs that are part of Westmont Downtown. We’ve been operating a semester-long program in social entrepreneurship for the past five or six years. It’s a program open to all majors, but it has an extensive internship component to it. Half of the credits are an internship that fits within the student’s major, whether it’s business, social work, entrepreneurship, etc. Whatever a student’s major is, we can find an internship for them.

Then there’s a course seminar where students learn about social entrepreneurship and how to apply their liberal arts education; I like to think of it as applied liberal arts. The guiding question is: “How do we take what we’ve learned on the main campus and make a difference in the real world with that knowledge and the skills that we’re learning?” We try to help students find ways to actively engage the Santa Barbara community.

This past year we’ve started the nursing program, ABSN, that’s basically a 16-month accelerated program for students that already have a bachelor’s degree and want to go into nursing. That starts in January.

RO: I think it does in two ways.

Social entrepreneurship is part of the traditional Westmont student’s academic program. Students who do that are still completing their degree[s] in one of the majors on campus, just doing that with a semester downtown. The liberal arts have always historically included engagement in the world, not just theoretical learning but including students who can engage and live well and be leaders in their community. The semester program emphasizes those parts of the liberal arts education.

Nursing is a little bit different because it’s attracting and recruiting students who have already completed their bachelor’s degree[s]. In that case, there was specific attention to figuring out how we’re going to devise a nursing program that includes a liberal arts element to it, which means thinking holistically and interdisciplinarily about one’s field.

What characterizes the liberal arts isn’t one field of study but an emphasis on a broad course of study that brings different disciplines to bear on the topic and also an emphasis on deeper intellectual skills, such as learning and creativity. So, the nursing program was developed with this specific question in mind: “What will be different about a Westmont nursing degree than a UCLA or another school’s nursing degree?” The difference is that we are integrating a liberal education into nursing.

CW: What does Westmont’s future look like in terms of further off-campus development? Is there a vision for expansion or changes to the semester-long downtown program?

RO: We’d love to see Westmont Downtown grow. I’ve been asking many departments about how the downtown program could be more relevant to their students. In the future, we want to think about ways to expand the program to incorporate a greater variety of majors and students. With off-campus programs, in general, we would love to see them expand, but they are what I call “downstream” of the main campus. There is a cap on on-campus enrollment, so what we would like to see is to grow enrollment to the point where we are overflowing the main campus. It’s in the college’s and students’ best interests to have students do a semester in Cairo or England or Singapore, so we would like to see those programs grow, but as an outgrowth of the on-campus enrollment.

Long story short, we’d love to see global education grow, but it has to be done in such a way that is financially prudent and contributes to the overall health of the on-campus programs. If we have open beds here on campus, then it’s not in our best interest to send students abroad, but if we are at capacity here and we have more students coming to Westmont than we can incorporate, then off-campus programs become an asset to the college because it allows us to be bigger than we really are on campus. And study abroad trips are great experiences for students. I personally think every student should do a semester off campus.

Also, there are two buildings downtown, one of which is furnished for social entrepreneurship and the nursing program and the other, which is an empty building. The other part of the downtown expansion is having a new 18,000-square-foot building that’s waiting to be utilized in new ways. Figuring that out is one of the fun parts of my job.

CW: Do you think the development of programs which are not the typical on-campus programs will be an enticement for students to come to Westmont? Is that part of the goal of developing programs like that?

RO: Yes, I think having the opportunity to have a fast-track nursing program can attract traditional-age students to Westmont to come as pre-health or pre-nursing and then move from here to the downtown program. We are also open to developing new programs specifically for downtown that can reach new groups of students. These could tap into new sources of students, whether it’s occupational therapy, physical therapy, other professional or health-related programs. Since we have the partnership with Cottage [Hospital] due to nursing, that could definitely be extended into other areas as well.

There are multiple benefits to off-campus programs, whether it’s new programs that reach new audiences or providing other educational opportunities. Ultimately, it frees up more spaces for more students to come here to receive a liberal arts education. You have to think of campus programs both as a beneficiary for a campus at- or over-capacity and an incentive to bring students to Westmont by providing opportunities that will be reaching a different type of student than would be coming here in the first place.