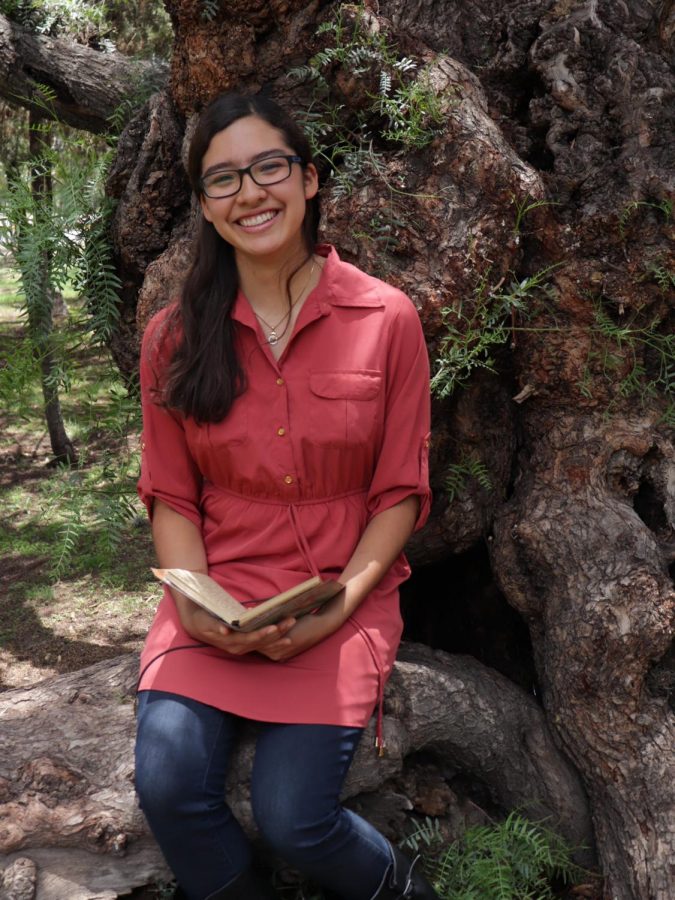 As the middle child of a missionary family of seven in Mexico, second-year Kelly Vivanco grew up trying to fit in with her environment. From her childhood in the church her dad pastored in Mexico to attending Westmont College in southern California, where her mom is from, Vivanco’s careful observation, quiet presence and competence have helped her adapt to new situations, bridge differences and overcome challenges.

Growing up, Vivanco explained, “We were always aware that we were different in multiple ways.” Not only were they Mexican-American, but they were homeschooled pastor’s kids. Vivanco described how she and her siblings responded to these differences: “We didn’t really try to make a big deal about it — in fact, one of my main goals … was fitting in and not standing out.” She paid careful attention to little things Mexican children did differently and made adjustments to her own behavior accordingly.

One example was learning “just from hearing and watching that Mexicans always wore shoes around the house or wherever … it’s a very big deal that you need to always wear shoes,” whereas her mother had grown up “running barefoot through flower fields.” Eventually, Vivanco wore shoes all the time, even when it set her apart from her siblings.

In addition to differences in habit and lifestyle, Vivanco encountered differences in language. In contrast to those around her who primarily spoke Spanish, she was especially competent and comfortable in English, the language her mother spoke to her. She explained, “English was literally my mother tongue.”

Additionally, Vivanco noted that “homeschooling was a very foreign concept back then in Mexico, so I would get a lot of questions about what that was like.”

Vivanco explained that being homeschooled “preschool through high school … was definitely a big part of my development as a person … Our homeschool program was literature-based, so it was a lot of reading … we read a lot of historical fiction.” She and her siblings “would always carry books around and read them.” After noticing that “no other kids would do that … eventually I kind of stopped doing that to fit in.”

Vivanco faced a dilemma: “It feels nice to embrace this identity of being so different, of being an English speaker, and a homeschooler, and the pastor’s daughter, and at the same time, I just want to sit here and have no one notice me. It was always this tension of ‘What is it I really want to embrace?’”

Vivanco’s family ran the church together, leading worship or volunteering in Sunday school. Vivanco said, “Since my dad was a pastor, we were involved in the church a lot, ever since I was little.”

At 14, Vivanco started teaching Sunday school. She had always loved being with kids and gotten along well with them, so she was asked to lead a class. After one session shadowing the children’s ministry leader, Vivanco found herself on her own. She noted, “I had a very hard time adjusting … I didn’t know classroom management skills; I didn’t have very much training.”

It was a hard start, but God worked in her heart and she developed a deep love for the children, learning to work with them patiently. As Vivanco spent more time with them, many children would complain to her about their terrible education. As someone who had grown up reading and loving books, Vivanco was pained to hear that the children she worked with hated reading because of their limited access to books. The children also told her about the teachers who gave up on them in school, simply providing the answers instead of teaching the material.

Her love for the children ignited a passion for their education, and she began to feel that teaching was her calling. She believes teaching is the biggest way to impact society. Her heart for education led her to pursue that in college. She had always assumed she would end up at Biola, where her two older siblings attended school.

She was surprised, then, when God ended up providing through Westmont. After a week of intense research, God gave her peace and she committed there.

She knew COVID-19 was going to make the college process difficult, but she was determined to make the best of it, no matter what. She described herself as having a “warrior mindset.” Explaining her perspective, she said, “God is sending me here, and He has good plans, so no matter what happens, no matter what I face, I’m going to work with what I have, and it’s going to be good.” Two days before she was supposed to fly into the U.S., Dr. Beebe announced that the college would not open for in-person learning for another month.

After careful consideration, Vivanco resolved to take a leap of faith. She flew in anyway and immediately came down with COVID-19.

Once students repopulated the campus, Vivanco encountered new challenges. Adjusting to Westmont was very difficult because of the new social norms: no hugging, no handshakes and no close contact.

The distance in everything made her feel isolated. Her church and her family back home were very physically affectionate, and to lose that without much opportunity to regain it in a new community because of COVID-19 was very hard. She noted, “A lot of nights, I would be alone in my dorm room, and there would be just this feeling of pain and I started asking God, ‘When is this going to go away? … What can I do to claw this thing out of me? Because it hurts too much.’”

In spite of the isolating nature of COVID-19, she chose to be content in her first year. She emphasized, “I also tried to be grateful for everything that was going on: my classes blew me away, all my dreams were coming true, life was so good and so rich, and why am I still hurting this badly?”

Westmont helped her pursue her three loves: acting, writing and music. She could explore her passion for music through choral union and college choir. She joined the poetry club and found people who loved the same things she did. She was in a film by Mitchell Thomas, “A Winter’s Tale (Interrupted)” — the kind of thing she had dreamed of participating in as a child. As a liberal studies major, she has been able to equip herself for elementary education. The classes keep her love of children alive, even though she is far away from the ones she taught. Her classes give her a lot of joy, as she looks forward to her future career teaching 2nd-4th grade.

However, she describes this semester as one of the happiest in her life. She noted that when she came back for sophomore year, “the very first day here, there were just so many people, and we could have our masks off outside, and just being in the sunshine and eating with people — it was just so beautiful.”

The lessened COVID-19 restrictions facilitated deeper relationship-building without the fear of breaking the rules. She expressed deep gratitude for “having the freedom that we had and being treated like human beings again … instead of being treated like prisoners threatened with quarantine all the time.”

When asked what she wants to give back to Westmont, she said, “I have been trying to invest in people … I’ve tried to be a good listener to people, and to be a friend … someone that other people can rely on.” Beyond interactions with individuals, Vivanco continues to create spaces for people to feel heard as a frequent guest writer for the Horizon, a member of the Republican Club board, and a Spiritual Formation Coordinator at Westmont.