Let us love as Jesus did

LGBTQIA+ and the church. 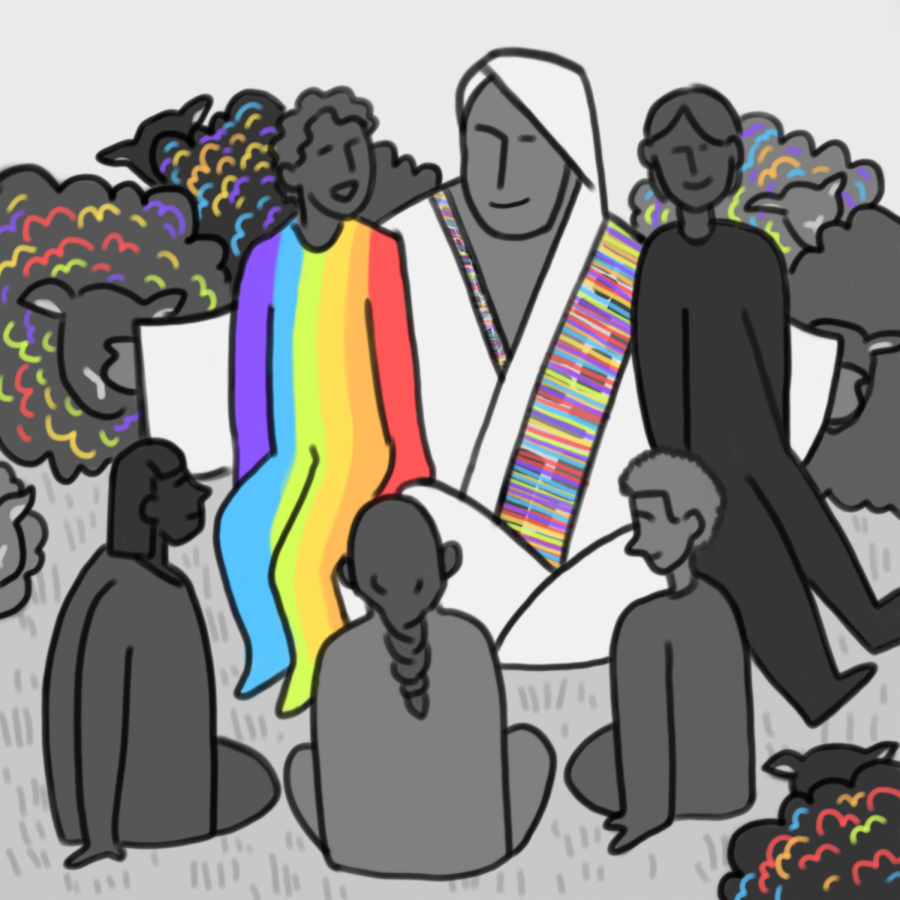 In the presence of the Savior.

The most quoted verse in the Bible is John 3:16: “For God so loved the world that he gave his one and only Son, that whoever believes in him shall not perish but have eternal life.” However, if we continue to the next verse, we see, “For God did not send his Son into the world to condemn the world, but to save the world through him.” The only being with any right to judge did not come to earth to judge us, but to love us. How crazy is that?

Jesus embodied unconditional love, but we, as the church, have added stipulations to our “love,” making it conditional and circumstantial, at best, and downright deadly, at worst. We think we are righteous enough to judge people on the basis of many things, but particularly for their sexual orientations.

I had the chance to chat with a dear friend of mine, who asked to remain anonymous for this piece. She called herself a “walking oxymoron” as she is a Christian who identifies as bisexual, two identity markers she was taught couldn’t coexist. For her, they do. She told me that she just always knew she was queer, as cliché as that may sound. Even though she affirmed those around her who identified as Lesbian, Gay, Bisexual, Transgender, Queer, Intersex, Asexual+ (LGBTQIA+), the moment she came out to herself, she immediately felt self-hatred and disgust.

She named this “internalized homophobia” and has battled narratives of self-loathing ever since, directing negative thoughts at herself she could never imagine pointing at someone else. She shared a bit of her inner dialogue at the time: “Fix yourself, this is just a phase,” and constantly and consistently prayed that God would just make her straight. If one’s sexuality was a choice, her life would have been so much easier and she would be way less depressed. Confronting this part of herself has truly taken a huge toll on her mental health.

The statistics regarding the oft-dismal state of mental health of members of the LGBTQIA+ community are a testament that one’s orientation — or even gender identity — is not a choice. Studies show that those who identify as gay or bisexual are four to five times more likely to attempt suicide, and roughly one-third of gay youth have attempted suicide. Because of the narratives of shame, contempt and disgust directed at this community, many think it would be better to just give up on life. They do not think they can find the support and love they need and deserve here on earth.

This reality should scare us. My friend shared that many of the aforementioned queer folk would “point to the church as a real contributor to our self-hatred,” and she knows she is not alone in her battle to find the will to live. She wondered aloud: “How do we preach a gospel filled with so much hate?” There is such a lack of care for the people God made, each in their particularity. We need a life-affirming theology, not one that shames people into contemplating suicide.

She shared that so many people walked out on her once she told them she was queer, which has been invalidating and downright painful. Even so, she is “so grateful for the people who have stayed.” If people did not stay, there would be no reason for her to stay, and “it’d be way easier to quit on life.”

Her faith has always been a grounding force, and today that truth remains constant, in spite of it all. Despite the hate the church often directs towards those in the queer community, there is something about the love and hope and grace of Jesus that keeps drawing her in.

The church’s widespread stance on this issue breaks my friend’s heart. The church should have no place for hatred. We have heard the adage “hate the sin, love the sinner,” but this phrase is so incredibly problematic as it is still grounded in hate. It erases the whole lived experience of an individual, denying the validity of their story.

As she shared, “Our sexuality does define us, at least in part, even if we don’t want it to.” We are called to love people for their experiences and for every single part of who they are, not just for the elements tied neatly with a bow. She wishes the church “could approach us [the LGBTQIA+ community] with more love. We already get so much hatred from ourselves, we don’t need the church, who is supposed to preach love, to be hating on us even more.”

Simply engaging in open and intentional conversations about such a “taboo topic” would provide so much support. The silence around this topic “hurts more than it helps” and conveys that it is not even worth talking about. The church collectively has not engaged enough with the passages in the Bible that condemn homosexuality, and I asked my friend about her thoughts on the biblical argument that is often brutally and violently wielded against her.

In tandem, we asserted, albeit in our college-level exegesis, that those passages refer to acts grounded in rape, pedophilia or — more broadly — lust, and that the Bible really has nothing to say about committed and loving homosexual relations.

Rachel Held Evans, in her book “Inspired,” writes that in the first century, “same-sex relationships were not thought to be expressions of sexual orientations, but rather products of excessive sexual desire,” out of “an excess lust that could not be satisfied.” Evans also highlights the Jewish tradition of “midrash,” which invites readers of the Bible to explore and wrestle with the text. Scripture is not the ending point, but the launch pad for conversations, doubts, questions and creative interpretations.

This clarification is just one example of affirming theology, and Justin Lee, in his book “Torn,” explores the Biblical mandate for love that my friend and I find so important. The Apostle Paul, who also penned Romans, one of the letters containing condemnations of homosexuality, wrote in Romans 13:10, “Love does no harm to a neighbor. Therefore love is the fulfillment of the law.” Lee thus voiced, “If love is the fulfillment of the law, shouldn’t that take precedence over everything else?” Shouldn’t the spirit of the law be more convicting than the letter of the law?

Always wont to bring it all back to God, my friend mentioned she often thinks about what Jesus would do if she sat across the table from him. She is the one who pointed out John 3:17 to me, and she knows for certain that Jesus would sit down and break bread with her, without condemning her. That posture of unconditional love and acceptance is what we are called to pursue. For her, true Christianity “always opts for love over hatred, every single day” and should not be a nebulous cloud of darkness and disdain “but a beacon of light and hope.”