Westmont’s Formal Gardens: The jewel of a campus crown 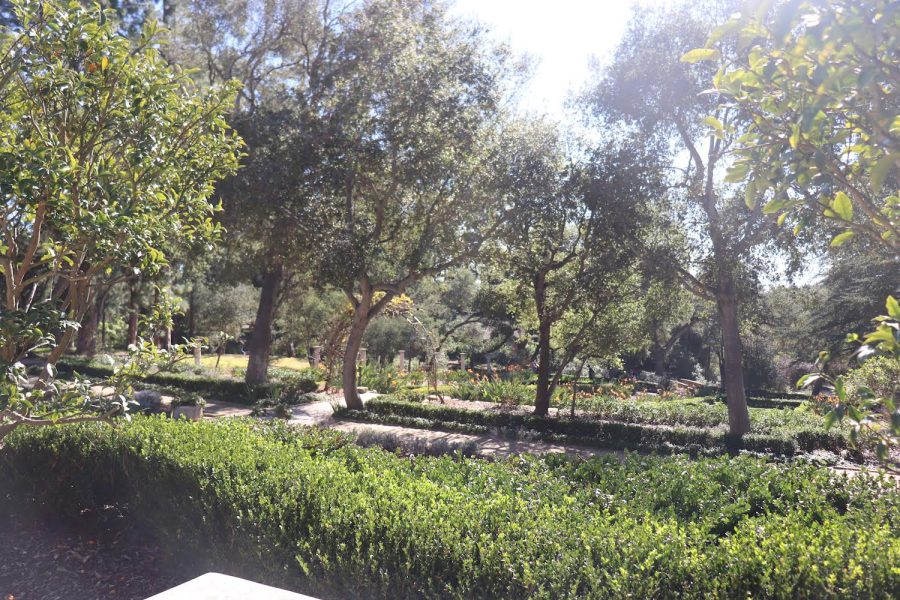 The Formal Gardens are a centerpiece of Westmont’s campus, drawing in students as well as families visiting campus on the weekends. Beyond merely passing through on their way to class, students rely on the gardens as a place of peace and privacy throughout the day.

“I like to go sit there when I’m going somewhere and I’m early,” second-year Katie Sherwood explained, “or I don’t have time to go back to my room. I’ll just sit there for a bit … before I continue on.” Sherwood also said she likes to go there when her other favorite study spots are filled. “I also love to be there because the crows love to talk in those trees. It’s peaceful, but there’s stuff happening at the same time.”

Second-year Abby DeWitt was found in the Formal Gardens because public safety was fixing the light in her room, which she took as an opportunity to “sit outside and relax.” After adding that she spends time in the gardens every once in a while, DeWitt highlighted the greenery surrounding the benches. “It’s a little more private,” she said, “compared with other benches.”

Randy Jones, director of campus planning, has worked at Westmont for 27 years and appreciates how “quiet and peaceful” the gardens are. “I love to walk this [center path],” he said.

Jones said features such as the bridges, stone columns, grass panels, hedges and birds-of-paradise flowers are all “part of the original estate, [though] the trees were smaller.”

According to Diane Ziliotto, the archivist at Voskuyl Library, the original estate gardens were designed prior to 1905.

“The land, at one time, used to belong to a man by the name of Ralph Stevens,” she explained. Stevens was a well-known local landscape architect who grew plants on the property. “He would then box up his plants and get them out to local yards [and] gardens.”

Stevens and Mrs. Jennie Murphy, who later bought the estate with her husband Peter Murphy in the early 1900s, designed the gardens, Ziliotto stated. “So, Mrs. Murphy was very, very involved in the plantings of this campus [when] the first house was built, [and] she remained involved in the landscaping of the house the entire time that she lived here.”

After her husband’s death, Mrs. Murphy tore down a house — which, according to Jones, was named Greystone Terrace — and built another in its place during the 1920s. The gardens remained. As documented in Westmont Magazine 1940s articles, Westmont College founder Mrs. Ruth Kerr and other leaders felt God miraculously lead them to buy the estate in August of 1945.

Though other parts of the campus were developed and further established, by the late 1990s, the Formal Gardens were in serious disrepair, according to Jones. “When I came, this was all ‘jungle-ly,’” he said. “You could hardly see through [the Formal Gardens].”

In the late 1990s, nearly a century after Stevens and Mrs. Murphy designed the gardens, a widow named Louise Lowry Davis, a local philanthropist, donated money to have them restored. Neither Jones nor Ziliotto were certain of Mrs. Davis’ connection to the college. Still, they suggested she was perhaps acquainted with Dr. Winter, the college president at the time, or Dr. Edward Birch, the executive vice president.

“I don’t know what the real connection with Westmont was,” said Jones, “but [Mrs. Davis] loved gardens … She [also] liked to promote friendship, and she thought that the garden would be a good place to [do that] — a place where people can meet and be together.”

Ziliotto noted that Mrs. Davis was also a driving force behind the Santa Barbara dolphin fountain at Stearns Wharf.

With the grant from Mrs. Davis, Jones and others began the restoration process. “We brought tractors in and tore everything up on [the two top levels],” he said. Jones worked with his mentor, Carl Johnson, as well as Susan Van Atta, both landscape architects.

On the upper terrace, they added the now-classic kumquat trees alongside gardenias. “This was considered a fragrance terrace,” Jones explained, “because fragrance is a real memory-maker, and so people would smell this or the gardenia smell, and they would remember Westmont.” Though the original gardenias were removed after struggling to survive in the shade of the growing kumquat trees, lavenders have replaced them to contribute a special fragrance.

For the second level — its symmetrical patterns making it what’s called a parterre garden — Jones said they replaced the brick with stone, “to match all the other stone [on the steps of Kerrwood].” They replanted trees, hedges and lavender — keeping the symmetrical patterns of winding paths and plants — and added the water fountain.

“We like to think of [the gardens] as a place where people can sit,” Jones said. “That’s why we [added] the benches down below.”

Jones also said, “We added the [wisteria] arches, which are copied from the ones that are at the chapel … so people can walk through the wisteria, because this is an important ceremonial walk for the college.”

Jones noted that all the major features of campus, such as Kerrwood Hall, Voskuyl Library, academic buildings, Murchison Gym and the Dining Commons “are in a big loop on campus,” with the Formal Gardens at the center.

On November 13, 2008, just before the Adams Center was built, the Tea Fire swept through campus, burning the hedges of the Formal Gardens as well as several other buildings on campus. The fire is vividly remembered by Ziliotto and the staff, faculty and students on campus at the time.

Now, 20 years after the restoration, Jones explained that a small group of Westmont staff members who previously cared for the gardens handed the job over to Cold Springs Landscaping last May. “They have a lot of guys,” Jones said, “and you see them around, usually in red shirts. They did the remodel 20 years back, and they’ve done most of the major landscape projects on campus.”

The now-restored-and-maintained gardens mark the center of campus and set Westmont apart from other colleges. In Jones’ words, “It’s really nice having the center of campus [be] a place you can get away — you’re not looking at big buildings or anything — a place to relax, meditate, contemplate. It’s just a place of pure beauty.”