How to overcome the male gaze

On and off the big screen. 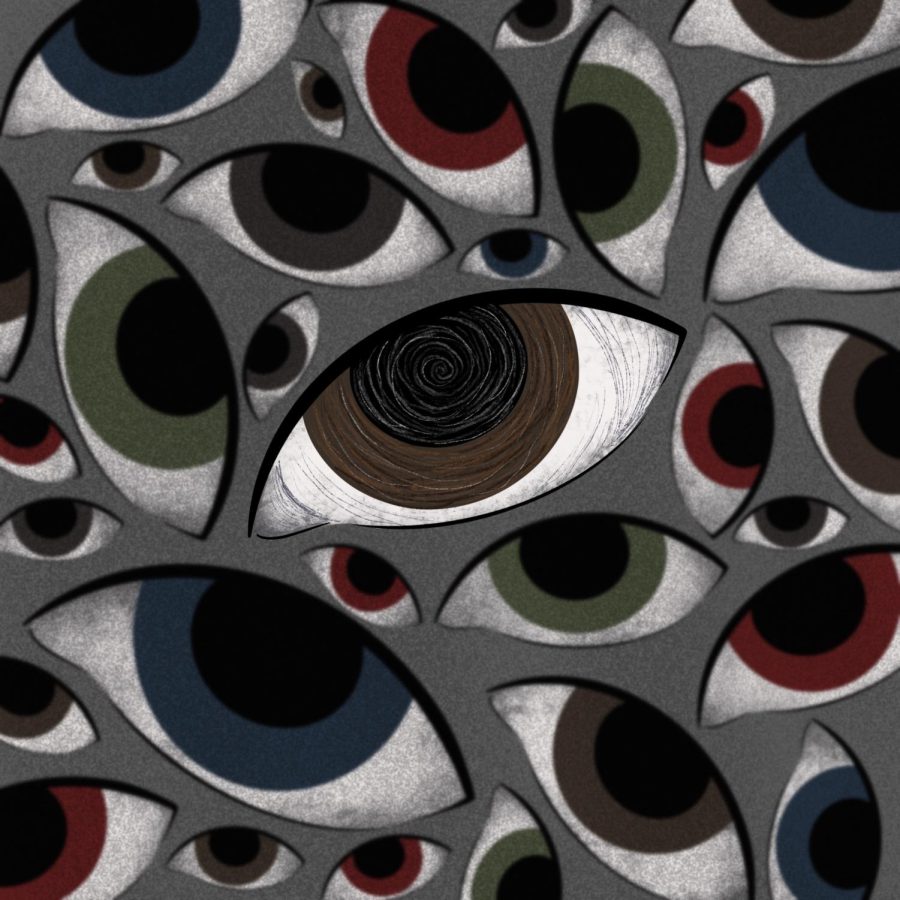 All eyes on you.

The term “male gaze” has been a buzzword on my social media for the past few months. This buzzword has sparked important and fruitful conversation surrounding misogyny and how media affect women’s self-image. I first heard about the “male gaze” on TikTok. The concept intrigued me and I related to it, but I didn’t fully understand the meaning of it and TikTok isn’t the most reliable source.

After conducting some research, I discovered Laura Mulvey, the film theorist who first coined the term “male gaze” in her 1975 essay, “Visual Pleasure, and Narrative Cinema.” The term “male gaze” describes the sexual objectification of women represented in film to please the male audience.

This theory is based on the idea that a woman’s presence on screen has the potential to create an unpleasant experience for the male dominant audience. This discomfort results in the hypersexualization of the woman because of the male’s desire for pleasure. This concept of the “male gaze” is further formed by the Freudian psychoanalytic concept of “castration anxiety”: a literal or figurative fear of emasculation.

While the concept of the “male gaze” is a film theory, it also reflects the male-dominant power dynamics in Western society. The “male gaze” film theory breaks down and analyzes the ways in which cinema caters to misogyny, which is a reality for many women.

The misogynistic contempt and phobia of westernized feminine traits gives way to the hypersexualization of women. Specifically feminine traits that directly contrast with the Western view of masculinity the emphasizes strength, power, anger, etc. It is rare for women to be considered useful in films that cater to a male audience unless they are hypersexualized. When women are not objectified as something merely to be looked at and conquered, the film becomes less pleasurable to a male-dominant audience. Essentially, “male gaze” cinema is serving a male gaze.

The “male gaze” has dangerous implications for women. In a society where disdain for femininity is so strong, a woman’s worth is often determined by how sexually desirable she appears to men. This objectification of women creates a myriad of problems that perpetuate the unbalanced power dynamic between men and women. From a young age, women are taught through media that our only asset is our degree of attractiveness in the eyes of men.

It may seem obvious, but women are multi-faceted beings with plenty of attributes to bring to the table. Reducing a woman’s worth to her desirability to men deteriorates her emotional, intellectual and physical self-esteem, while elevating toxic masculinity as well as the men who live up to those masculine standards. This dynamic creates a power imbalance.

The “male gaze” manifests in media and real-life in two ways. The more obvious way is the sexualized woman. She wears tight and revealing clothing and she carries herself in a sensual manner. There is less emphasis on who she is as a person and more emphasis on what she is physically and sexually.

Another way that the “male gaze” manifests is through the masculine woman. Because feminine traits are so detested in a male dominated context, a masculine woman might be more enjoyable to the male audience, but only if she reflects western masculinity. She has more depth in her personality than the sexualized woman within certain parameters, but she may still be sexualized physically.

When women are constantly objectified and misrepresented through media, we begin to internalize this rhetoric that devalues us. For many women, the “male gaze” does not just begin and end on the movie screen. The “male gaze” informs the way we view ourselves and others. We start to give in to the distorted concept that we must constantly cater to men’s sexual desire. This twisted venture for male validation is unrealistic because no woman could or should have to constantly be worried about how sexually desirable she is to men. Therefore, we can never live up to these shallow standards of womanhood.

Women can be intelligent, arrogant, powerful, wealthy, angry. Women can be good or bad people. These ethics are not determined by how feminine, masculine or sexual she is. That is how multi-faceted women are. God made us into very complex creatures who are capable of a wide range of diverse emotions, assets and personalities.

Therefore, the real way to overcome the “male gaze” is to view ourselves through God’s gaze: the gaze of a Creator who loves and desires His creation — flaws and all. We must take steps to view ourselves as carefully crafted by a divine and omniscient God. He knew who we would be, how we would act, and what we would do before He even began his masterful handiwork.

It’s time to internalize that our identity comes from God. We are not the women that western society wants to claim. We are not defined by the “male gaze.” We are not hypersexual, feminine or masculine beings. We are God’s children, and the misogynistic social constructs that infect society do not define us.

This debate about what and who we are supposed to be is not biblical. In fact, our Creator makes those decisions. “So God created mankind in his own image, in the image of God he created them; male and female he created them.” (Gen. 1:27).

Ultimately, no matter who we are, how we were made or how we express our identities, it will always be good enough, because as Psalm 1:27 says, “I am fearfully and wonderfully made. Wonderful are your works; my soul knows it very well.”