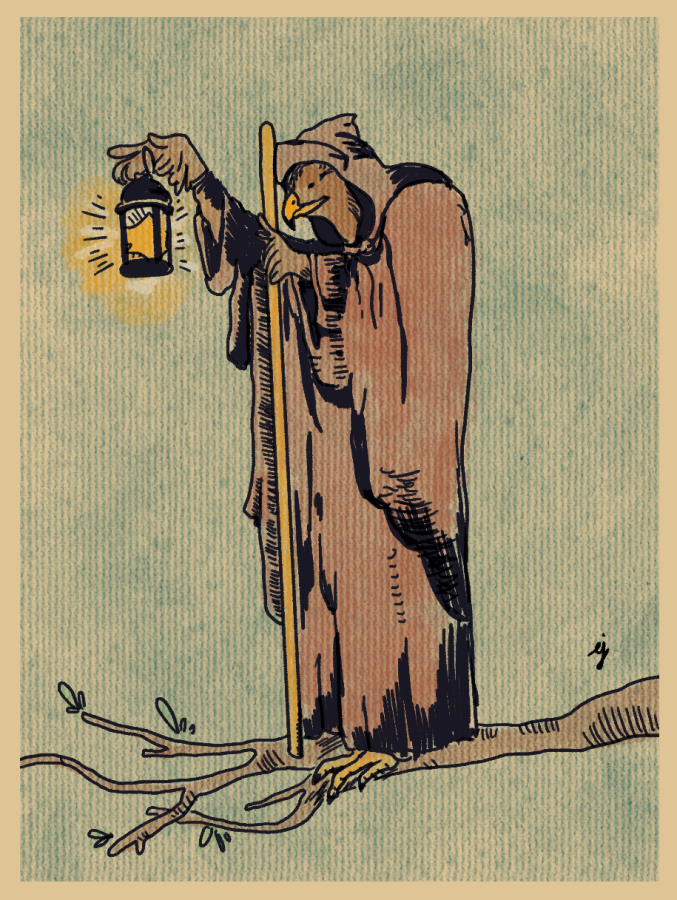 As the Crow Column explodes in popularity among students, many of our readers are wondering: “Where do the crows get their infinite wisdom?”

To answer this question, our reporters climbed to the top of the Eucalyptus trees down by Lovik field to speak to the experts. The first reporter was chased off the tree by the territorial crow murder, but the second managed to win the crows over with an offering of shiny paper clips and foil wrappers.

One of the older crows revealed that their community lives under the wisdom of a wise, old hermit in the area. He is elusive and rarely leaves his nest, but many students may have glimpsed him when he wanders the campus grounds. Although unsure, the crows believe he resides in the woods just behind the Clark buildings.

This bird is, interestingly, not a crow, but a red-tailed hawk. Legends surrounding the bird are countless in the crow community.

Some say he came from the far off land of Illinois, though before that, no one knows.

Others say he is immortal, spending a lifetime at one college before moving on to the next.

Some have even claimed him as the prophesied savior of the Westmont crows who will save them in the midst of some great tragedy.

A smaller sect within the murder believes we are living in the great tragedy now, seeing as many people are losing the bottom half of their face and Westmont students seem to disappear and reappear randomly five to ten days later.

Whether or not this hawk will fulfill the prophecy, our reporters sought to ask his thoughts on the expectations laid on him.

After about seven laps around campus, the fastest of our reporters finally caught up with him. He claimed he had meetings to attend to and that he was giving a speech in chapel later that day, but had time to talk for a moment. Note: hawk translation is tricky, so he could have said either “speech” or “screech.” His introduction was also difficult to understand, but his name is roughly translated to “Rayle Reere.”

Before Reere departed, he offered these words of wisdom: “Do you want to hear my Kermit the Frog impression?”

He proceeded to share the secret to the meaning of life and world peace in an impeccable Kermit impression. Unfortunately, our reporters were too enthralled by the talent to remember what he shared.

As Reere departed, he encouraged any and all students to sit with him for a bit, if they ever stumble upon him sunbathing on a tree limb. If that student is lucky enough, maybe Reere will share his wisdom as he impersonates Kermit the Frog.