An all-around artisan: Music professor Dr. Brothers to retire in May 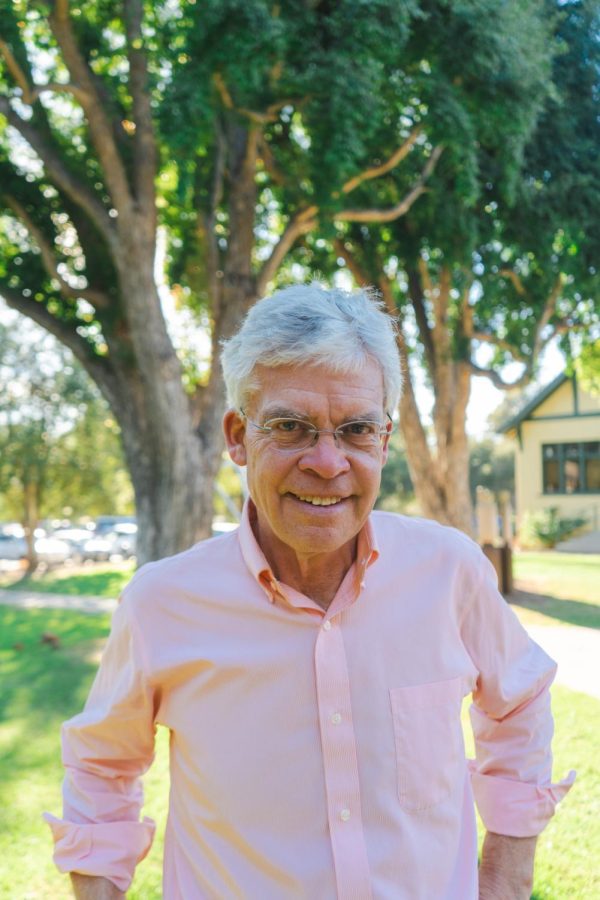 Dr. Matthew Grey Brothers, a musicologist, teacher, conductor and singer, has worked in Westmont’s music department for 27 years and plans to retire this summer. Westmont’s reputable music department extends musical opportunities to all students, a gift Dr. Brothers — a liberal arts model himself — has championed.

In his experience, many students entered the music department feeling “not good enough” at reading or playing music. Still, Dr. Brothers encourages them: “I can tell them from experience: I didn’t read music until I was in my mid-twenties!”

Raised in Ventura County, Dr. Brothers grew up singing in church choir his father directed and playing the bluegrass mandolin. His brothers played folk music with him and his parents were teachers as well as “classically trained musicians [who] gave piano duet concerts locally.” Along with the mandolin, Dr. Brothers learned to play fiddle and guitar — all by ear.

Dr. Brothers describes his academic history as “rather strange.” After majoring in renewable natural resources at UC Davis, he worked first in construction and later on a farm. Though he continued to sing in choirs and play various instruments, he did so by ear. “I didn’t read music,” he explained. In his 20s, he decided to learn more music, so he enrolled as a part-time student at UC Davis while continuing to work in construction.

“That’s when I say I became legit,” he laughed. “I learned how to read music and started conducting choirs and singing.”

After he married his wife, Carrie, the couple moved to Santa Barbara, where she studied special education at UCSB and he worked in a ceramic tile apprenticeship. After Carrie finished her studies, Dr. Brothers began his doctorate in musicology at UCSB. He also began directing the music at Trinity Episcopal Church, which he did from 1986 to 2021.

While a doctoral student at UCSB, Dr. Brothers also began teaching at Westmont as an adjunct in 1995. After one year — though he had yet to finish his dissertation for his doctorate — he was hired for the tenure track position.

Despite the stress, Dr. Brothers added, “I really felt like this was … the best place for me. I’m sort of a generalist: a practitioner of music but [also] a musicologist, and I can do all of those things [here]. ”

When asked what he wants students to take away from his teaching, Dr. Brothers responded, “[studying music] increases my enjoyment and delight of it. I just hope [students] come out of my classes loving music more.”

Second-year student Daniel Macy is currently in his second music history class with Dr. Brothers and has played violin under Dr. Brothers’ direction in the Christmas Festival and in collaboration with Choral Union. Dr. Brothers, he observed, has a “heart to quietly, yet efficiently, serve in whatever capacity he’s in … blessing those around him. It’s just that humble spirit of glorifying God that I hope to emulate in my life.”

Macy added, “His identity isn’t found in his career. His career is incidental to wherever God’s calling him to be in that time … [and] he’s such a multi-faceted individual.”

Dr. Daniel Gee, a colleague of Dr. Brothers in the music department, expressed, “He’s someone who knows the liberal arts well and is very supportive of the mission of the college. It’s hard for musicians sometimes to be integrated into the liberal arts because our craft is so specific … so I think he’s really inhabited and absorbed the Westmont ethos.”

Dr. Brothers expressed gratitude towards his faculty colleagues for “[encouraging] me to be a scholar, to be curious, [to] ask questions about a lot of things.” Whereas in grad school he noticed a competitive environment, he has found the opposite at Westmont: “I’ve been welcomed into a supportive intellectual academic community in which the life of the mind [is] really encouraged in a very supportive and loving way. That’s been great to pass on to students.”

During his time at Westmont, Dr. Brothers founded the Westmont Chamber Singers and taught the men’s chorale, which Dr. Gee participated in as an undergraduate student. “That was my first time singing in a choir,” Dr. Gee said, “so, in a sense, he was my first choir director.”

Dr. Gee also took music history classes with Dr. Brothers and later rented a room from him while teaching as an adjunct. “He’s become a wonderful colleague, a wonderful friend and someone who I feel like is in the trenches with me,” he expressed.

Macy described Dr. Brothers’ teaching style: “He’s not a lecturer. Macy explained. “He won’t just sit there and talk to us. He tries to engage us through asking questions … and does everything possible to make [the music] come alive. He doesn’t just tell us about Renaissance dance forms — he actually kicks up his heels and dances a jig. It’s delightful how he makes it real and personal instead of just some academic, high-brow endeavor.”

Further describing Dr. Brothers’ teaching approach, Macy continued, “[He has] an availability, a willingness to invest, and a sort of contagious enjoyment in the subject. [It’s] this balance of demanding a lot as far as the information we retain and command — but also doing everything in his power to make sure that we acquire that information.”

Speaking of Dr. Brothers’ character, Dr. Gee noted, “He has a graciousness and open-mindedness about … most things in life. That is really refreshing, and it’s easy to learn from someone who is very safe and someone who just shares his thoughts without making [it seem] like you have to agree.”

Macy agreed: “Whether it be music or life decisions, or even politics, he’s a very humble man … knowledgeable, but down-to-earth. I think that is especially nurturing in an academic context, because it gives you the freedom to explore, to stick your neck out there and possibly make a big mistake, because you know you’re not going to be looked down on. Your efforts will be valued.”

First-year student Claire Nemec has enjoyed being in Choral Union under Dr. Brothers’ direction this year, highlighting the love he has for his students. “I feel like he still treats each different year of Choral Union people like they’re his favorite,” she said, “even though he’s been doing this for a long time.”

Dr. Brothers similarly expressed a love for the people at Westmont, saying he’ll miss faculty friends the most when he retires. “Some faculty members I’ve known for many years,” he said. “I just really like being with the people and having rich conversations [at faculty forums] … I think laughter is a great thing, and there are so many people [there] who are so funny.”

“He’s really goofy and jokes around with us,” Nemec added. “He wants to be there with us.”

Despite his attachment to the people, Dr. Brothers’ love of learning is what has led to his retirement. After realizing his “learning curve had flattened” because he had been a professor for so long, he decided to try new things “like growing things together with my wife, raising animals, doing some more building.” He added, “I ride a road bike [at least] 75 miles a week, so I want to do more exercise and be outside more.”

Reflecting on Dr. Brothers’ legacy at Westmont, Dr. Butler said he has contributed “a very high standard for musicology” as well as musicological research, especially in Spanish religious music. Dr. Brothers has delved deep into this topic, having recently spent a year in Mexico.

Dr. Gee summed up Dr. Brothers’ time at Westmont as “a journey and a career well served.”

“He’s a pillar of the music department,” Dr. Gee stated. “We will miss him.”

“I think [Dr. Brothers] has really touched Westmont’s campus,” Macy reflected, “and his legacy is going to live on through Chamber Singers, Choral Union and all the students he has really impacted.”