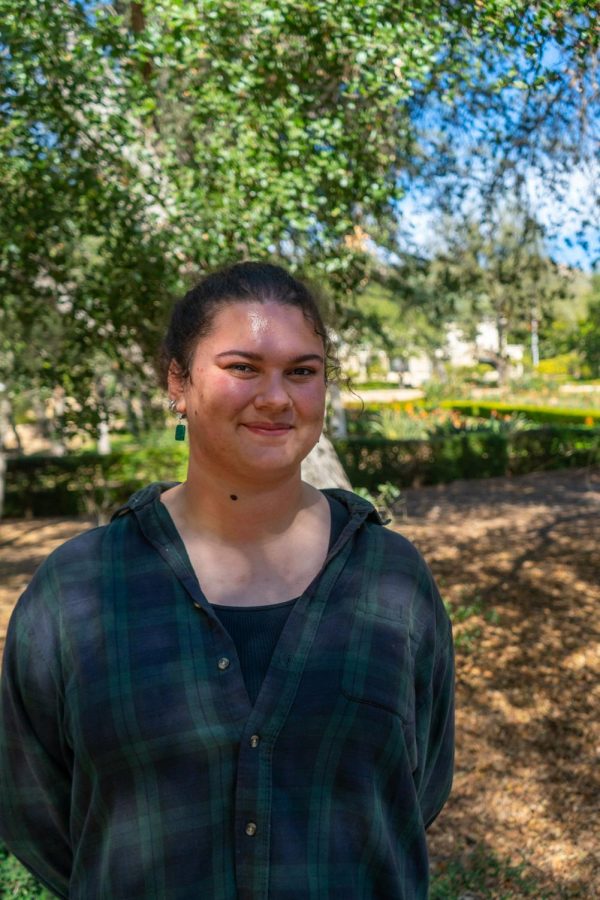 In her final semester of college, Amarilis Falconi has committed herself to serving and pouring into her community. As a multi-ethnic international student, Falconi quickly became involved with Westmont’s Intercultural Programs (ICP) and connected with other individuals on campus who identify as members of a minority.

With a Belgian mother and an Ecuadorian father, Falconi spent the early parts of her childhood between California, Costa Rica and Florida before settling in Belgium for the majority of her schooling.

During her sophomore year of high school, Falconi visited the U.S. with her family to tour colleges. When they arrived at Westmont, where her mother had also attended college, Falconi “really liked the campus because it’s beautiful.”

She also recalled that “having a good relationship with professors is something that was advertised a lot, and I liked that idea.” Falconi explained, “Since I had to do SATs and college applications on my own time, outside of the school system I was in, I ended up only applying to Westmont.”

Though Falconi faced culture shock transitioning from her French-speaking school in Belgium to an English-based education, she noted, “It probably helped that I went to international orientation and met a bunch of people who were kind of in the same boat.”

In recognizing the differences she had to adjust to in California, Falconi cited the weather, the pervasiveness of food chains, the emphasis on consumerism, and “how casual/extraverted people are.”

Falconi also noted, “Sometimes the language is a struggle … I don’t have an accent, because English is one of my first languages, but I didn’t go to school in English, so having to learn to write academic papers and sometimes Google translate my thoughts was an interesting experience.”

In addition to academic changes, Falconi recalled some of the challenges of connecting socially: “The first couple months, every time someone asked [me] as a freshman, ‘Oh, where are you from?’ I’d have to decide if I wanted to go into a five-minute explanation or just try to give a brief rundown that might need more questions.” Ultimately, however, Falconi befriended “a lot of people who would consider themselves minorities on campus,” which she suspected “might have [created] an easier understanding” of each other’s experience.

Beyond the personal adjustments she faced, Falconi said, “something that has been challenging is how to navigate an institution and the culture of the institution, which might directly or indirectly cause a lot of stress or feelings of alienation in people I care about.” Throughout her time at Westmont, she has found herself learning “how to navigate either doing something about it or caring for people and being able to understand them, or understanding myself and what that means.”

When asked to share what she learned about how to support those around her, Falconi said, “Typically, when people find other people who can share words and experiences to describe what they’re feeling, it seems to be very comforting, that they’re not alone and they’re not crazy, because these things do happen and there are ways to describe it.”

Throughout this journey of navigating Westmont as part of a community filled with people who identify as minorities, Falconi found that “Intercultural Programs for me has played a big part in learning … and trying to just build community.”

Falconi’s dedication to this community is evident in her approach to co-leading the Global and International Students Association (GISA) with Mangok Angong Mahdi and the Multi-Ethnic Student Association (MESA) with Caleb Beeghly. Falconi explained, “the motivation behind [entering leadership] was that I wanted to be involved with ICP and serve as much as possible, and, for me, the most effective way of doing that and ensuring that I would be present was to take a leadership position — which ended up being two this year.” She observed that this “is extremely ironic to me because I don’t really see myself as someone who’s prone to leadership positions.”

Falconi described her involvement in leadership as a learning process, explaining, “It’s forced me to be more organized, or at least try very hard to be and get better at communicating.” She added, “I like to think a lot before I act, and I need to be able to just execute things more efficiently.”

Through her learning process, Falconi expressed deep appreciation for the other leaders she has met: “I really enjoy working with other people and being able to share experiences but also ideas, and being able to support each other.” She also noted that she “ended up having a lot of friends in leadership positions, which is kind of funny, but also really cool.”  She added, “It’s really inspiring, I would say, to be surrounded by a lot of people who are committed to involvement.”

As for the students who inspire her, Falconi cited alumni Katy McDonald ‘21 and Brendon Fong ‘20: “In terms of other people who’ve now graduated, Katy McDonald … we were roommates, and I really appreciated being friends with her and learning together … Brendon Fong is also a really big inspiration to me because of his commitment and how caring of a person he was.”

Alongside the many students she identified as “committed to embodying their values,” Falconi mentioned that “it’s been really valuable to have access to academic resources and professors that are really passionate about what they’re doing … It’s really good to build relationships with people who know a lot more than I do.”

In acknowledging professors she has connected with, Falconi included English professor Dr. Kya Mangrum and religious studies professor Dr. Sameer Yadav. As a biology major, “In the bio department, Beth Horvath has been a really big inspiration in terms of curiosity and passion for what she does in marine biology. I’ve been doing research with her and I’d like to continue that academically.”

Through her experience with Dr. Horvath, Falconi came to realize: “I eventually would like to go to graduate school for marine biology, and I think a combination of research and conservation is what is most interesting to me.”

Offering a fuller picture of her future plans, she added, “I’d like to take a break before [graduate school] and get some work experience, internships, stuff like that. Maybe not be graded on things.”

Reflecting on her time at Westmont, Falconi said, “I have been forced to grow a lot during my almost-four years of college, and I think part of that is also because of the global pandemic and other things, but I’m really thankful for the people who have been around me while that’s been happening, and that’s helped me a lot to figure out what’s important to me.”

Falconi identified “community [as] something that’s really important to me” — a value embodied in her involvement in GISA and MESA. In terms of hopes for life beyond graduating Westmont, Falconi said, “I would like to be able to continue to invest in a community, wherever that may be.”