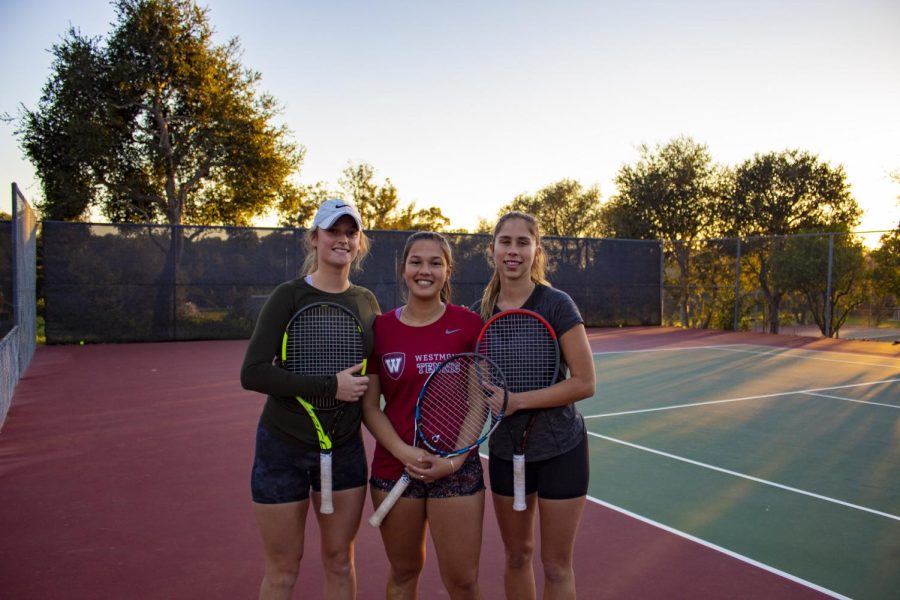 The Women's Tennis team is looking forward to a successful 2022 season.

The Westmont men’s and women’s tennis teams started off the 2022 season in full swing. With a few matches for both teams in the books, we look at what the rest of their seasons hold.

The men have already started preparing for competition season with their most recent scrimmage against Ventura Community College, which “produced a lot of great tennis from every player contributing in either singles, doubles or both,” second-year Ethan Ha explains. Their first official match against California Institute of Technology — better known as Cal Tech — is coming up on Saturday, Feb. 12, at 1:00 p.m. The competition will take place right here on Westmont’s Lynn Abbott tennis courts.

The Westmont women’s tennis team kicked off their first match of the season against the NCAA Division I Matadors from California State University, Northridge. The game ended 7-0, but the team’s associate head coach Cade Pierson comments, “We intentionally schedule these high-level division one teams at the start of the season. These matches set the tone and a standard for the rest of our season. I’m excited to take what we learned in this match and apply it in the future.”

Coming off a highly-focused pre-season in the fall, second-year Logan Jackson and her team have begun reaping the benefits of their hard work despite the outcome of their first match. Jackson observes how their practice matches against teammates have demonstrated a readiness for the season that boosts the women Warriors with confidence and an optimistic ambition. “I can’t wait to see what all of my teammates accomplish in the next few months,” Jackson proudly states.

With three more months in the remainder of the tennis season — four, if the Warriors take it all the way to nationals at the end of May — both teams are honing in on their collective and personal goals to help them persevere in the long run. As a team, the men’s team aims to glorify God in all they do, on the court during matches and off the court through win and loss. Personally, Ha aspires to earn All-Conference with doubles partner and second-year student Logan Thompson, contributing to the team’s efforts to compete at Nationals while doing so.

The women Warriors are keeping their season goal simple, but nonetheless challenging, in order to “start [the season] strong, and finish stronger,” says Jackson. With one year of college tennis under her belt, Jackson is that much wiser and even more eager to apply the lessons she learned from last season: “What I noticed in my freshman year … is that players are similarly matched in technical skill; the ones who really excelled were those who had physical and mental grit.” Progressing in her physical and mental strength, Jackson concludes, “I’m excited to battle it out on the courts again, but not as excited for those tennis sock tan lines!”

We wish both teams the best of luck and all our support as they continue their seasons! Stay tuned to the Westmont tennis season as the women Warriors compete against the Golden Eagles of California State, Los Angeles on Feb. 3 at 1:30 p.m. and the men against the Cal Tech Beavers coming up on Feb. 12 at 1:00 p.m.