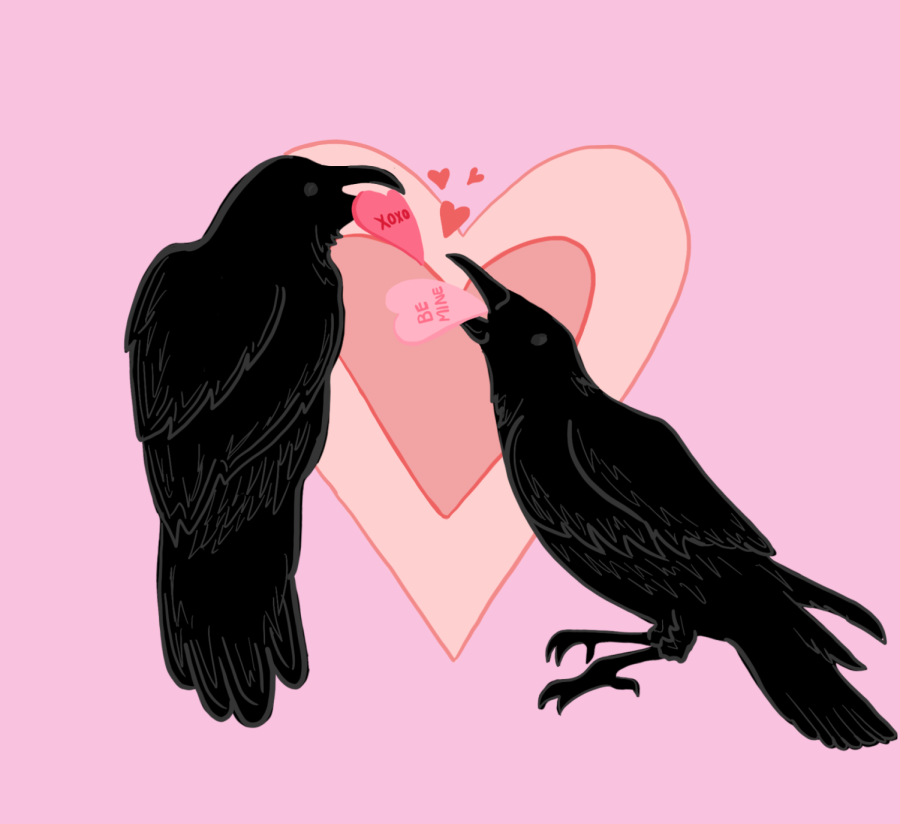 Roses are red, violets are blue, be your crow's Valentine, or they'll never forgive you.

Love is in the air. Quite literally, in fact, as the mating season quickly approaches for our beloved crow companions who are taking to the skies.

Crows, following the good Christian example they have been given, will only have one mate whom they will stay with for the rest of their lives. As the spring season rolls in, crows begin to pair off, wooing their loves with nuts, seeds, shiny trinkets and trash.

You bird watchers out there are in for a treat as the crows partake in their complex mating rituals over the next few weeks.

First, one crow will choose the crow they want to spend the rest of their life with and follow them around campus, intentionally spending time in places where the chosen crow tends to roost. The pursuer will then make the humble request to sift through the trash cans outside of Richie’s with them. At this time, the pursueé remains unsure of the pursuer’s intentions, since Richie’s is a casual meeting place, yet they will be ecstatic, squawking to their friends about the amazing “date” they had.

This dance continues until one of the crows is brave enough to reveal their feelings. Mere minutes later, the male crow will fly across campus to select one of the plentiful engagement rings on campus and offer it to their new mate. They will then spend the rest of their lives together.

For any new bird watchers finding it difficult to distinguish between male and female crows, note that the males tend to look a bit roughed up. Their feathers may be a bit askew and they might have some scratches on their beaks.

This is both a result of the male crow’s impulsive nature, combined with the fact that there are many more female crows in this area compared to the male population. This disparity often leads to arguments where multiple females squawk over those males that have yet to find a partner.

Desperate fights often break out in the short window of finding a mate, so male crows are almost always fending off two or three female crows at a time.

An announcement from Westmont’s Executive Team was recently released, informing students that they are required to be married in order to graduate, which has caused a growing anxiety among fourth-year students, due to the influx of engagement ring thefts.

One student shared, “I had everything perfectly planned out. I was going to propose in the DC, since that’s where we first shared a plate of french fries, but just as I got down on one knee, a crow flew in and took it right out of my hand! I didn’t think crows could even get into the DC.”

Take advantage of the romantic atmosphere to pursue your own mate. Maybe, instead of an awkward Richie’s date, invite your crush to go crow watching. Be warned though, any students intending to propose should keep their engagement rings well hidden so no crows take advantage of the moment.