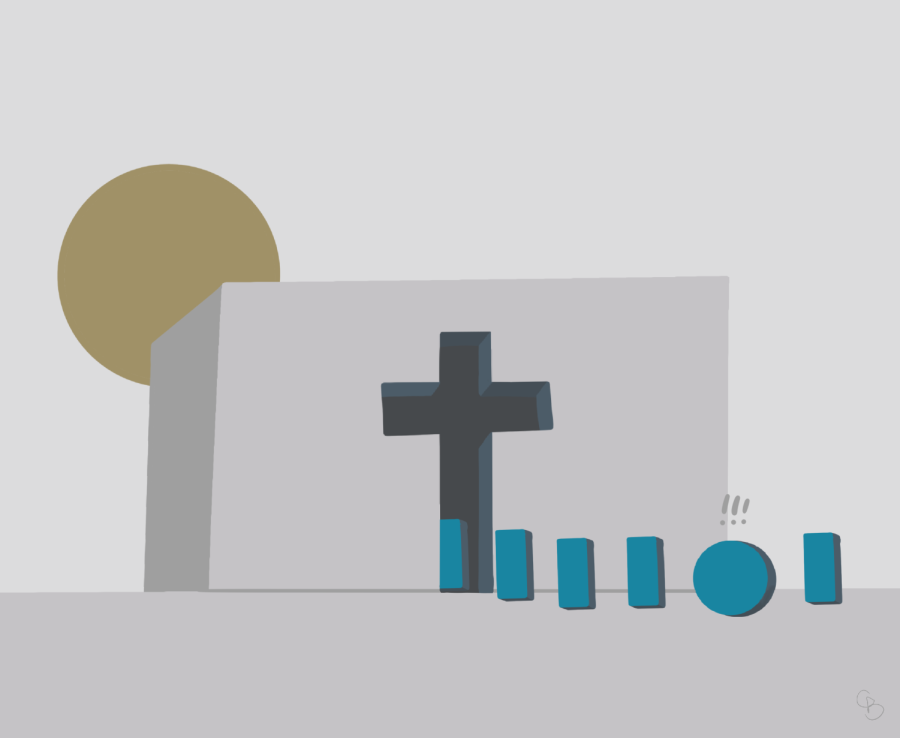 Although Westmont is a Christian college, not everyone on campus agrees with the beliefs held by the college. Westmont’s mandatory chapels are one aspect of the college that most strongly promotes Christian values, which raises some controversy among the student body. The required, thrice-weekly gathering creates tension, especially for students who don’t identify as Christians.

Cruz Dominguez, a third-year religious studies major, identifies as an agnostic. He grew up attending church, however there is an incongruence between the image of God presented by the Western evangelical church and Dominguez’s personal experience. The incompatibility between his experience and the image others have of God leads him to skepticism in accepting Christian faith.

Noting some of the Christian practices he has found unhelpful to fostering a relationship with God, Dominguez said, “I don’t go to church very often [and] I don’t pray very often. I haven’t been worshiping through song.”

Instead, Dominguez explained, how he has sought God through becoming “quietly aware of the ways in which He’s out there.” Dominguez’s comment sheds light on the limitations non-Christians may feel regarding Westmont’s expectations concerning a student’s relationship with God — expectations that saturate the chapel experience.

Patrick Otte, a second-year student, also has a complex faith background. Although Otte grew up in a Christian home, he was never forced to attend church or engage in Christian practices. Though he cites Buddhism — which he began exploring in high school — as the base of his spirituality, he incorporates Christian characteristics — such as prayer and gospel music — into his spiritual practices as well. Otte said he has “an ability to connect with something higher.”

Both of these students expressed sympathy for the chapel requirement, understanding of goals behind mandatory attendance. Otte identified chapel as Westmont’s attempt “to preserve that [evangelical Christian] culture.” He understood chapel as “an indicator that Westmont is trying to attract a certain type of individual” who will suit the campus culture.

Dominguez said, “The people in charge of chapel are under the belief that God is truly real, so it makes total sense that they would believe chapel is ultimately and will forever be a good thing … [chapel] is completely within the logical and reasonable boundaries of their worldview to command such a requirement of the students.”

Otte also recognized chapel as a space for Westmont students to share thoughts and beliefs about their identity. For example, he has noticed that chapel has focused on many social justice issues. Through this, Otte thinks Westmont is trying to say “‘We’re a Christian campus … but we also care about what’s going on in the world, and we’re trying to make an impact.’”

Otte and Dominguez highlighted some positive aspects that they appreciate behind the perceived motivations of mandator chapel.

Both students recognize the value of its community-building aspect. Otte also appreciates the ritualistic aspect, in the sense that “you know what you’re going to get.” He also noted that, when he goes to chapel with an open heart, he can gain something from it, showing that chapel can provide “a sense of spiritual guidance.”

While some non-Christian students express sympathy for those in charge of chapel and recognize positive aspects, the point of this article isn’t to take their opinions as full acceptance of the requirement and experience.

Dominguez shared, “[Chapel] stresses me out. It just doesn’t feel good to go. It feels like it wastes all my emotional energy.” Dominguez would prefer to take faith at his own pace, but finds chapel to be “an environment where my ideas of spirituality in the way I want to connect with God are simply not possible.” In Dominguez’s experience, chapel limits his ability to choose and discover his own relationship with God.

In addition to the personal impact chapel has on students, Dominguez and Otte observed the large-scale negative impacts chapel has on Westmont’s culture. Otte asserted, “the fact that it’s mandatory can create a culture of hate, rejection and division, in a sense.”

Considering the way requiring chapel might create hatred, Dominguez pointed to the way it has “taken away [students’] capacity to say no” as a potential cause. He explained, “When something is required, if one does not want to do the required thing, there is now hate.”

Dominguez added, “Attempting to make relationship with God into a mandated practice is simply dangerous by definition.” While he conceded that “one can mandate or schedule relationship,” Dominguez stressed that “both parties must have the capability to consent … to willing enter into that relationship.”

Alongside their critiques, Otte and Dominguez included ways in which they believe some of the tension chapel creates could be resolved. Otte is a strong advocate for optional chapel, highlighting the importance of free will and higher likelihood of excitement in participation and attendance.

Dominguez likes the idea of providing different forms of chapel, such as a Bible study or small group form, because “if there’s any way I’m going to grow right now, it’s not going to be in a worship service like that, where I just feel uncomfortable and angry … It’s going to be in a setting where my friend[s] get to talk to me genuinely about what they believe and why they hope and pray that I will one day also have those beliefs.”