The sublime scramble of the Seven Falls Trail 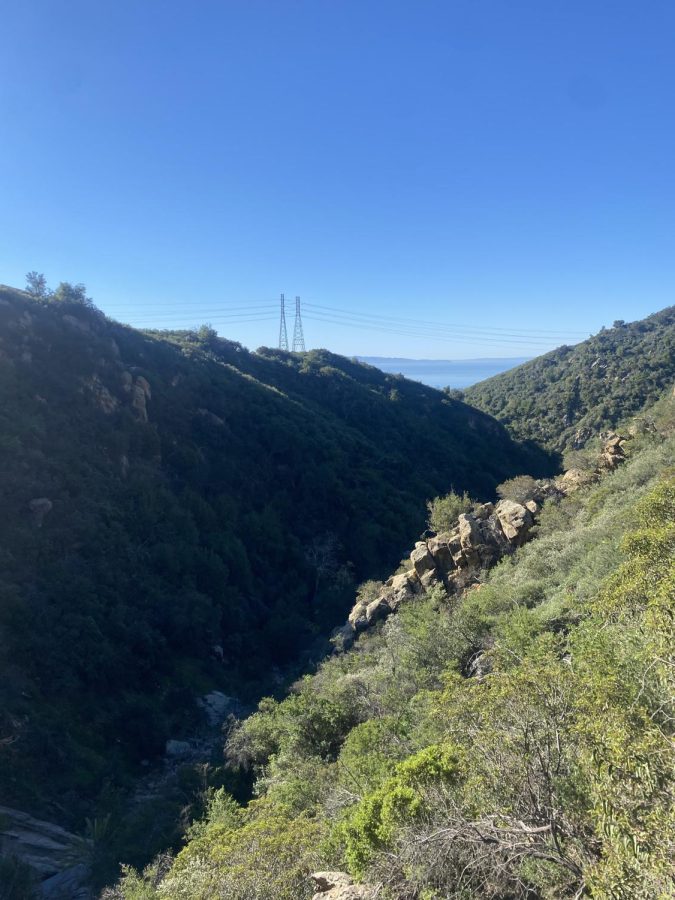 View from the Seven Falls Trail

The luscious, shady trees on the Jesusita trail merge onto a three-mile trail known as Seven Falls, beginning across the river from the Santa Barbara Botanical Garden. Flowing waters run from the Santa Ynez mountains and cascade into the deep pools of the mountain. There are seven falls along the creek, each containing their own pool where hikers can enjoy a plunge.

For thousands of years, the falls have been affected by erosive forces chipping away at the Matilija Sandstone which makes up La Cumbre Peak that houses the falls. The water and sand grind against the mountain as they move downhill, creating the falls and deep potholes that make up the Seven Falls Trail. The formation of the pools created one of the most popular trails in Santa Barbara, dating back to the 1800s.

The trail begins at Tunnel Trail, a paved access road for Edison Company that turns into a 3.5 mile hike that includes a lookout of the city.

Tunnel Trail winds up behind the gated road for about a mile until it reaches a turn off to Jesusita Trail. Eventually, the Jesusita trail reaches a section of the creek that leads up to the Seven Falls.

The easiest way to reach the falls is to follow the rocky creek bed for about half a mile until it opens up to the pools.

For the dauntless adventurer, a separate path leads to the top of the falls. Adventurous hikers can traverse the crumbling dirt and loose rocks as the path stretches alongside the creek up into the mountains, eventually opening up to a magnificent lookout over the falls.

During the winter, the falls retain water in the pools. During summer and spring months, water flows from the mountains into the pools, allowing visitors to swim and slide off into the deeper pools.

Prior to the early 1900s, the Seven Falls flowed year-round. Since then, a tunnel was cut through the Santa Ynez mountains and the Los Padres National Forest — which supplied the falls with water — redirecting the water that would have otherwise flown through to the falls.

English professor Dr. Paul Willis — an experienced hiker in the Westmont community — talks about his multiple excursions on the trail, saying, “I remember — years ago — I remember scrambling up, sort of rock climbing around the pools … Apparently above the seven pools there’s a waterslide. Climbing up gets to be a bit of a challenge.” Even now, Dr. Willis still finds time to adventure on precarious hikes such as the Seven Falls.

When the pools are full, the trail is heavily trafficked with hikers enjoying the cool waters. Until the turnoff to Jesusita Trail, the path is mostly uncovered and uphill, making it a challenging hike in the warmer months of the year.

Even during the dry season, the Seven Falls hike remains spectacular, and some pools retain the mountain water.

“If you don’t mind a little adventure and playing follow the leader, this hike is so worth it … The trail can be a little confusing because there are a few different trails that all merge [into] this one area, [but] don’t let that deter you, because it’s an adventure that is well worth it,” remarked a recent hiker of the trail, Alia Gamblin, in her review on the All Trails app.

This trail is definitely not for the faint of heart due to the seemingly never-ending scramble to the falls. Despite the challenge, the hike is worth the struggle to reach the majestic pools, which provide cool relief from the hot sun.