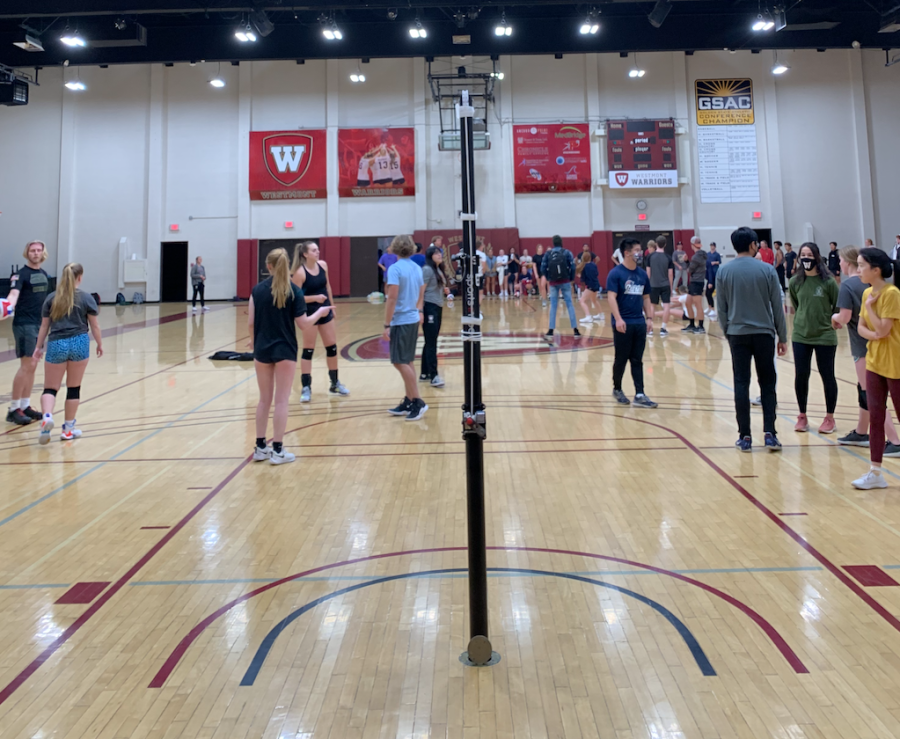 Intramural volleyball competes on Wednesday in the Murchison Gym.

After two years without intramural sports at Westmont due to COVID-19 protocols, the program is back, and students are thrilled. This year, the program hosts three sports: basketball, soccer and volleyball.

All sports are played in the Murchison Gym, with basketball taking place on Mondays, indoor soccer on Thursdays, and volleyball on Wednesdays.

Games start at 9 p.m. and run until about 11 p.m. Whether you are on a team or want to cheer your friends on, it is a great way to be active and take a break from homework!

Students form co-ed teams of six or more people and choose the sport they want to play. No prior experience is needed, however, there are brackets and a schedule, so teams remain somewhat competitive while having fun.

Both Westmont athletes and non-athletes play together, forming a different sense of community, sharing their love of sports.

Corban Muthiah, a first-year playing volleyball, said he most enjoys “the community that gets built.” He added, “Whether it’s people [he’s] already friends with or new people, [he’s] able to connect on a sports team in a way [he] doesn’t get to in everyday circumstances.”

Being on a sports team requires communication and commitment, even if it’s just for fun. Competing with and against friends or acquaintances give students the opportunity to strengthen their connections at Westmont and create memories during their time here.

Muthiah acknowledges that he has gotten to know his current friends better, but has also made great new friends just by “working together and having fun.”

Second-year Mitchell Wybenga plays indoor soccer, a sport he had played for years before attending Westmont. He shared, “after playing soccer at a high level when I was growing up and deciding not to play collegiate athletics, this is a great opportunity to compete and play hard with fairly low commitment.”

Second-year Nick Gipson competes on a basketball team and shares that he “loves that it’s competitive, but [also] a good atmosphere, and that a lot of people are super excited about it.”

He also notices how so many people come together to have fun, acknowledging the special sense of community the program brings. However, Gipson mentioned that the referees seem as though they don’t know much about the sport, potentially endangering players if they don’t mediate the game properly. Despite this, players still seem to have a great time.

Playing on an intramural team is fulfilling and exciting. While staying active, students have the opportunity to make new friends or strengthen bonds with their current friends.

If you are not on a team, but you are interested in what the program looks like, stop by the Murchison Gym and sit in on a game! Those participating in the program have nothing but good things to say, and Westmont is excited to finally bring intramural sports back.