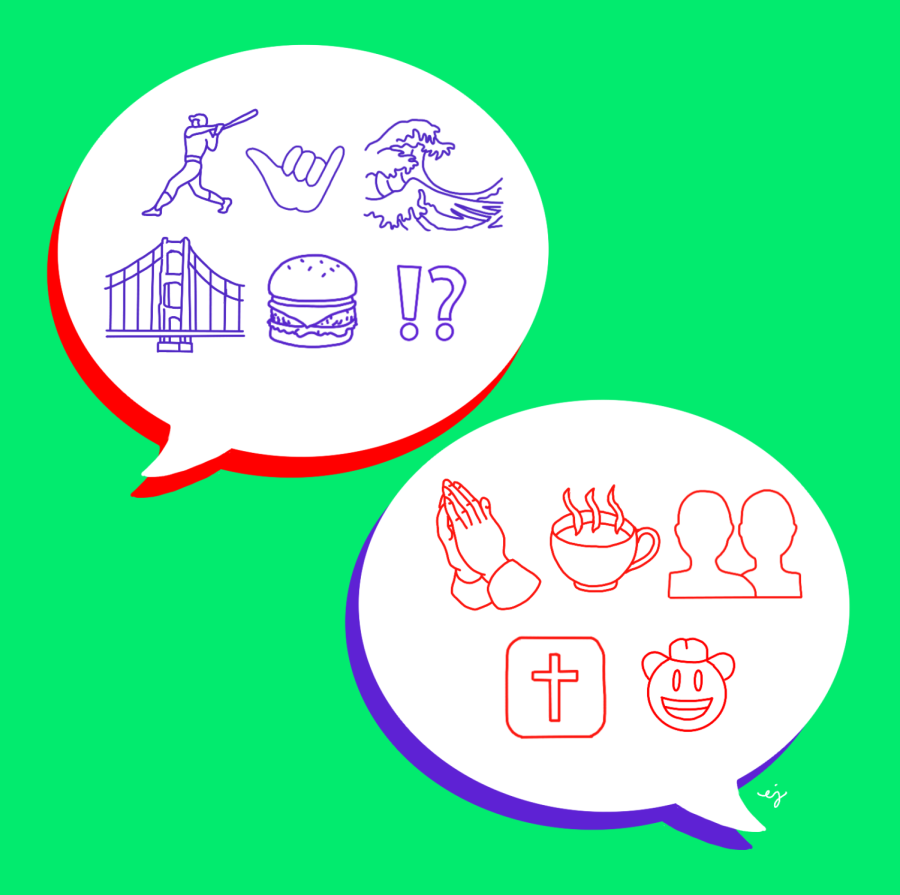 Many English dialects are spoken at Westmont: from surfer lingo to African American Vernacular English (AAVE); baseball idioms to Christianese; students who switch between accents to others who rely on literary English. According to several Westmont students, each variation is tied to social factors, values and perspectives.

Third-year math major Luke Morse grew up in Southern California, and he noted “surfer” as one of two dominant dialects in his circles at Westmont.

Lying down on the grass, Morse leaned back on his elbow casually to portray this form of speech. He described people who use this speech as “guys who talk as if their body posture was like this … even though they can be standing up straight. Just like, “What’s uup, broo? … Lots of uptalk at the end of sentences and … extended vowel sounds.” Morse explained that “uptalk” features rising vocal pitch at the end of phrases.

Third-year communications major Phoebe Lu said she learned that uptalk has become common outside the surfer dialect as well. “We do … uptalk to say statements like they’re questions, which … might be a reflection of how truth has become a subjective thing. Whatever we say, we don’t want to put forth as the absolute truth, so we inflect; we uptalk because we don’t want people to reject us for something they don’t believe.”

“The result is that we sound unsure of what we’re saying,” Lu observed. She said language has acquired a “people-pleasing function,” explaining, “We’re afraid of disagreement.”

According to Morse, another dominant dialect at Westmont is “Christianese,” which he defined as “overly spiritual Christian catch phrases” such as “God sees you,” “God loves you,” and words like “season” and “seeking.”

Morse said that although certain settings, like a Capax Dei group, “prioritize” Christianese, he usually tries to push back against it in his daily conversations, intentionally using blunt terms to describe his relationship with God. He explained his dislike for Christianese, which leans towards “elevating the speaker,” as if he or she had a “better relationship with God, because I have all this fancy language to convey [it].”

“When I hear that, I’m like, ‘You’re describing a relationship with God in a way that feels super empty.’ But to the speaker … this is the deepest language they have to convey something so deep and complex.”

Concentrations of dialects — whether surfer, Christianese or the AAVE spoken by friends of his from San Francisco — vary within his friend group, Morse recognized. He noted that one of his friends tends to speak AAVE in all settings while another friend speaks AAVE more when with other speakers of that dialect. Either way, Morse observed that the San Francisco variation carries a “communal” feel.

Third-year student Russell Bell from Atlanta, Georgia named another linguistic variation: ‘baseball dialect.’ This linguistic subgroup “applies [baseball terms and phrases] to everything,” like using “home run” and “ball park” metaphors, even when talking about the DC. He observed that likely every sport, inside and outside of Westmont, tends to produce its own dialect among players.

At Westmont, Morse and Bell have also heard a dialect that sounds like standard written English. Morse called it “elevated English” and listed several people who daily speak “contemplatively, with long pauses and then very fast sentences … with precise, niche words.” Another name for this dialect, Morse said, could be simply “adult.”

Adults, he explained, like to hear speech “with confidence and intention,” and Morse noted that this dialect is “not common in our age group.”

When asked what influenced such speakers and how they learned to speak that way, Morse noted a common factor in most of the people he named: they are classical musicians. He described the classical music social circle as being of “high social esteem … refined and proper. That probably has an influence on language.”

Morse mused that an individual’s values also influence the language they use, explaining that one of his “elevated English”-speaking friends named beauty as one of his highest values. By contrast, he credited a friend, Trevor White, for calling his attention to the fact that a surfer phrase like “‘goin’ to late night TB-zees with the boyz’ [emphasizes] fun, leisure … and the sense of male camaraderie that goes with surfing.”

Morse observed that language “reflects perspectives,” as well. “People who speak Christianese perceive God working in ways that I don’t,” he remarked. “The same could be said with the Southern California accent, people in that dialect tend to talk … slower, [and] those types of people really want a laid-back … slow-going lifestyle … I think that’s true for any person’s way of speaking: it reflects certain things about how they perceive reality.”

Some Westmont students, Morse and Bell observed, tend to code-switch between variations and accents.

First-year student Noah Nims, for example, said his dialect changes “when I’m in Indiana for a while. The tang [like ‘y’alls’ and ‘oh dare’] will start to come out over time — to assimilate.” Nims said when he comes back to Westmont, his dialect changes again “very quickly.”

Similarly, second-year student Simeon Michelson said, “As an actor and improv-er, I love … [having] conversations with my friends where we switch tones and voices … Some of my deepest conversations happen when I’m talking in a British accent with friends. There’s something about the silliness, vulnerability and sense of detachment from speaking in a different accent that makes me feel freer to speak honestly.”

“Code-switching is … beneficial in some settings, just for the ability to understand each other,” Morse commented. “There’s got to be a balance between wanting to be true to yourself and true to your culture — not trying to change [your dialect] for people who are … not wanting or not trying to understand you as they should; but also to communicate clearly in ways that people can understand. There’s a balance. I don’t know what it is.”

Bell similarly expressed a desire for balance in using dialects. In his words, “I think we should enjoy [language] like different flavors of food!”