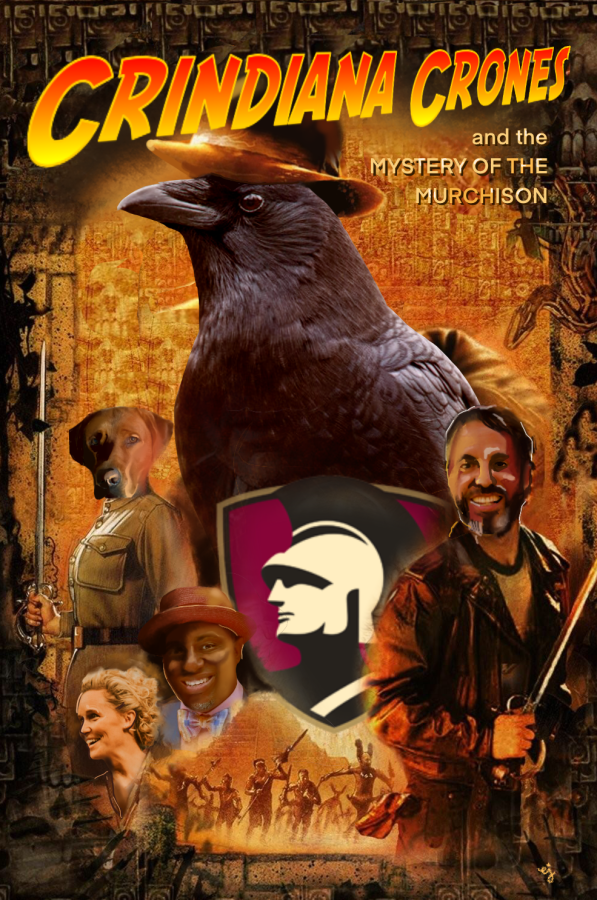 New movie poster for the Adventures of Crindiana Crones!

Since the founding of Westmont College, the campus has been flooded by crows with their everyday lives and their everyday pranks. As the crows explore every nook and cranny of the Westmont mysteries, many crow curiosities have been satisfied. However, the lighthearted crow adventures may have gone too far this time.

Crindiana Crones — a particularly inquisitive crow — recently started asking questions about what lies beneath Murchison Gym. Crindiana noticed Henri digging and sniffing at the dirt beneath him as students sat inside the gym for chapel.

After launching his own investigation, Crindiana discovered a large area beneath the gym, evidenced by the concrete walls framing the structure, without any conceivable way to enter. Crindiana grabbed his trusty Wisteria stem and his Oak Leaf hat and set to work.

His first mission was to free Henri from his leash tied to the light post, hoping to team up with the dog to dig to the secret chamber. Crindiana’s perfect opportunity arose at 10:30 a.m. on the Friday before Spring Break, as Henri dutifully sat outside the gym, but no students came to give him scratches or pets. Crindiana quickly untied Henri’s leash and the pair set off.

The two waited for nightfall, finding the campus even more silent than usual. It was as if the ghosts of Winter Hall were waiting for them, or maybe students were enjoying an early start to Spring Break. Henri sniffed out a soft patch of dirt and began to dig while Crindiana kept watch.

As Henri dug deeper into the dirt, Crindiana had to regularly chase off curious squirrels. Eventually, the dirt below Henri began to loosen and he fell into a dark pit below. Worried, Crindiana darted after him, but Henri had only fallen about three feet and was rolling happily in the dirt, waiting for a belly rub.

Crindiana Crones turned to the towering metal door in front of him and pulled out his trusty Wisteria whip. Despite pulling with all his strength, the flowers on the end were simply too delicate for the might of the metal. Henri smelled something strange and pushed the door open, continuing the investigation.

Inside, the pair wandered through rows of metal slabs. Crindiana flew up to get a better look. A frozen body lay on each slab, stuck mid-speech as if in the middle an illuminating illustration.

Strangely, the “lightbulb” moment presented itself in the exact same positioning of the arms and facial expressions of every person on the metal slabs. Henri jumped up on some of the frozen chapel speakers that would always give him pets when they came to speak, but this time they lay motionless.

Crindiana flew from one slab to the next, noting that each figure sported faces he recognized as speakers from chapel meetings all year. Each face had a name card above it. Some people he recognized, like Megan Fate Marshman and David Bailey, while others were more obscure.

Though all of the cards had a long list of dates on them. Some of the speakers even had the list wrapping around the length of their slab 10 times before coming to a stop. On the lists were dates, some past, most future. Crindiana scratched his feathery head until he reached his own “lightbulb” moment.

Each of the past dates represented each of that speaker’s appearances in chapel, so the future dates must be when they were going to speak next. He followed one particularly long list of dates and found that the one featureless figure simply named “Wheaton College Rep” was scheduled to continue to speak for the next couple hundred years.

During the investigation, another door opened on the far side of the chamber, revealing none other than Scott Lisea dressed in full hazmat gear. Crindiana and Henri ducked and scampered back to the tunnel.

In their mad dash, Crindiana’s leaf hat flew off his head, but there was no time to retrieve it. Hatless and fearful for his life, Crindiana Crones and Henri dashed out of their hole and off into the empty night. Perhaps someday the duo will return to discover what other dark secrets lie beneath Westmont’s surface.