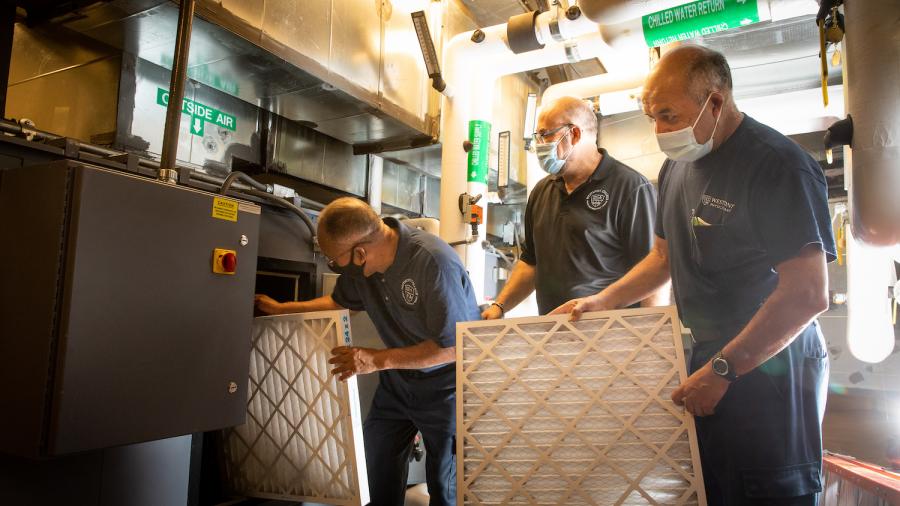 Julian Saavedra (right) on the job

When the shower drain clogs in the Westmont dorms, who comes to the rescue? Step onto the shuttle on any given weekend and meet Julian Saavedra, a Westmont employee who has been with the institution for the past 34 years and is an expert at solving Westmont’s water pipe woes. A skilled plumber and electrician, avid bicyclist and runner, and father of two children — one of them a Westmont alum — Saavedra lays claim to being the only continuing shuttle driver since 1988, when the shuttle program first began.

Born and raised in Michoacan, Mexico, Saavedra moved to Los Angeles with his wife at the age of 18. After working in LA for eight years, Saavedra moved to Ventura County, where he applied to work at Westmont. He became a custodian for one month, taking on a difficult night shift from 11 p.m. to 7 a.m.

However, another opportunity arose when the shuttle program began. Saavedra explained, “The one who was in charge of the shuttle program [said], ‘I need some shuttle drivers, so if any of you are interested …’ So then I raised my hand and said, ‘Well, I am — so what do I have to do?’ He says, ‘Study, take the class … and pass the driving test, and then you can start driving. And that’s what I did.”

For four years, Saavedra worked full time at Westmont as a shuttle driver during the school year and a custodian during the summer. Once the driving started to affect his back, he applied to work in trades at Westmont.

Trades, Saavedra said, include mainly plumbing and electrical wiring, but also, “a little bit of everything: if we have to patch a hole, [or] when I have to replace parts, like in the showers.” He received most of his training on the job.

Saavedra prefers trades to other jobs because “it’s more challenging.” He explained, “When I was in custodial, [doing] a floor finish … was the hardest part. There is not much that you can learn. It’s kind of easy. But in trades, it’s a little more complicated because … you go and see a job and you don’t know exactly how you want to start. You say, ‘Well, what are my options?’”

Sometimes, Saavedra said with humor, his boss estimates that a job will take five minutes when he gives a work order, “and then you go to the job and you’re there two hours and you’re still … [figuring out] where you want to start, what to do. It’s challenging.”

Even so, Saavedra said the only “hard” part about working in trades at Westmont is the small size of the current department. He hopes Westmont will soon hire more employees. “One time,” Saavedra said, “we had a clog in Page … there was water everywhere on the floor, so I went to check it out.” He asked a fellow electrician to bring the proper equipment from the physical plant. As he stood there waiting for the electrician, he suddenly heard the whistling sound of all the water sucked down into the drainage pipes. When he checked the sinks and toilets, “everything was clear already.”

“I said, ‘Well, I started praying very hard, and it worked this time, so next time, let’s pray again.’ So the next time we had a clog somewhere, they said, ‘Hey, let’s call Julian [and have him pray] so that we don’t have to work very hard.”

Despite this humorous occasion, Saavedra also knows the exhaustion of working on a single work order for hours without progress. When this happens, he said, he likes to “go for a walk, breathe the fresh air, and say ‘Oh, it’s beautiful here.’ That way, I get out of being stuck going in a circle.” With a refreshed mind, he returns to the job, and “this time, it works.”

Although shuttle driving is not as challenging as trades, Saavedra still said, “I enjoy it.”

One aspect of shuttle driving Saavedra loves is selecting music. Though he personally likes to listen to cumbias in Spanish, on the shuttles, he prefers to put on music he knows is popular among students. Even on the busiest days when he starts to feel stressed, Saavedra remembers, “All I have to do is relax and drive to the beat of the music.”

He applies his problem-solving skills acquired from trades to shuttle driving. He said, “When I’m driving down, I’ll look at the traffic and start looking around [to find the best] route [back up].”

Beyond enjoying his work at Westmont, Saavedra said he likes to exercise, particularly biking and running. When he lived in LA, he ran multiple 5Ks and 10Ks as well as “two or three half marathons.” In one of these half marathons, he said he finished in second place, adding, “but that was because the three guys who were in front [of me] got lost.”

Running and training for races, he said, “was the way I knew most of LA [county], because every weekend we [ran] in a different city.”

He also used to bike 50 miles regularly around LA and the surrounding counties. He and a friend once biked from Orange County, about an hour south of LA, all the way to Santa Barbara. “It took us about six hours and a half,” he said.

Saavedra continues running in races as well as biking, whenever possible. He also enjoys spending time with family by having summer barbecues or by occasionally driving the 35-40 hours to Michoacan, Mexico — a three-day trip — to visit relatives.

During his time driving the shuttle at Westmont, Saavedra has seen Paseo Nuevo built, Santa Barbara traffic increase, and undergraduates whom he used to talk to on the shuttle — like Mauri Hayashida — come back to Westmont as professionals and professors. “Sometimes,” he explained, “[students] go to different universities and study and then they come back … and say, ‘Hey, I remember you!’ [and I say] ‘Yeah, I remember you, too!”

A friend to many professors, alumni and students, Saavedra continues to enjoy investing both in his work and in the wider Westmont community.