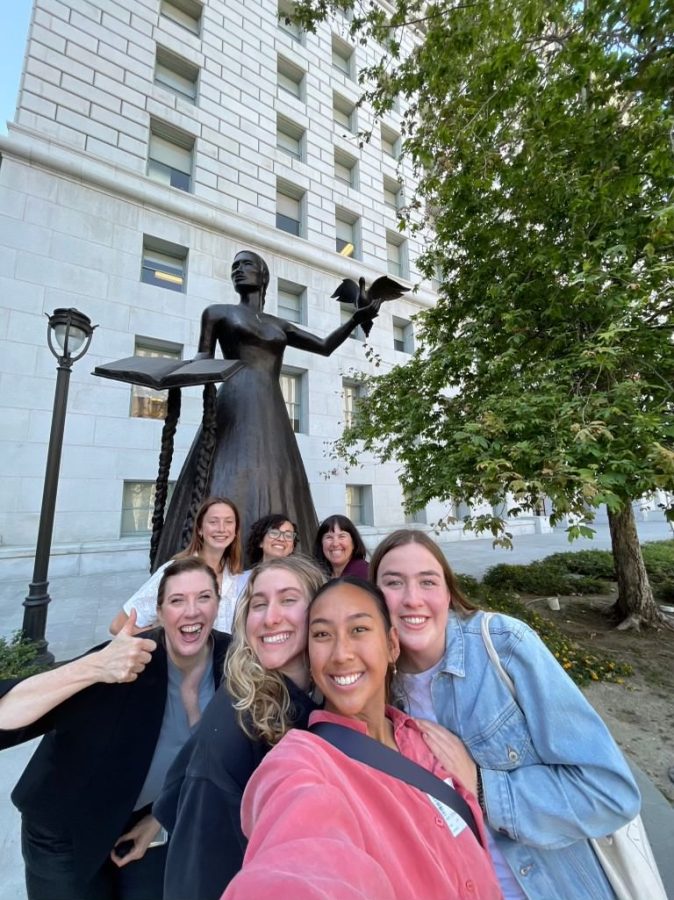 The UI Los Angeles group stands with Mary Glenn (back right) in front of the EMBODIED statue at the Los Angeles County Hall of Justice.

Urbin Initiative LA trip leader Sydney Azzarello summarized how this trip gave a group of five women “the chance to listen to God in the city, learn the many rhythms and ways God is working, as well as partner alongside and see the important work of many Christian organizations God is using there.”

The focus of the trip was on biblical justice, restoration and engagement in the ministry of presence, which included bearing witness to stories and being present in conversations in pursuit of deeper understanding.

Students partnered with Mary Glenn of Cities Together as she guided them around L.A. and helped facilitate connections and conversations. The group spent each night in tents on the roof of the Union Rescue Mission, located on Skid Row, where they cooked and served three meals to the guests of the mission throughout the week.

Each day, the women encountered a different part of the city. Mary Glenn led the group on a cultural city walk, which began in Skid Row and went through various neighborhoods in the city, including Little Tokyo and the Financial District. This part of the trip focused on both the intentional and unintentional messaging — including gentrification, architectural differences, access to green spaces and other structural elements — in various parts of the city.

For Hugoniot, this experience revealed a new and unexpected side to L.A. She appreciated being able to better understand the impact of intentional marginalization on the Los Angeles community and seeing each distinct part of the city’s culture.

Apart from the Union Rescue Mission, the group was also welcomed by other organizations in the city to witness what God is doing in L.A. Students visited InnerCHANGE L.A., which does local ministry and mission work in the diverse Westlake neighborhood. They also attended the Cathedral of Our Lady of the Angels, where they had the opportunity to talk about ecumenical work with Father Alexei.

Lastly, the women toured Homeboy Industries, a gang rehabilitation center, where they met with staff and the ‘homies.’

Conversations over the course of the trip routinely brought Hugoniot back to the idea of redemption. Students were deeply impacted by the openness and willingness of the women in the various ministries to share their life stories. Hugoniot explained, “It was impactful to see the joy people have because of God, but also hearing about where they have come from, the hardships, the awful things, and at the same time seeing them express so much joy because of God and how God was there through all of that.”

After learning about how to engage with God in the city and connect with local ministries, the Westmont women were able to return to Santa Barbara with the skills they acquired in L.A. Azzarello noted that, due to the proximity of Los Angeles to Santa Barbara, a lot of the same challenges exist in our own neighborhoods, albeit in less obvious ways. She emphasized that “having our feet on the ground and experiencing [urban challenges] made them so applicable” to parallel challenges here in Santa Barbara.